Are you entertained yet? Should we consider the whipsaw, v-shaped recovery in the stock market as being due to a Trump put, a Powell put, high-frequency algorithm trading delirium, or is all of it just a fugazzi? Here are a few articles, interviews, and excerpts to consider in chronological order before we move on to a technical analysis update on the Dow and S&P 500 ETF stock charts.

“The stock markets are not yet in a full blown bear market, but teetering on the edge. It is time to consider taking some profits off the table and sit in cash for a while. It does not mean you have to sell everything – just a percentage – maybe 20-50%, whatever works for you – a third generally looks good for the professional. There may or may not be a bounce into the end of the year. If it does, there is a high probability of a dead cat bounce… or come close to the most recent highs, but do not count on it. It is interesting that the Fed signaled a potential pause in interest rate hikes around the New Year as noted in a recent WSJ article (posted on the Fed’s website).”

“The Federal Reserve may have driven itself into a dead end of a one-and-done interest rate hike in Dec. 2018, and they are holding their noses over the stench of a 20% correction in the stock market. U.S. economic data metrics are deteriorating across the board as we approach the final months of a business cycle on the heels of a slowing global economy. If recent volatility in the stock market is any indication of what 2019 has in store for Main Street, the weakening global economy will put a final fork in the 10-year pig party and any hope for further U.S. economic expansion will grind to a screeching halt… A halt to Quantitative Tightening (QT) and the raising of interest rates will likely occur in a step-down fashion so as to not create panic in an already precarious TaperCaper situation.”

“’Much of the ammunition to fight a slowdown has been exhausted and governments will find it hard to use fiscal or monetary measures to offset the next recession, while the system of cross-border support mechanisms — such as central bank swap lines — has been undermined,’ warned David Lipton, first deputy managing director of the IMF. ‘The next recession is somewhere over the horizon and we are less prepared to deal with that than we should be [and] less prepared than in the last [crisis in 2008].’”

“Dec. 2018 turned out to be the worst December for Wall Street since the Great Depression…In a swift 180-degree policy reversal during the FOMC Jan. 30 announcement, Fed Chairman Jay Powell said the case for higher U.S. interest rates had “weakened,” when just last month the Fed raised rates and signaled it would do so again in 2019… The FOMC Dec. 2018 meeting minutes released on Jan. 9 revealed that four of the regional central bank governors agreed that the Fed should take its time to assess market volatility and risks to the economy before adjusting monetary policy any further. The Jan. 30 FOMC meeting vote was unanimous… There is no change to the process, speed, or mix of the Fed’s QT balance sheet normalization process with a $50 billion maximum monthly run-off of Treasury bonds and mortgage-backed securities. The Fed will continue managing policy with a system of “ample” reserves.”

“Only three short months ago, the Federal Reserve projected its QT rodeo to continue unabated, with reductions in its $4 trillion dollar QE’ased balance sheet, the deployment of maturing bonds back into Treasuries, and at least a few more interest rate hikes in 2019. At the conclusion of yesterday’s FOMC TaperCaper meeting, the prospect of normalizing monetary policy devolved into “japanification” possibilities with zero interest rate policy (ZIRP) and negative interest rate policy (NIRP) heaven around the next bend, as all of the QT ammunition was impatiently nuked into oblivion at one presser.

If we put ourselves in Powell’s shoes, he may be indefinitely pushing the pause button to blunt global contagion with a happy face, rather than focusing on negativity that could launch a self-fulfilling prophecy. Honesty from policy hacks would cause the markets to crash, consumers to stuff their mattresses with worthless paper, and a loss of confidence in central banking to maintain stability. Unfortunately, the Fed cannot risk its credibility, but ironically, it is doing so despite its best efforts to avoid inevitability.”

“A year ago, economic activity was accelerating in almost all regions of the world. One year later, much has changed. The escalation of US–China trade tensions, needed credit tightening in China, macroeconomic stress in Argentina and Turkey, disruptions to the auto sector in Germany, and financial tightening alongside the normalization of monetary policy in the larger advanced economies have all contributed to a significantly weakened global expansion, especially in the second half of 2018. With this weakness expected to persist into the first half of 2019, our new World Economic Outlook (WEO) projects a slowdown in GDP growth for 70% of the world economy in 2019. Global growth softened to 3.6% in 2018 and is projected to decline further to 3.3% in 2019. It reflects negative revisions for several major economies including the euro area, Latin America, the United States, the United Kingdom, Canada, and Australia.” 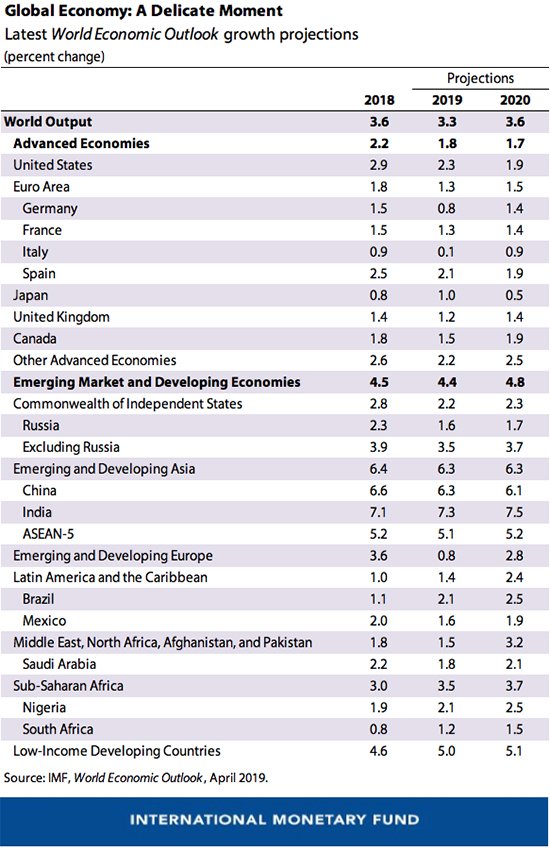 To view a larger version of the following charts, right-click on it and choose your “view image” option. 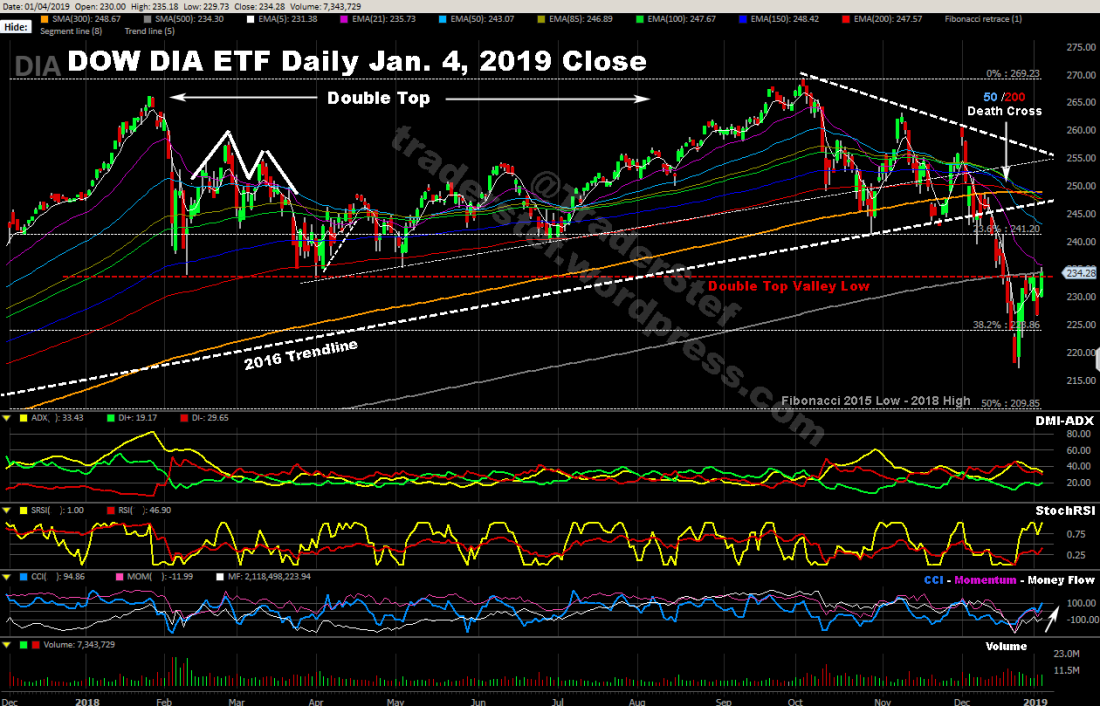 “The Dow may be in the midst of a Dead Cat Bounce after putting in a low the day after Christmas… The Dow will need to stage a solid 2,000pt rally from here and decisively take out the topside trendline drawn down from the Oct. 3 high in order for anyone to breathe easy. Even then, the Oct. high must be taken out with conviction for the 10-year bull to reassert itself instead of printing a Triple Top, and that requires a wicked 4,000pt+ rally from here. I suspect we will see every rally sold on strength as market players lock in profits on the heels of news cycles full of surprises from the political spectrum and global economy. I am cautiously bullish near-term but remain bearish overall because any rally may just be another Dead Cat Bounce in a string of chops.”

The pattern that developed on the chart since the Oct. 2018 high is an Inverse Head & Shoulders continuation. The Double Top is approaching Triple Top territory and may signal a market rollover if the price action does not advance to a new all-time high with conviction. The FOMC policy announcement on Jan. 30 of a pause in interest rate hikes and its balance sheet QT plan being under review set up a breakout from the Oct. 2018 trendline. A week later, the Dec. 2018 50/200 EMA Death Cross reverted to a bullish Golden Cross and a right shoulder followed. The left and right shoulders are riding atop a trendline drawn up from the 2016 low, and the right shoulder found support at the 50 EMA during price volatility in Mar. 2019. The price gapped up on Apr. 12 and closed with a bearish-leaning Hanging Man candlestick pattern. All of the studies are in a bullish trend and the moving averages are lining up for further gains, but the volumes have not shown conviction on the buy side despite the rise in price. A potential Triple Top challenge is playing itself out, and I recommend a neutral outlook until the current market dynamic resolves itself one way or the other.

“The $SPY looks very similar to the $DIA, with a lot of overhead resistance to conquer following the plunge in price…  Every rally may be sold on strength as market players lock in profits. I am cautiously bullish near-term but remain bearish overall as any rally may be a Dead Cat Bounce within a string of chops while the price struggles with overhead resistance areas that previously acted as support… The buy volumes are not great, however, the CCI, Momentum, and Money Flow indicators are itching for the rally to continue.”

The $SPY once again looks very similar to the $DIA and a Hanging Man formation at the Apr. 12 close. One exception is the threat of a Double Top instead of a Triple Top. I recommend a neutral outlook until the current market dynamic resolves itself one way or the other.