Silver is having a difficult transition out of a primary bear phase ever since it fell from grace following its April 2011 high of $49.78. Silver hasn’t outperformed gold since 2011, after silver transitioned from a primary bull to a secular bull phase in Sep. 2010. Despite the fact that gold transitioned a full year earlier in Sep. 2009 after breaking out of its notorious Inverse Head & Shoulders pattern that spanned 20 months, silver rocketed to its high a full five months before gold printed its Sep. 2011 high of $1,920.74. Gold outperforms silver overall, but when hi-ho silver gets its giddy up going on, watch out. Silver’s lower price point with large gains or losses exaggerate its percentage moves vs. the higher price points of its big brother, gold. Unfortunately, silver is currently nowhere close to the saddle of running wild. That does not mean it will not happen within a compressed timeframe, provided the ideal set of circumstances line up with the stars.

For a refresher on primary and secular bull vs. primary and secular bear phases, in Aug. 2016, I penned the following note on gold. It remains as relevant today as it did when written, with two updates. First, the 2011 trendline has been decisively breached to the upside at a lower price point than the $1,350 noted because as time passes, downtrend trendlines advance to lower price points. Secondly, a Golden Cross has taken hold on the weekly chart as of Sep./Oct. 2017….

“Doesn’t matter what analysts opine about with their market bull vs bear calls, it’s just noise. And I don’t pay much attention to who they are, legend or not. Chart history speaks truth, not opinion. Here is the bottom line on gold.

Gold’s primary bull (accumulation phase) began at the Aug. 1999 low of $251. The current secular bull launched in Nov. 2004 when the Feb. 1996 $417 lateral was taken out and held for several months. A primary bear began when in Apr. 2013, the $1,522 low on a Descending Triangle off the $1,921 high broke down magnificently, beginning in the European-Asian markets, and that bear continued until the Dec. 2015 low. We are now back in a primary bull phase since the 2013 trendline was decisively breached in Feb. 2016 without a violation off a Megaphone pattern. When and IF the 2011 trendline is decisively breached (currently at $1,350ish) and the $1,921 high is taken out, gold will re-assert its secular bull trend.

The most important time for the 50 Simple Moving Average (SMA) or Exponential Moving Average (EMA) is during a primary bull phase following a 50-200 EMA Golden Cross when a steady channel asserts itself. A Golden Cross on the daily took place in Feb. 2016 (Golden Cross on the weekly has not yet occurred). The 50 SMA or EMA on the daily may occasionally breach along the way, but that does not mean we’re back in a bear market. 50 SMA or EMA breaches are not rare in primary bull phases, as the 2009-2011 channel clearly exhibited. Breaches are BTFD opportunities in a primary bull phase. What the MOMO hedge fund money is waiting for is a decisive breakout from the 2011 trendline and a Golden Cross on the weekly. With all that said, ‘smart money’ has already entered and is accumulating due to NIRP and gold’s fundamentals.” – TraderStef Aug. 25, 2016

Is silver demand and industrial use on the rise? Yes.

Here are a few examples to each of those questions.

India Silver Imports Seen Extending Rebound From Four-Year Low… “Silver imports by India, one of the world’s top buyers, may keep rising next year after bouncing back this year from a four-year low in 2016, boosted by weak prices. Overseas purchases are estimated at as high as 5,500 metric tons in 2017 and may rise to about 6,000 tons next year, surging from 3,000 tons in 2016… ‘We are surprised by the recovery,’ said Sheth, who had expected a contraction in purchases at the start of the year. Shipments rose amid a rush to import more silver ahead of the implementation of the new goods and services tax in July.” – Bloomberg, Dec. 2017 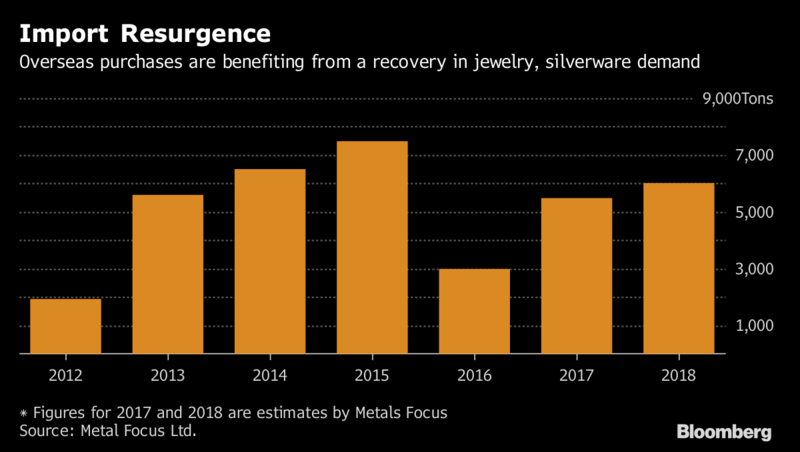 Plans for the World’s Biggest-Ever Solar Power Project Are Underway. Here’s What You Need to Know – Fortune, Mar. 2018

Global Silver Scrap Supply Falls To 26-Year Low… “Global silver scrap supply fell to its lowest level in 26 years. World silver recycling in 2017 dropped by nearly 50% since its peak in 2011. According to the 2018 World Silver Survey, global silver scrap supply declined to 138 million oz (Moz) compared to 261 Moz in 2011. While the lower silver price is partly responsible for the large drop in silver recycling, there are other market dynamics.” – SRSrocco Report, Apr. 2018

Silver Industrial Demand Rebounded in 2017; Mine Supply Recorded Second Consecutive Loss… “Industrial demand for silver, fueled by record photovoltaic growth, rose in 2017 for the first time since 2013. A stronger global economy led to healthy demand from the semi-conductor market, resulting in greater silver offtake in electrical and electronics applications as well as brazing alloys and solders. The jewelry and silverware sectors also experienced noteworthy gains in 2017. On the supply side, global mine supply fell for the second consecutive year, following an uninterrupted streak of 13 annual increases prior to 2016. Silver scrap supply, which has been in retreat since 2012, again registered a loss. These factors led to a tightening of the supply/demand balance, contributing to a physical deficit of 26 million ounces (Moz) in 2017, the fifth consecutive annual deficit.” – The Silver Institute, Apr. 2018

On to the charts. To view a larger version of any chart, right-click on it and choose your “view image” option.

When reviewing the current Commitments of Traders (COT) report, silver does appear more primed for a move up in price than gold, but when doing their spot price chart technical analysis, gold still looks stronger. The conundrum continues. 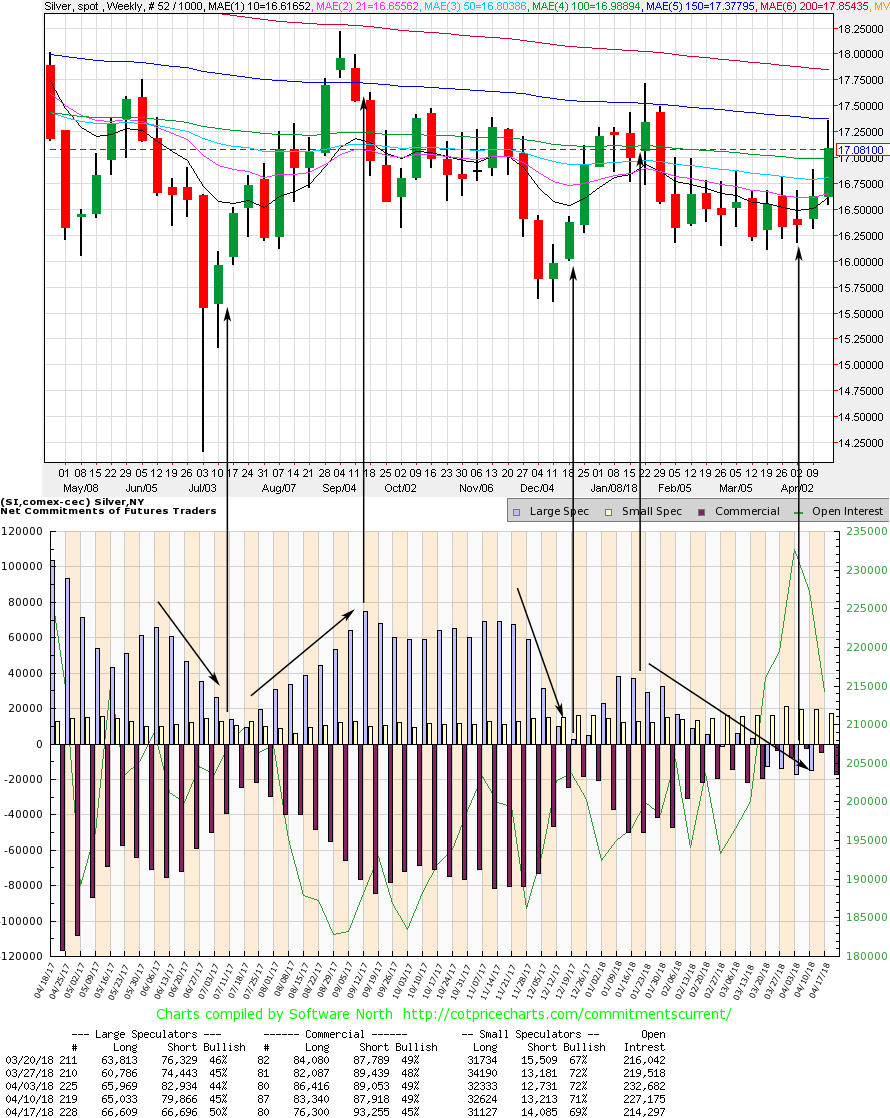 There is a lot of analysis floating around recently claiming that due to the current COT set-up, a huge move is imminent. That may or may not be the case because as you can see on the twenty-year spread, the current COT set-up does not guarantee an imminent or spectacular move to the upside. I have only emphasized two data points out of the many available on this chart: one from 2000 before it printed a $4 low in 2001, and another from 2010 when silver launched a rocket shot to the 2011 high, and that did not occur until $21.50 was taken out decisively.

Ugly may be an overstatement, but there is nothing spectacular happening in that chart. Look at it. Only a major short squeeze accompanied by some type of news that automated trading algorithms would read as bullish are going to break this pony. Silver is not going anywhere in short order until its big brother (gold) makes a decisive run at — and through — $1,380, giving silver a big, fat green light for a move up to and through the Fibonacci level of $21.50. I may be beating a dead horse, and silver stackers do not want to hear it, but that observation has remained true so far. That does not mean a huge move will not happen soon and within a compressed timeframe, provided the ideal set of circumstances comes to fruition. I watched it happen in real-time back in 2010 when the COT data was nowhere as bullish as it appears to be today. So where is the technical potential? Let’s dissect a close-up of the weekly. 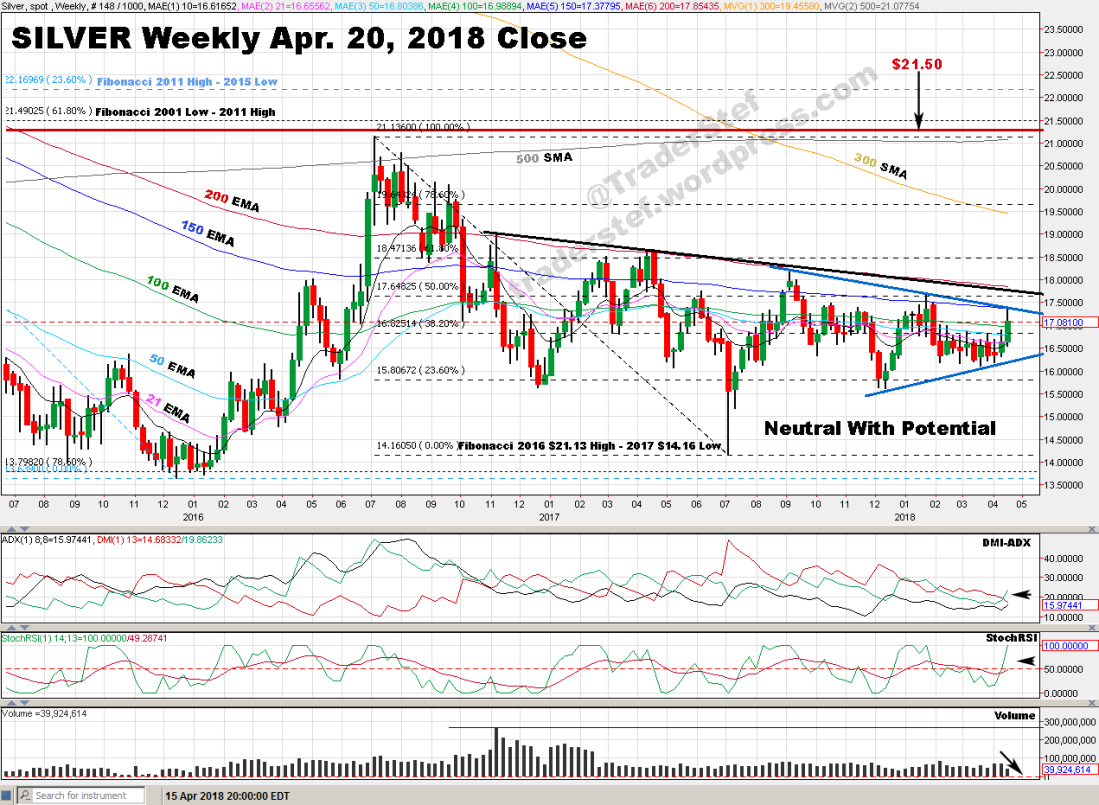 When we zoom in, there are a few positive developments. The 50 & 100 EMAs were taken out last week. The DMI-ADX is attempting a flip to the positive, and the StochRSI is spiking and peaking but might hang up there for a while if the price continues to make progress to the upside.

The negatives continue to weigh down on the price. Current overhead resistance is the 150 EMA, with a short-term trendline drawn down from Sep. 2017 sitting on top of it. The next resistance is a trifecta… a Fibonacci level at $17.65, the 200 EMA, and a longer-term trendline drawn down from Nov. 2016 sitting on top. The  Volume did not increase along with the price when compared to the previous week.

As noted on the big picture weekly, ugly may be an overstatement, but on this chart, the crashing Volumes while the price is rising are BIG AND UGLY. Perhaps a news item, a siren sound about fundamentals, or gold will come to silver’s rescue.

Finally, another reason I am leaning on gold to be silver’s savior right now is that silver is not the pony running with a positive seasonality time slot – gold is, and his technical charts look much better. 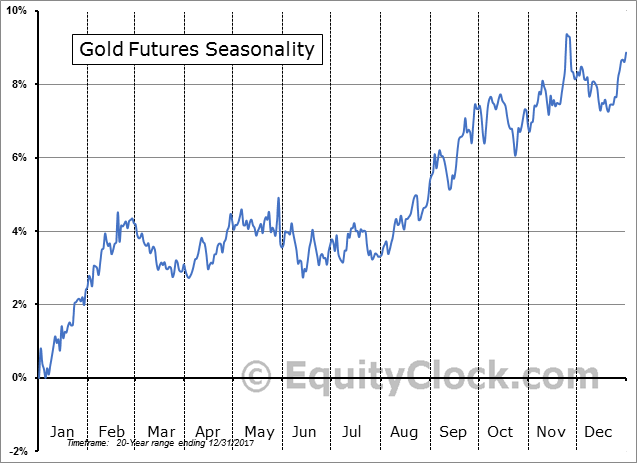 9 thoughts on “The Good, The Bad, and The Ugly for Silver”