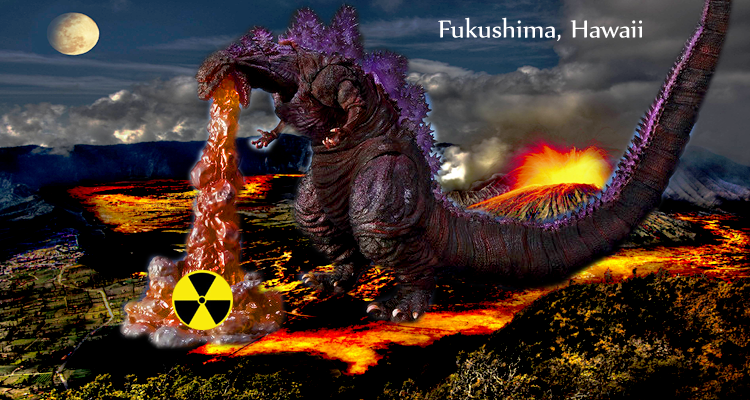 I am wandering off the main financial plantation today and throwing my two cents at the developing natural disaster of the Kilauea Volcano eruption and earthquakes with a magnitude as large as 6.9 on the “Big Island” of Hawaii. The closer you are to the event, the more likely the impact will be financial in some way. What happens to the ecosystems and dirt under our feet on this borderless Earth affect our health, way of life, and infrastructure for a sustainable modern society, all the while we are all striving to make a living.

The 2011 Fukushima Daiichi nuclear disaster was the result of a 9.0 magnitude earthquake and subsequent tsunami, which seems to be a forgotten topic, despite how important it continues to be. The flow of facts and in-depth journalism have practically disappeared from the media over the last few years. The U.S. initially responded to the nuclear disaster by raising acceptable radiation levels, shutting down some monitoring stations, and a multitude of pundits were feeding the sheep by pretending that radiation is good for us. 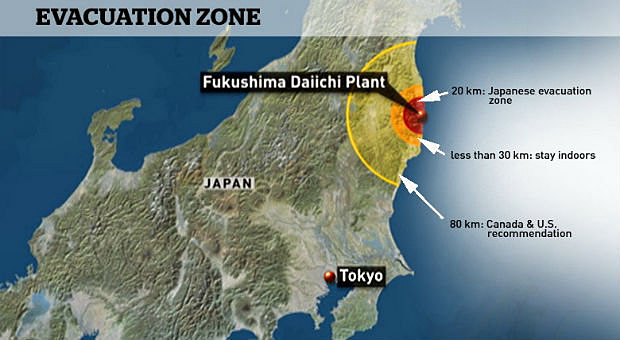 With the Forbes fantasy in mind, here is a clip from Thom Hartmann’s (bio) RT show from 2011, The Big Picture, less than a week into the Fukushima Daiichi disaster. The damage and radiation emitting from multiple reactors have proven to be much worse than previous estimates, with three confirmed meltdowns, and Reactor 3, fueled by plutonium, (MOX) blew its top, which is two-million times more deadly than enriched uranium. The key takeaway from this report with Thom is that “there is no such thing as a safe level of radiation.”

At the time of the accident, huge amounts of radionuclides were released into the Earth’s atmosphere and the Pacific Ocean. Here is a simulation from NOAA’s HYSPLIT model showing a continuous dispersion of particles at a rate of 100 per hour, representing the Cesium-137 emitted from Fukushima Daiichi. Cesium-137’s long half-life of 30 years, high-energy radioactivity, and chemical reactivity make it a particularly dangerous fission product. Each change in particle color (red, orange, yellow, cyan, green, blue, violet, magenta) represents a decrease in radioactivity by a factor of 10. Decay is not a factor in this short-duration simulation compared to its long half-life. Emissions occurred from Mar. 12-31, 2011, but the particles are followed through the end of April using additional meteorological data.

In Dec. 2014, the Japanese government approved a controversial secrecy law so that journalists and whistleblowers can face imprisonment of up to 10 years for revealing vaguely defined “secrets.” That influenced the recent lack of on-the-ground and in-depth reporting on the Fukushima disaster.

Crippled Fukushima Nuclear Facility: Record High Fatal Radiation Levels, Hole in Reactor Detected… “Record high radiation levels that’s lethal even after brief exposure have been detected at a damaged reactor at the Fukushima power plant in Japan. Specialists also found a hole, likely caused by melted nuclear fuel. Radiation levels of up to 530 Sieverts per hour were detected inside an inactive Reactor 2 at the Fukushima Daiichi nuclear complex… A dose of about 8 Sieverts is considered incurable and fatal… Speaking to RT, Yosuke Yamashiki, Doctor of Engineering from Kyoto University warned that the complete reduction of the radiation will take hundreds of thousands of years.” – Global Research, May 2017

Fukushima’s Nuclear Waste Dumped Into The Ocean, Japanese Plant Owner Says… “Takashi Kawamura, chairman of Tokyo Electric Power Company (TEPCO), told foreign media that nearly 777,000 tons of water tainted with tritium, a byproduct of the nuclear process that is notoriously difficult to filter out of water, will be dumped into the Pacific Ocean as part of a multibillion-dollar recovery effort following the Fukushima nuclear disaster in 2011.” – Newsweek, Jul. 2017

Fukushima Radiation: Days of Eating Pacific Ocean Fish Are Over, Or Worse… “TEPCO, the Japanese electricity company in charge of monitoring the plant, has admitted that radioactive material has been leaking into the Pacific Ocean from the defunct power plant for the past six years and that the problem is far from over. Anywhere between 300 to 450 tons of contaminated water have been released into the Pacific Ocean from the Fukushima Daichi site on a daily basis.” – DiscloseTV, Aug. 2017

Fukushima nuclear disaster: Lethal levels of radiation detected in leak seven years after plant meltdown in Japan… “The energy firm TEPCO found eight sieverts per hour of radiation, while 42 sieverts were also detected outside its foundations… Experts told Japanese state broadcaster NHK World that exposure to that volume of radiation for just an hour could kill, while another warned the leaks could lead to a “global” catastrophe if not tackled properly. It came as Tepco said contaminated water around the plant’s three reactors was seeping into the ground, causing major difficulties in the decommissioning process…. Mycle Schneider, an independent energy consultant and lead author of the World Nuclear Industry Status Report said ‘I find it symptomatic of the past seven years, that these energy companies haven’t a clue what they’re doing, so to me it’s been going wrong from the beginning. It’s a disaster of unseen proportions.’” – The Independent, Feb. 2018

What does the Hawaiian Island chain have to do with Fukushima? Consider the briefing I just provided and look at the Pacific Ocean currents… 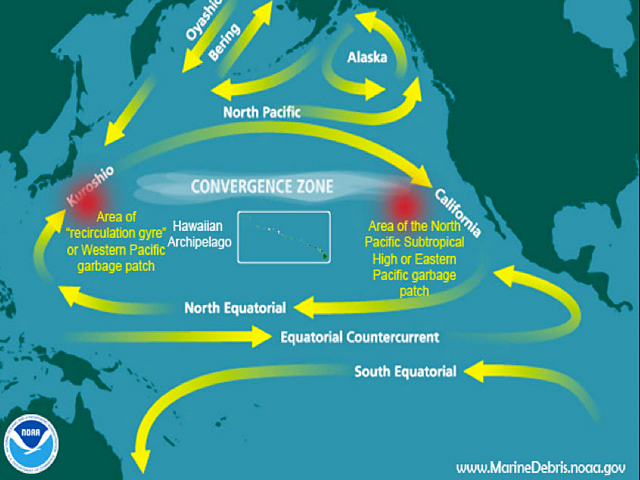 Hawaii is smack in the middle of “The Great Pacific Garbage Patch.” Not only has it collected plastics and miscellaneous trash for a century, but all the debris sucked off Japan’s mainland due to the tsunami and all the radiation have Hawaii in their bull’s eye.

Keala Kelly summed up her thoughts about Hawaii at this presentation.

Fertile Ground Environmental Institute – Colonization and Indigenous People… “For thousands of years we lived here before Captain Cook and his syphilitic merry men got lost. There were a million Hawaiians alive, and without any of this infrastructure. Now there’s 1.3 million people and look at the place. It’s a toilet. Americans think the Pacific Ocean is a toilet. Nobody even talks about Fukushima anymore. You know, when you’re in the pacific, you actually care about the fact that there’s almost no more fish, that the ocean is dying. It’s terrifying to be on the receiving end of this society, this culture. And because I’m Hawaiian, people go wait, wait, wait, hold it, hold it. you’re not supposed to be that angry… We need your help, this place is being murdered.” – Keala Kelly – 2014 Earth at Risk Forum, Nov. 2014

Over the last week, the world has witnessed mother nature’s destruction in Hawaii, with quaking, gassing, and volcanic lava bursting up through residents’ backyards in the subdivision of Leilani Estates, on the southeast portion of the Big Island, which is built upon the eastern rift of the Kilauea volcano. Imagine waking up to this in your backyard…

I am thinking the mayor and Chamber of Commerce are having their “Jaws” moment by getting out in front of a potential financial hit due to losing tourism revenues. Tourism is the lifeblood of Hawaii.

Then we have this, from Maui Now…

Affordable housing is the most crucial issue affecting our residents’ quality of life and their ability to economically survive,’ says Victor Geminiani, Co-Executive Director of Hawaii Appleseed in the release of the report, adding: “Speculators and investors have been eager to take advantage of the tremendously profitable vacation rental industry at the expense of our residents. We need to establish controls to protect our communities from fragmentation.” – Maui Now, Apr. 25

More from the report… 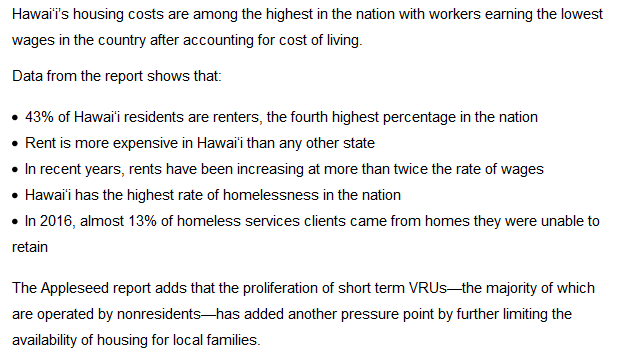 Why would anyone in his or her right mind buy into or build a residential community or major metropolitan area within striking distance of the most active volcano on the planet? Add that to all the radiation fallout the island chain is experiencing, and it makes you wonder why anyone would want to live or vacation there. This all brings to mind my recent article “Bubblicious Housing – Having the Brains to Walk When It’s Time to Walk.”