When speculating in the paper casino playpen we call markets or making actual gold or silver physical coin purchases, investors should be prudent in executing at lower price points within a low-risk, high-reward opportunity rather than blindly buying or dollar-cost averaging into overbought periods of volatility. Retail investors historically do the opposite by buying high and selling low, which is typically an emotional-based decision process, rather than using real-time information. Technical analysis provides insight to help avoid being burned when everything else seems to fail. Fundamentals are an important part of the equation, and for an investor or trader that is scalping (intraday trades), swinging (holding overnight or for extended periods of time), or laddering core positions (a type of dollar-cost averaging or silver coin stacking), if you are not doing due diligence by utilizing basic technical tools to read stock charts, you are definitely missing a yuge piece of the puzzle and may deserve what you get.

Why Retail Investors Almost Always Get Burned… “History shows time and again that retail investors as a group get easily caught up in the emotion of investing and let fear and greed dictate their actions.” – Financial Post, May 2014

Do not “Fund-A-Mental-Case” is how I describe it, as the markets have irreversibly changed over the last few decades and it is no longer your grandpa’s or dad’s market on many levels. Investors trying to sort through the mess with only fundamentals were left in the dust years ago. Depending on the source referenced, up to 85% of all trading in markets today is executed by automated trading platforms.

Just 10% of trading is regular stock picking, JPMorgan… “While fundamental narratives explaining the price action bound, the majority of equity investors today don’t buy or sell stocks based on stock specific fundamentals… ‘fundamental discretionary traders’ account for only about 10% of trading volume. Passive and quantitative investing accounts for about 60%, more than double from a decade ago… During 2009, about 61% of shares traded were executed by high-frequency traders (HFT).” – CNBC, July 2017

Chicago’s Open-Outcry Trading Floors… “Over the last decade, the frenzied screaming and hand-waving on exchange trading floors has started to go the way of the horse and buggy. The so-called open-outcry trading floors that symbolized the nation’s stock market and investment activity gradually have been displaced by computers and electronic trading… An estimated 85% of U.S. trading now is done electronically rather than live.” – Chicago Tribune, July 2017

Computer engineers now make up a quarter of Goldman Sachs’ workforce… “Goldman Sachs has hired about 9,000 engineers to help ensure that the bank keeps up with peers in the age of modern banking. For a company with just over 36,000 employees, the bank’s influx of computer engineers now represents approximately 25 percent of its entire workforce. ‘Ours is a business of information … pattern recognition and historical context are important,’ ‘Equity trading: 15 to 20 years ago we had 500 people making markets in stocks. Today we have three,’ President of Goldman said.” – CNBC, April 30, 2018

Fundamentals do remain a stable variable because they always win in the end, which is why I promote Fusion Analysis. Within the current automated trading environment, the new variables of algorithms, high-frequency trading platforms (HFT), and artificial intelligence (AI) are distorting the picture for fundamentalists.

It is important to note that algorithms are also parsing out specific words and phrases from texts of all newsfeeds and breaking news headlines and databasing articles for future reference to learn from past mistakes. That is why the Federal Reserve’s FOMC meeting announcements are accompanied by instantaneous effects on the markets in a fraction of a second.

Automatic sell stops or buy orders at preset prices can also work against you. They don’t always get filled when prices are moving quickly, leaving you behind, and in the worst case, they can leave you chasing a price in either direction because you missed your planned entry point in a long or short trade.

Keep in mind that algorithms in automated trading platforms can see all current orders in the queue, and HFT platforms intentionally move the price of a security just below or above a popular price point, then immediately reverse the price to capitalize on small gains – thousands of times per second. If you manually held your ground, rather than placing automated sell stops and buy orders for specific price points and kept in the loop of what’s going on in the markets instead of relying on the machines to make your trading transactions, you might save yourself a lot of money and aggravation. Nothing compares to being stopped out of a position one penny below your sell stop, then witnessing the price immediately rocket to a much higher price point.

Quants are also programming every possible technical indicator that has been developed, used, proven, and fine-tuned for over a century by seasoned traders, but the results they produce in the market can be hazardous to your financial health. An example is flash crashes that occur with regularity, sometimes daily on individual stocks, and they have become culprits behind well-publicized stock market plunges. Those are caused by several variables, but all have one thing in common: following the trails of preset buy and sell orders, and as liquidity dries up, huge gap-ups and gap-downs in the price manifest in the markets.

The reasons stated above and more are why technical analysis is so important today. You are investing and trading with the machines, so it’s best you get with the “program” (pun intended) and become familiar with the language.

Does technical analysis really work? Using candlesticks, trendlines, patterns, and a variety of studies to predict the future may sound like witchcraft, but technical analysis works most of the time (roughly 75%, sometimes more, sometimes less). Many technicians are part of large institutional investment teams that employ a mix of styles to find whatever works best, and those teams are shrinking as automation takes over. Technical analysis boils down to predicting the future by studying the past. In contrast, a fundamental analyst studies the actual nature of a security and attempts to quantify a security’s intrinsic value. The technical analyst assumes that all the fundamentals are already priced into the security and can be seen in the charts by a seasoned trader with a discernable eye.

A recent example of how effective fusion analysis can be is my recent analysis on silver back on Apr. 23rd, “The Good, The Bad, and The Ugly for Silver.”

One piece of information that was not included on the fundamental side of that story is the ridiculous silver hoard JP Morgan has accumulated since the silver price collapsed off its all-time high. Compare that to this year’s solar panel manufacturing and physical silver photovoltaic demand estimate at 140 million ounces, and that amounts to approximately 15% of the estimated silver production for 2018. That is slightly more than JP Morgan’s current hoard at the COMEX. 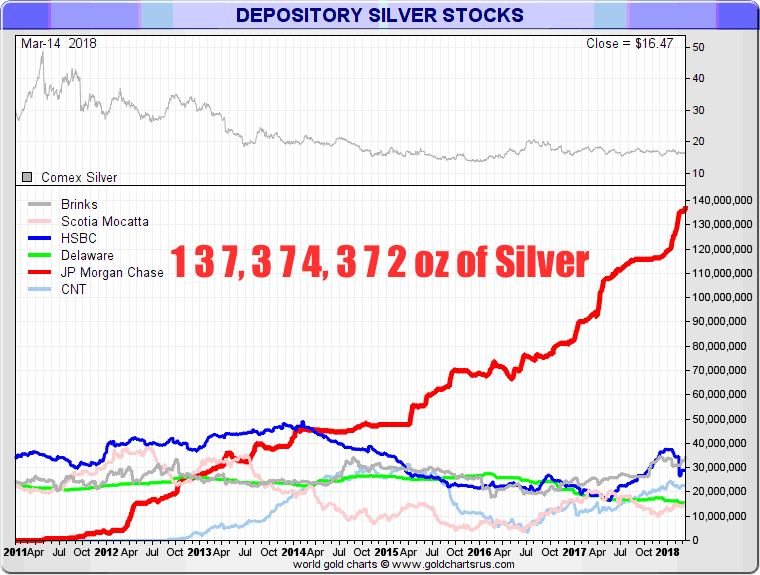 When reviewing the COT report, silver did appear more primed for a move up in price than gold, but when doing their spot price chart technical analysis, gold still looked much stronger.

“Silver is having a difficult transition out of a primary bear phase ever since it fell from grace following its April 2011 high of $49.78. Silver has not outperformed gold since 2011, after silver transitioned from a primary bull (accumulation phase) to a secular bull phase in Sep. 2010. Despite the fact that gold transitioned a full year earlier in Sep. 2009 after breaking out of its notorious Inverse Head & Shoulders pattern that spanned 20 months, silver rocketed to its high a full five months before gold printed its Sep. 2011 high of $1,920.74. Gold outperforms silver overall, but when hi-ho silver gets its giddy up going on, watch out. Unfortunately, silver is currently nowhere close to the saddle of running wild. That does not mean it will not happen within a compressed timeframe, provided the ideal set of circumstances line up with the stars.”

If you want to see what my complete analysis was, along with all the charts, go to The Good, The Bad, and The Ugly for Silver.  I’ll end this article with one chart found at the end of that article that put the final nail in the coffin for no silver rocket in the near-term. Silver collapsed $1.30 within days, from a $17.35 high to a $16.05 low. Depending upon your time horizon and goals, that was a BTFD opportunity for all the savvies thanks to some basic technical analysis tools.

“As noted on the big picture weekly, ugly may be an overstatement, but on this chart, the crashing volumes while the price is rising are BIG AND UGLY. Perhaps a news item, a siren sound about fundamentals, or gold will come to silver’s rescue.”

Here is my live interview with Dr. Dave Janda on his radio show yesterday, Sunday May 13th, where we discussed the topic of Fusion Analysis.