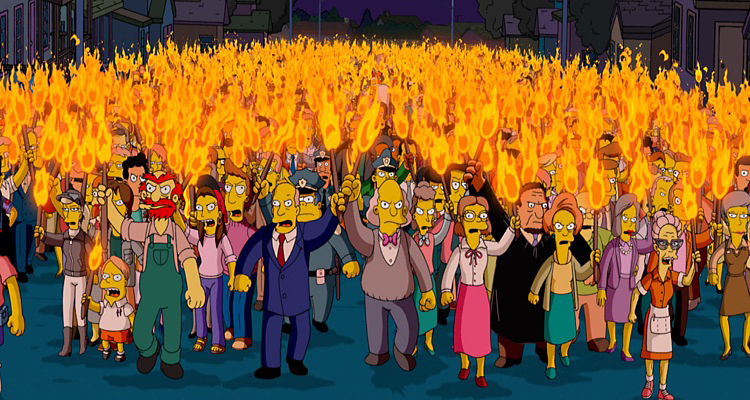 In addition to holding gold mining shares, Paulson’s position in $GLD as of Mar. 31, 2018 was 4,320,022 shares. During gold’s price run to its 2011 high, Paulson made an estimated $5 billion on his precious metal investments and remains a solid gold bull to this day, despite the bear phase that transpired up until the Dec. 2015 low, where it appears that gold finally entered another primary bull accumulation phase. The presentation given by Marcelo was chock full of nasty data and notes, pointing out that up until 2017, average shareholder returns on their gold mining investments were at -65% since 2010. 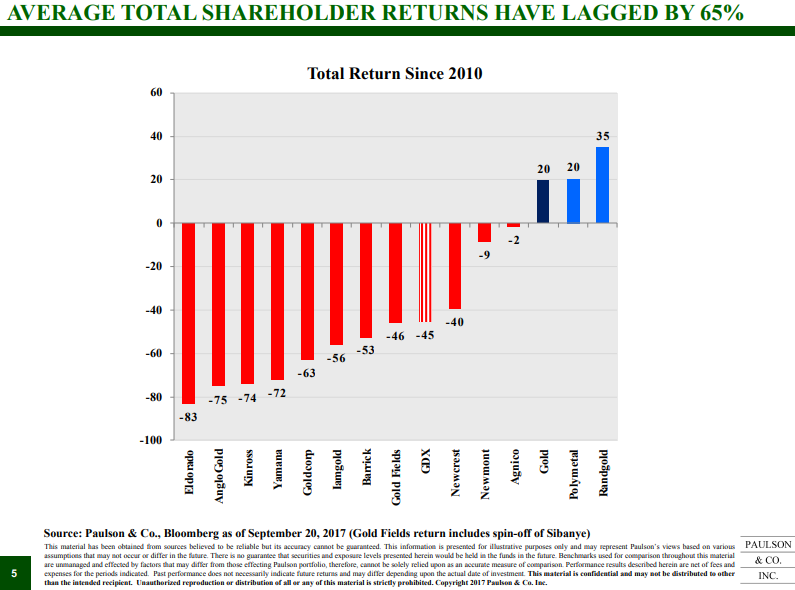 That period coincided with CEOs from thirteen of the largest mining companies taking home $550 million in pay as the price of gold appreciated by 20% and oil (as a large cost of mining) fell by 28%. His conclusion was a majority of global operations are poorly managed, and he was seeking out major investors in the gold mining sector to help address the poor performance for all shareholders holding the bag. The goal was to form a coalition and provide vote recommendations that included CEO pay and mergers and acquisitions, as well as other issues discovered in the process of formulating his presentation.

Marcelo not only took aim at mining management but also made clear that shareholders have no one to blame but themselves, describing them as “behaving like sheep being led to slaughter.” Instead, shareholders must embrace activism and demand accountability for compensation levels, especially for CEOs, in that they should align with returns to the shareholders and persuade the “booting out” of inadequate CEOs and board memberships. He said that “(shareholders) need to stop CEOs, boards and management enriching themselves at the expense of shareholders and prevent companies from embarking on the kind of acquisitions and budget blow-outs that have destroyed $85 billion in value just since 2010.” He also recommended that boards have more shareholder representation, noting that Paulson had recently secured board positions with two recent investments.

Contrast a hedge fund point of view with what I find most intriguing, and perhaps hypocritical to some degree, as there was no mention of any documented manipulation in the marketplace and how that affects bottom-line performance of mining company returns. Cartel suppression of gold and silver spot is obviously not the sole cause, although it would be helpful if the product a company produces is priced in a free market to offset the cost of production and provide the shareholder with a respectable return on investment.

There was no mention of high-grading reserves…

The automated trading platform environment has not been helpful, either, as it contributes to underlying issues that mining management may have and cartel suppression. For instance, I recall that during the run-up to gold’s all-time high, algorithms intermittently rotated within industry equities by shorting miners as silver and gold were run higher. That scenario still takes place from time to time for those with a keen eye to spot it on the bid-ask feeds and subsequent charts.

Gold Stocks Continue to Frustrate and Confuse Investors… “As I type this missive, the gold price is trading just $45 from a major break-out of a nearly five-year base. Yet for the second time this month the GDX is again selling down towards critical support at $21, which has been tested five times since early 2017 and was visited in mid-December when gold was nearly $100 lower.” – Kitco, Mar. 2018

A CEO out there who is vocal, on point, runs a ship-shape operation, and lacks support from mining executive colleagues overall is Keith Neumeyer. He was screaming from the rooftop long before any hedge fund guru had anything to say about the gold or silver price and mining companies’ performance.

First Majestic Mining CEO Keith Neumeyer: Damage Inflicted by Precious Metals Manipulation Is in the Multi-Billions… “Mike Gleason: I know you’ve been trying to recruit others in your space to come out against these price manipulation schemes – you spoke about that a moment ago. And you decided to hold back some of your production in the past, not release it onto the market because you believe the price was being suppressed. It is confusing to us how you can be getting so little support from your mining executive colleagues when it comes to raising a stink about the manipulation that is so clear. Now we’re not in the industry ourselves but we do follow it fairly closely. It seems to me if I were running a business that was being adversely affected by the schemes being carried out by some of these low-life traders and trading institutions to suppress the price of the product my company sells that I would be doing whatever I could to shine a light on these practices. But that’s not the case and it’s really just you that’s talking about this manipulation publicly. Why is that, Keith? Are they beholden to the same banks that were asking them to speak out against here? What is it? Keith Neumeyer: I just think it’s the characters of the individuals that run many of these mining companies. I’ve said multiple times that the executives that run mining companies tend to be conservative. The mining industry is a very conservative industry. It’s been an industry that’s always got its head down and trying to always do what’s right because often the mining industry does come under some extra scrutiny because it’s deemed a dirty business by some individuals. So, I think that mining executives tend to shy away from things that could put a spotlight on them or their companies. I’m just not of the same ilk. I think that it’s very important to speak up and it is frustrating for me that there aren’t more executives out there that are joining the fight because I do think it’s important.” – Money Metals Exchange Interview, Jan. 2017

Fast-forward to today, and we have this…

Hedge fund Paulson & Co nears launch of investor alliance to shake up gold sector… “The Shareholders Gold Council (SGC), expected to be launched as early as June, will have more than a dozen investors, including Delbrook Capital, Livermore Partners and Tocqueville Asset Management, one of the people said. Delbrook confirmed to Reuters that it will be part of the group. BlackRock Inc and Van Eck Associates, two of the biggest mining sector investors, are also in discussions to join the group of hedge funds and institutional investors, the source added. BlackRock manages about $6.3 trillion in assets. Paulson & Co had $8.7 billion in assets under management in January, according to regulatory filings.. Paulson & Co first announced its intent at an institutional gold conference last September. The alliance is unusual because there is no similar group of investors targeting a specific sector, activism experts say.” – Reuters, Jun. 2018

Gold Miners Need To Keep Plugging Away To Regain Investor Trust… “He added that he is still confused by silver’s lackluster performance, but said that at some point the market has to turn.” – Kitco, May 2018

I have concluded that industry players remain helpless no matter their knowledge of the situation. Although, anything is better than nothing in the activism department if it helps shake out the passivity trees growing around the precious metals industry. At the same time, investors should recognize that despite cartel headwinds and negative sentiment that can surround gold’s performance, since Dec. 2015, gold’s gains have been as high as 35% during this new bull accumulation phase. Speaking of bulls, remember the Egyptian billionaire who made headlines recently with his gold investment allocation? He is back and talking about gold mining stocks.