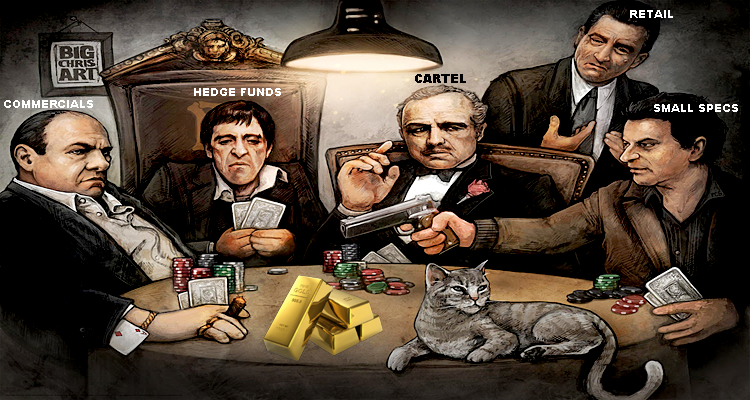 Gold’s correction since late winter 2018 will be remembered as a time when all fundamental and technical indicators had the bullish bias to crack $1,380. The price reluctantly chopped into a downtrend as it struggled to shake off every trade and currency drum of war due to MAGA geopolitical and domestic twists, and all of it had a positive impact on a USD that demanded its Dead Cat Bounce live out nine lives.  As with every correction in gold, too many folks get lost in the trees and do not look at the forest. That results in an emotional rut that blames every downturn or $10 fall on manipulation by the cartel, rather than studying the multiple forces at play in a complicated modern world. It is not so black and white anymore, and your PC and TV screens are in full color.

The stock charts do not lie. The odds can be stacked for or against your preferred trade trend, and the occurrence of cartel footprints are rare. The mindless automated algorithmic trading platforms are more responsible than anything the cartel could possibly pull off. The cartel is not God, as Goldman Sachs would have the Muppets believe, and the algorithms do not give a damn about your feelings or entry point in an investment or trade. If you are speculating in the precious metals arena rather than preserving your capital for the long haul, get with the “program” or get out of the kitchen. Only the big boys and girls play here, and you best have the stomach to deal with it. To view a larger version of any chart in this week’s analysis, right-click on it and choose your “view image” option.

“If price pivots off the current level, or even the next Fibonacci around $1,250, all is good.  Anything below that with conviction could precipitate a drop to the $1,210 level… The chart remains Bullish long-term and Neutral near-term, with opportunities to ladder additional core positions, as well as scalp any price spikes with volume.”

“Sudden shifts in volume characteristics always precede short-term or long-term trend reversals, or decisive continuations… The current increase is nothing short of incredible, and is a battle between large speculators, the bullion banks, shorts and longs.  Unprecedented paper positions on the buy-side of the ledger are humming along because it is a very low risk price zone from a fundamental and technical point of view. A potential SHTF event may be brewing in the global litter box and you are seeing it here first.  Chew on this catnip treat for a moment…”

“The price pivoted off the “line in the sand” lower trendline following a low of $1,237.94 at around 1am EDT on Jul. 3.  Any lower would cause technical damage, elongate any price recovery, and require a major rally to precipitate a massive short squeeze to shorten a price recovery… $1,240 to $1,260 appears to be the (big pockets) low-risk BTFD zone.” 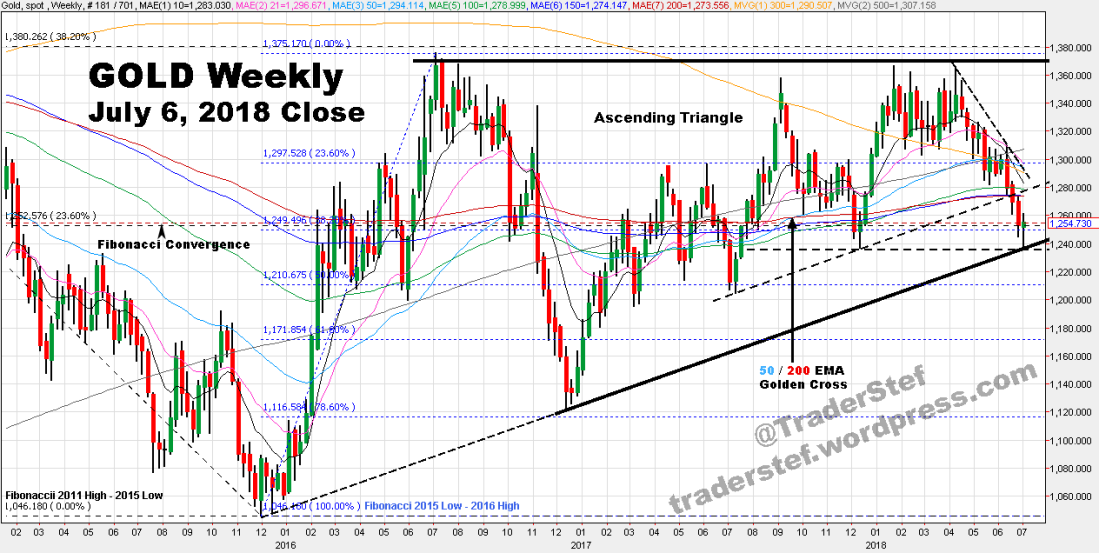 It is detrimental to the understanding of gold and silver price action to realize that smart money is always probing the opposite side of the trade, meaning they short the rising trend and momo plays, then ladder into long positions in the low risk zone (aka sweet spot) of downtrends.  Carefully read the following until you understand it without a doubt and can repeat from memory.  I inserted a few explanatory notes in parenthesis for the unseasoned.

“It really is quite simple but critical to understand this – bullion bank (commercials are smart money in this wash and rinse scenario) selling caps gold to the upside as they attempt to eat through the plethora of bids in a rising market. They cannot hold back the rise (momo play) in gold but they attempt to contain it. Once upside momentum begins to wane, the technical’s turn and then the hedge fund (large speculators) money begins exiting as longs are liquidating. It is into this long liquidation that the bullion banks do their short covering as they lift the shorts by buying them back. However, and this is the big key to understanding gold, the biggest physical buyers of gold on the planet (including the Eastern Central Banks) who only buy when they believe gold is now ‘cheap,’ step in and actually compete with the bullion bank buying. That forces these perma bears to rapidly cover shorts at a much faster clip than they would prefer. After all, if the speculative (large and small spec) crowd is in the process of throwing away their gold (particularly after a algorithmic or cartel arranged mini-puke at a key technical level), why get in the way? Let them throw away as much as they can and the bullion banks can leisurely continue their short covering letting the market sink lower and lower as they profit all the way down. The problem that they have is the huge physical market in gold prevents them from having the luxury of sitting on their hands while the market drops lower (sometimes nearing the miners’ average cost of production per ounce). Therefore, they are forced to buy back at a much faster clip. That is what drops the open interest down to near the same levels as the last upleg began but leaves the price at a much higher level than the initial breakout run.” – Trader Dan Norcini – Just the Facts Feb. 2010 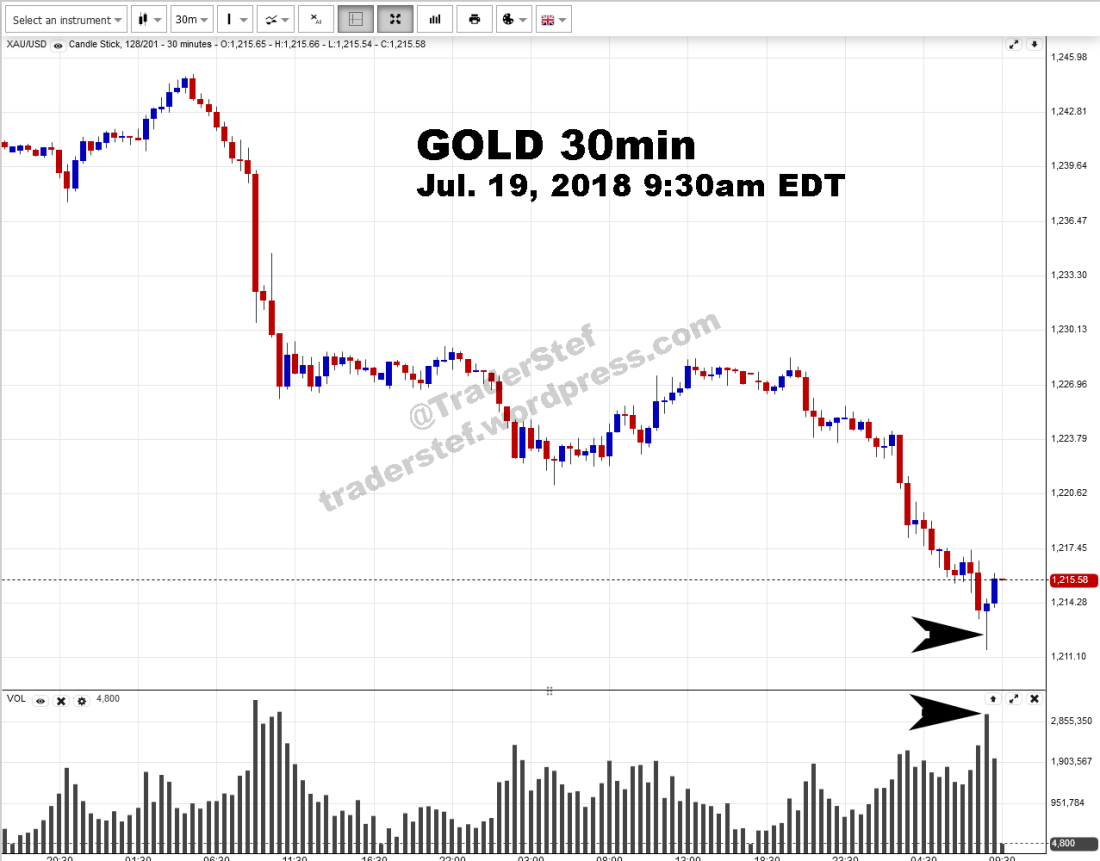 Commercials were busy covering shorts and adding longs throughout and below the low risk price zone of $1,240 – $1,260, and around the Open Interest (OI) low print in mid June. Here is the most recent Commitments of Traders Report (COT) data as of Jul. 17 and reported on Jul. 20, overlaid with the weekly gold chart as of the Jul. 20 close.  Note the COT net positions pattern of highs and lows, and total OI is the fine green line with its lows marked by arrows at the base vs. the gold price trends. A return to an uptrend in gold is well overdue due to oversold conditions. 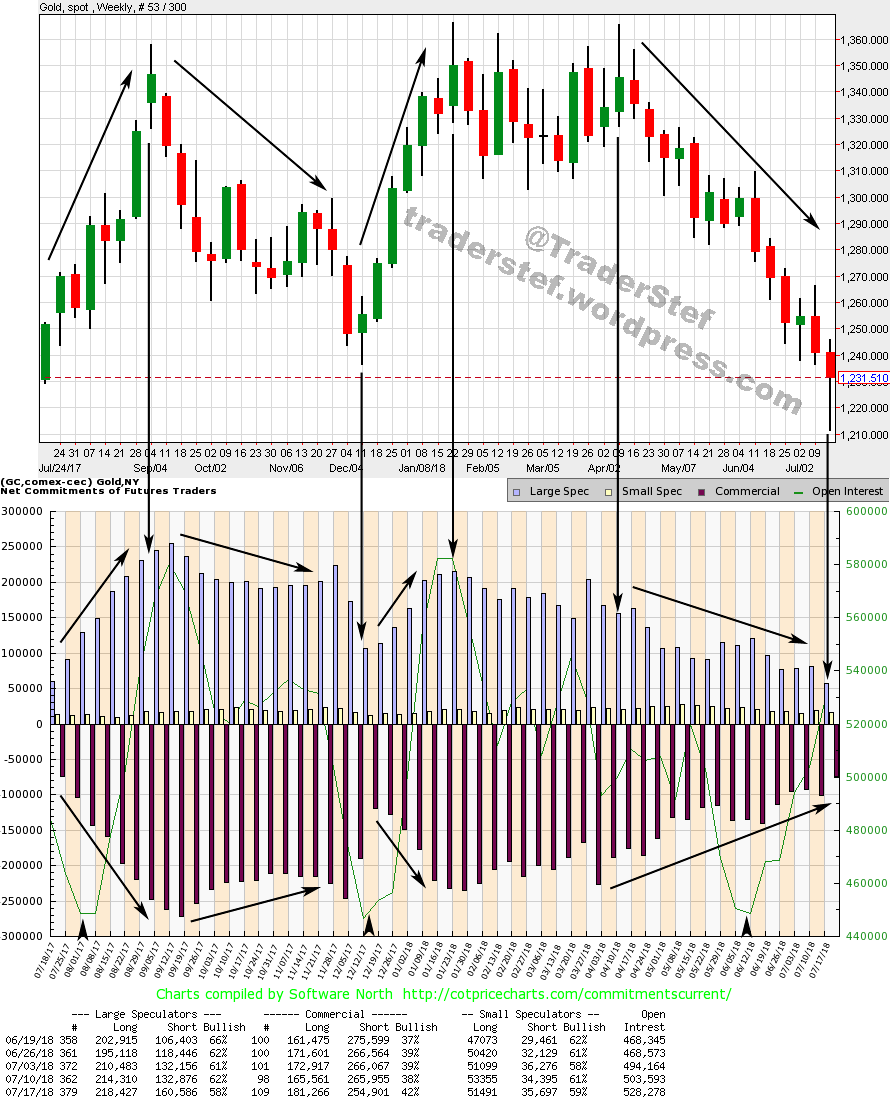 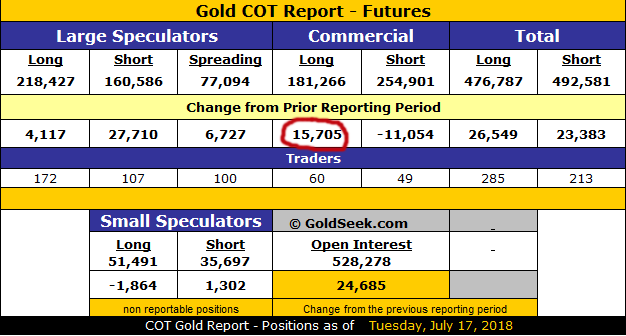 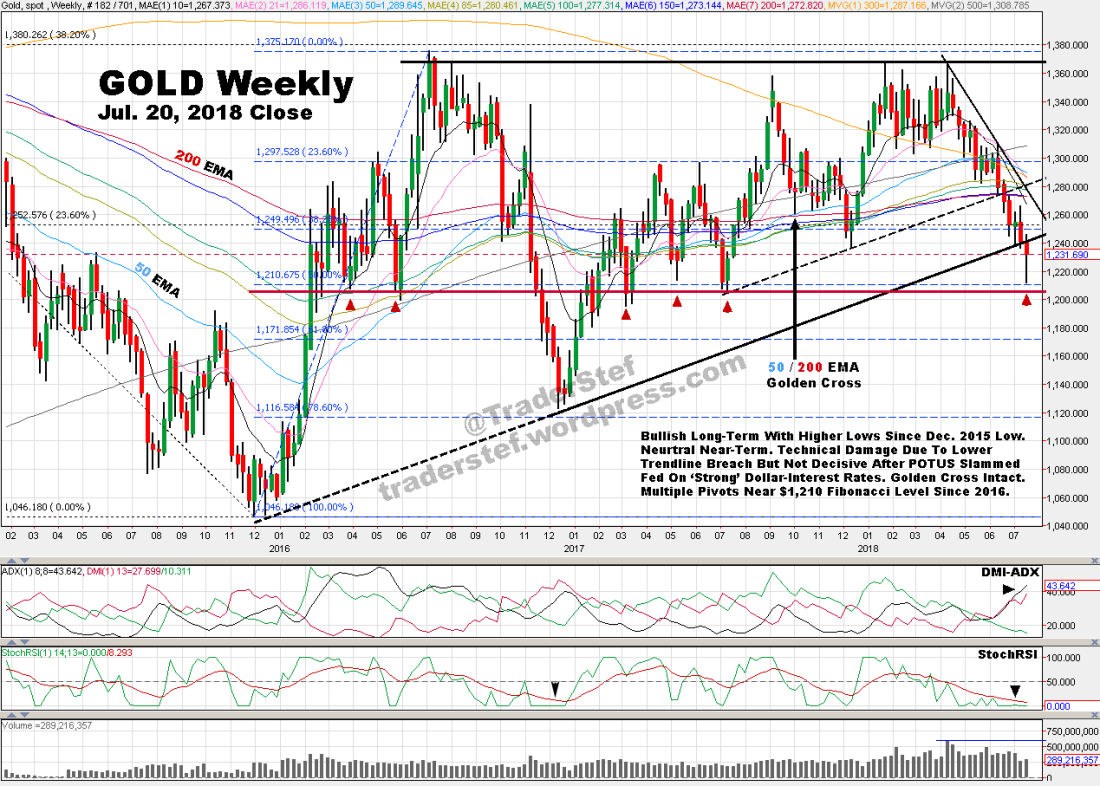 Serious technical damage has occurred, without a doubt due to a breach of the lower trendline drawn back to the Dec. 2015 low. Although, the POTUS appeared right on cue by slamming the Fed on Thursday and Friday about raising interest rates and a strengthening dollar, which precipitated a USD reversal and strong short squeeze in gold off the $1,210 Fibonacci level.  That broke the ice for a respectable retrace to a high by Friday of $1,232.27 and a close at $1,231.78 for the week, which printed a Bullish Outside Reversal pattern on the daily chart, and Friday’s Hammer Candle confirmation awaits as the OTC spot market opens this coming week. The close remained below the lower trendline but adds credence to my $1,210 call if $1,250 was breached decisively. There are multiple pivot points along the $1,210 lateral price level going back to 2016, where it provided strong support and has a good chance of being the case here due to the short squeeze and bullish COT report. Despite a Death Cross print on the daily chart, a Golden Cross remains in play on the weekly, with a $20 spread before reverting to a Death Cross. The DMI-ADX is approaching a peak, as the StochRSI remains in a prolonged oversold condition.  I remain bullish long-term as higher lows in the uptrend since Dec. 2015 remain in tact, and neutral near-term as geopolitics, monetary policy, and gold’s seasonal price pattern resolve.  Beware of a potential Bear Trap at the $1,210 lateral, as seen in Dec. 2015 through Jan. 2016.

Reminder #1: the SPDR GLD ETF is a lagging indicator.  “The investment objective of SPDR Gold Trust (the ‘Trust’) is for SPDR Gold Shares to reflect the performance of the price of gold bullion.” I have beaten that dead horse for years, but some folks continue to rely upon GLD inventory and technicals to explain or speculate about gold investment and trading decisions. Study the next chart carefully, which appeared on Twitter this past week with the following note: “This chart highlights/reveals the secret behind the gold plunge. Investors have sold their Gold ETFs.” The author meant well, but he is way off base. Savvies with eyes can see that GLD inventory levels follow gold spot, not vice versa, and they don’t determine the price. GLD is a NYSE 9-5 trading derivative, period. Gold OTC spot trades 24/7 beginning on Sunday evening through 5pm eastern time on Friday, with brief intermittent catnaps. Capeesh? 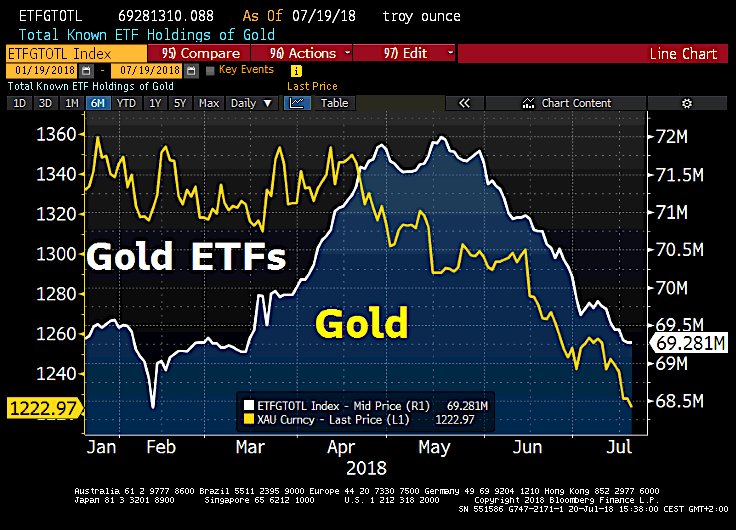 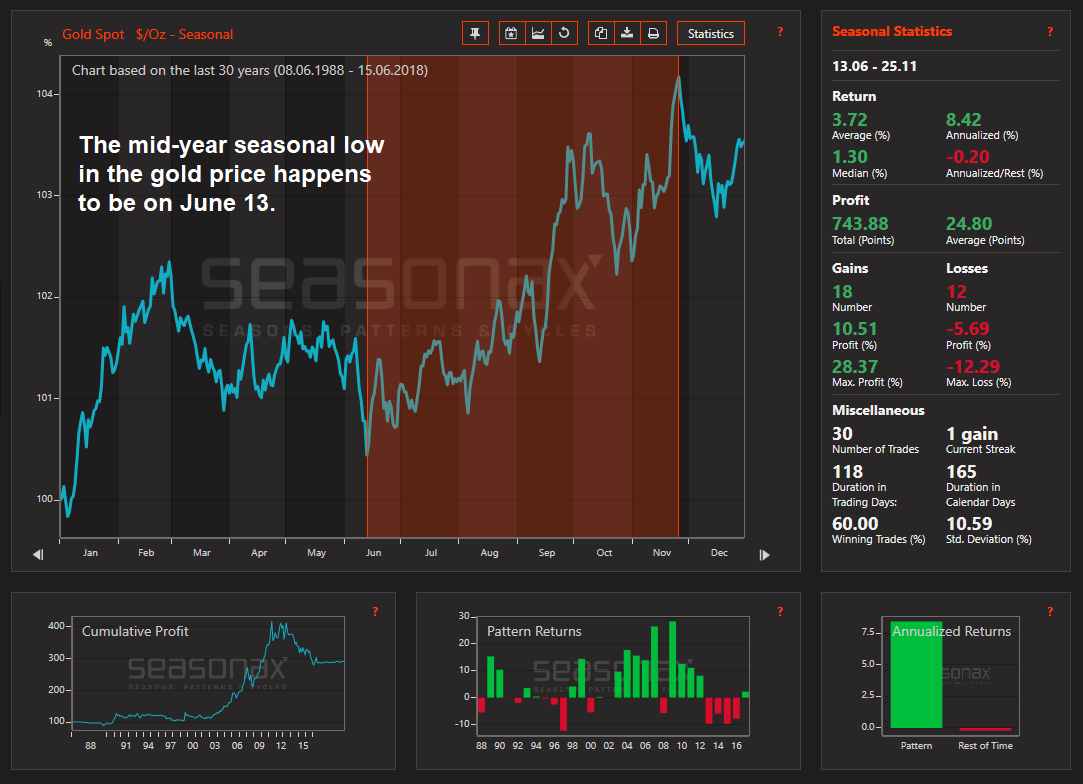 Lastly, a few relevant news items and charts to consider this weekend as the financial universe and mainstream media continue to struggle with “Trump Derangement Syndrome.” 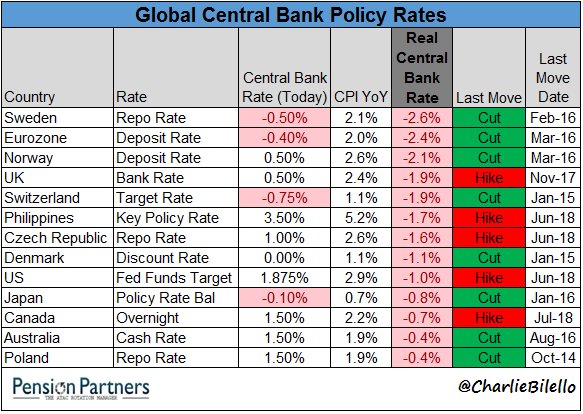 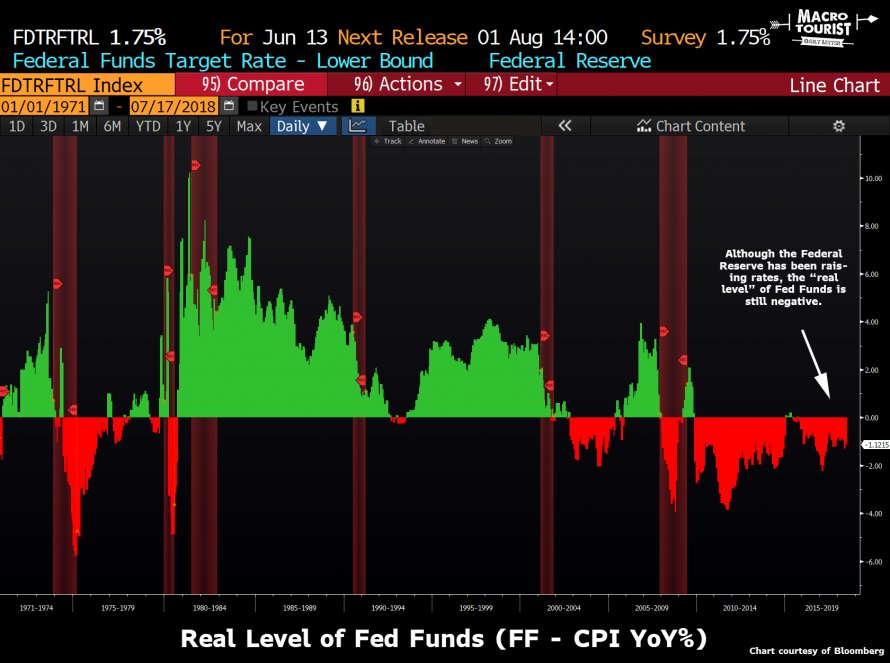 Trump Blasts Fed, Threatens to Put Tariffs on All Chinese Goods… “Trump says Fed tightening hurts what administration has done. President Donald Trump lashed out at China and the European Union for their weak currencies and said a stronger dollar and rising interest rates are undermining America’s ‘competitive edge,’ taking a fresh jab at the Federal Reserve. Trump also said he is prepared to impose U.S. tariffs on all Chinese imports. ‘China, the European Union and others have been manipulating their currencies and interest rates lower, while the U.S. is raising rates while the dollars gets stronger and stronger with each passing day — taking away our big competitive edge,’ Trump tweeted on Friday. ‘The United States should not be penalized because we are doing so well.’ In an apparent reference to Fed rate increases, Trump added, ‘Tightening now hurts all that we have done. Debt coming due & we are raising rates — Really?” – Bloomberg, Jul. 20 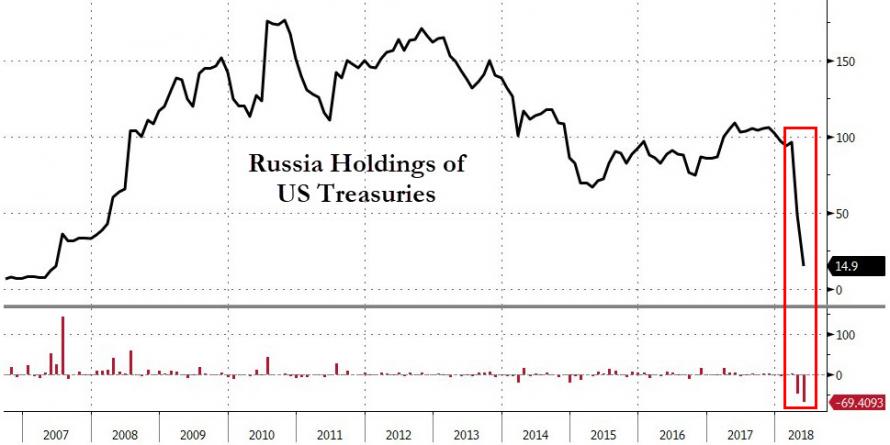 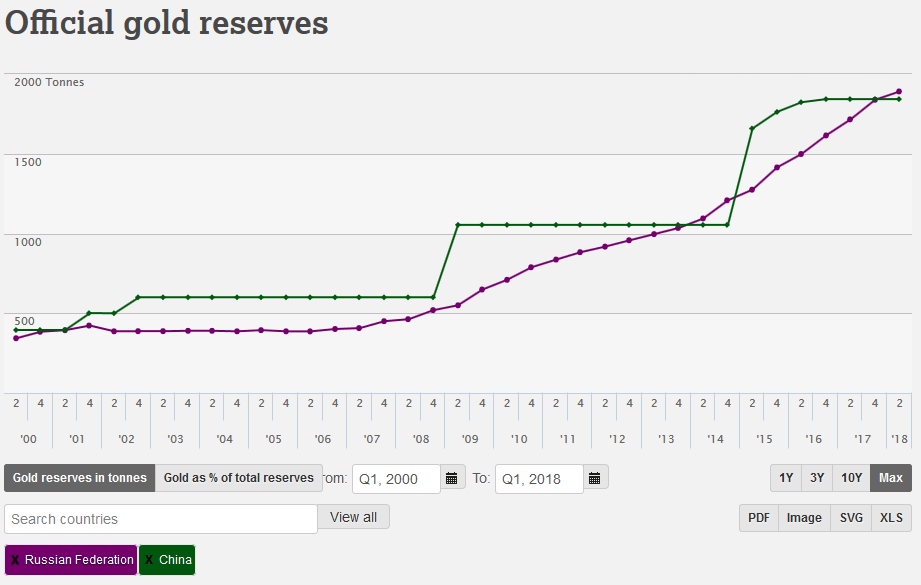 Headline art by Big Chris Art.  I added the gold and text labels.