The climate is definitely changing, as it always does, but how much is attributable to anthropogenic reasons is open to debate. One thing is for sure: that big ball of fire in the sky known as our sun is proven to be a huge factor. To drive the point home, here is an image for a size comparison.

I am not in the global warming camp, as evidence is beginning to confirm that we are actually slipping into a cooling period. Nobody knows with certainty what to expect in the distant future, nor can anyone be scientifically absolute about a fuzzy, distant past where we did not reside.

One factor over the last 20 years or so that may be contributing to the explosive wildfire phenomena is that our bodies and environment appear to be ingesting a witches’ brew of metallurgic nano-particulates that are being released from aircraft across the globe via chemtrail distribution due to a geoengineering agenda based on a global warming theory. My intent is not to explore conspiracy lane, as there are so many forks in this road, but only offer a small sampling of evidence to consider given the recent outbreak of explosive wildfires on drought-stricken topography around the globe. By the way, there are financial opportunities that can spring up from any natural disaster, but more about that later.

Weather Modification: Programs, Problems, Policy, and Potential… “In addition to specific research programs sponsored by Federal agencies, there are other functions related to weather modification which are performed in several places in the executive branch. Various federal advisory panels and committees and their staffs – established to conduct in-depth studies and prepare reports, to provide advice or recommendations, or to coordinate weather modification programs – have been housed and supported within executive departments, agencies, or offices.” – United States Senate Committee on Commerce, Science, and Transportation, May 1978

WMO Documents on Weather Modification… “In recent years there has been a decline in the support for weather modification research, and a tendency to move directly into operational projects.” – World Meteorological Association, Sep. 2007

Aluminum poisoning of humanity and Earth’s biota by clandestine geoengineering activity… “I describe evidence of clandestine geoengineering activity that has occurred for at least 15 years, and which has escalated sharply in the last two years. The geoengineering activity via tanker-jet aircraft emplaces a non-natural, toxic substance in the Earth’s atmosphere, which with rainwater liberates highly mobile aluminum. Further, I present evidence that the toxic substance is coal combustion fly ash. Clandestine dispersal of coal fly ash and the resulting liberation of highly mobile aluminum, I posit, is an underlying cause of the widespread and pronounced increase in neurological diseases and as well as the currently widespread and increasing debilitation of Earth’s biota.” – Dr. Marvin Herndon, PhD., Nuclear Chemist, Geochemist, and Cosmochemist – Current Science, Jun. 2015

The paper by Dr. Herndon goes on to discuss and cite publications that identified heavy metals like aluminum, barium, strontium, fly ash, and more in rainwater and the environment. Aluminum was detected in 77% of the samples, and there were very high barium and strontium concentrations. It also discusses how those concentrations are not the result of natural phenomenon, such as volcanic explosions or anthropogenic nuclear pollution. The particulates identified just happen to be the same metallurgy used in the formulation of nano-thermite explosives. Note that recent wildfires are burning at a dramatically higher temperature and that phenomenon is likely due to chemtrails settling out of the air and into the environment. They’re miniscule enough to be absorbed into the root structures of the forest, our bodies, as well as settle into the overall landscape as a fine dust. Keep in mind, the effect upon the ecosystem is bio-accumulative.

Here is a small sampling of U.S. patents related to weather modification modalities.

Pyrotechnic Composition… “The invention described herein may be manufactured and used by or for the Government of the United States of America for governmental purposes without payment of any royalties. The present invention is related to a pyrotechnic composition and method of preparation. An object of the present invention is the provision of a composition which has use in cloud seeding… The formulations used consisted of 30% binder, 50-70% silver iodate and 0-20% aluminum.” – U.S. Patent #3140207, Jul. 1964

Combustible compositions for generating aerosols particularly suitable for cloud modification and weather control and aerosolization process… “A combustible composition for generating aerosols for the control and modification of weather conditions consisting of a readily oxidizble substance selected from the group consisting of aluminum, magnesium, alkalimetals and alkaline earth metals… powdered aluminum found to be the most suitable metal, besides being relatively cheap, it may be considered inert at room temperature (this characteristic is an important factor for safety in the preparation and transportation of the described compositions), it yields remarkable heat of combustion which favors a good continuity of reaction and a good aerosol dispersion. Moreover it is available on the market in the suitable purity and particle size.” – U.S. Patent #3630950, Dec. 1971

In Jul. 2014, scientists, doctors, pilots, meteorologists, and others shared their concerns in northern California at a Shasta County Board of Supervisors hearing on chemtrails and geoengineering. Here is the short version of a 3-hour hearing found at Galactic Service:

A recent wildfire that made headlines from California was the Santa Rosa firestorm during the fall of last year, a time of year atypical for intense wildfire activity.

Santa Rosa fire: How a sudden firestorm devastated a city… “The inferno swept up over a wooded ridge, like many California wildfires do, but this one was different. Like a terror in the night, this wall of wind-whipped flames took direct aim for the heart of a city, not just the rural outskirts, not just the homes high in the hills or off the grid. The Tubbs fire — one of 14 wildfires that scarred the people and property of eight Northern California counties late Sunday and early Monday — incinerated dozens of city blocks in Santa Rosa, destroying so many of the trappings of suburban life; from the Hilton Sonoma Wine Country and Fountaingrove Inn to a technology park, from Applebee’s and Arby’s to Kmart and Kohl’s.” – Mercury News, Oct. 2017

Another wildfire with similar characteristics devastated a small town on the seacoast of Greece, where residents were forced into the sea at a moments notice.

Greece wildfires: scores dead as holiday resort devastated… “The worst wildfire to hit Greece in over a decade tore through a small resort town near Athens on Monday afternoon, killing at least 74 people, injuring almost 200 and forcing hundreds more to rush on to beaches and into the sea as the blaze devoured houses and cars. Huge, fast-moving flames trapped families with children as they tried to flee from Mati, 18 miles (29km) east of the Greek capital. Among the dead were 26 people whose bodies were found huddled tightly together close to the beach.” – The Guardian, Jul. 24

Behold the Carr Fire in northern California that has exploded in ferocity and size within the last 72 hours. The descriptions, videos, and images from fleeing residents and firefighters are horrifying.  Cal Fire stats have the fire at 83,800 acres or 127 square miles and 536 structures destroyed, with 4,978 threatened, 117 damaged, and only 5% contained. 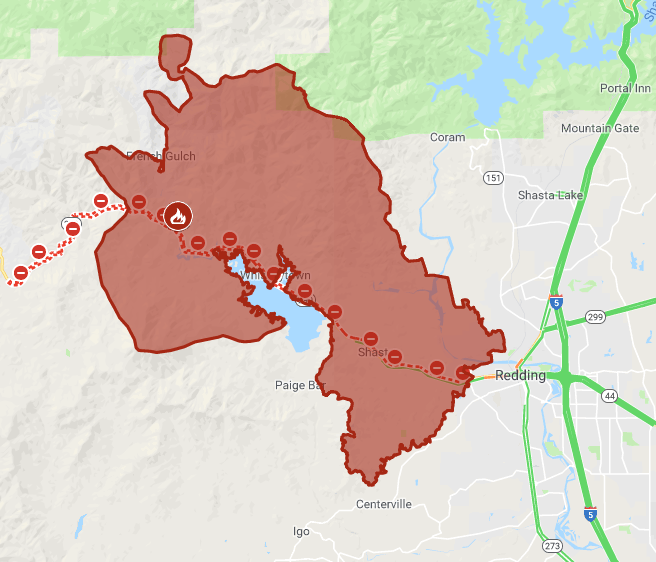 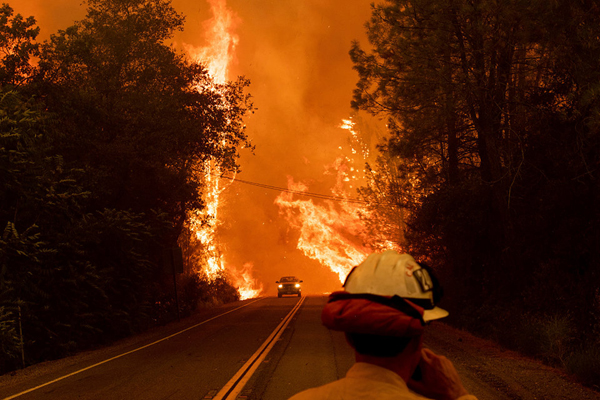 Trump Declares State Of Emergency As “Apocalyptic” Wildfire Devastates Northern California… “’Shadrac Herrera of Redding, 34, said he witnessed the upheaval.’ I saw a tornado of fire… I could hear it whistling and sucking up air and at the same time, it was growing. Incredibly scary” – ZeroHedge, Jul. 28

Carr Fire expands to 127 square miles in Shasta County… “It’s now the largest fire burning in California. The winds that aided firefighters in keeping the flames from more populated areas were propelling at a frightening rate in unpredictable directions. ‘I don’t know why it’s doing what it’s doing,’ Cal Fire Chief Steve Crawford said. ‘It’s burning in every direction all at the same time. … It’s burning as if it’s got strong wind on it even when there’s no wind’… Cal Fire officials said more than 10,000 firefighters were on the line… There are 14 large wildfires burning across California this evening” – Eyewitness News 7, Jul. 28, 8pm

Here is what a firenado sounds and looks like up close, confirmed as a firenado by radar signatures and Dr. Neil Laurea from the University of Nevada:

What do California wildfires have to do with Wall Street and investing?  Investment in water is a no-brainer. The wine industry may be impacted by smoke pollution settling into valleys across the state, so research is required to find all the companies and funds that invest in wine and then weigh the state of the global wine industry. The utility industry in California has taken a hit during recent wildfires and I imagine they will again as steel power line towers are pictured as melted heaps inside the Carr Fire. If you are into weather-related futures and options, there are derivatives available to trade at the CME. Also consider the ramifications for an insurance industry dealing with enormous claims, and we are not even into the heart of a typical fire season. Lastly, aluminum’s contribution to neurological diseases offers opportunity in the pharmaceutical side of Wall Street.

Anthropogenic factors, along with Mother Nature, have a way of creating bullish and bearish opportunities, but you must think outside the box and do the due diligence.