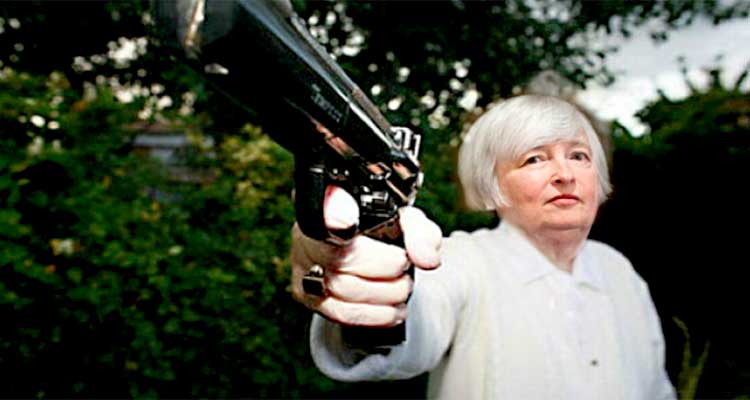 Remember when Yellen muppet’d us all by proclaiming another financial crisis in our lifetime was unlikely?

Banks ‘very much stronger’; another financial crisis not likely ‘in our lifetime’… “Speaking during an exchange in London with British Academy President Lord Nicholas Stern, the central bank chief said the Fed has learned lessons from the financial crisis and has brought stability to the banking system… ‘I think the public can see the capital positions of the major banks are very much stronger this year… I think the system is much safer and much sounder… We are doing a lot more to try to look for financial stability risks that may not be immediately apparent but to look in corners of the financial system that are not subject to regulation, outside those areas in order to try to detect threats to financial stability that may be emerging… we have a more appropriate system of supervision and regulation, hopefully for a good long time’” – CNBC, Jun. 2017

Former Fed head Janet Yellen warns of potential financial crisis ahead… “’I think things have improved, but then I think there are gigantic holes in the system,’ Yellen said in a discussion moderated by New York Times columnist Paul Krugman at CUNY. ‘The tools that are available to deal with emerging problems are not great in the United States.’ Yellen cited leverage loans as an area of concern, something also mentioned by the current Fed leadership. She said regulators can only address such problems at individual banks, not throughout the financial system… ‘I’m not sure we’re working on those things in the way we should, and then there remain holes, and then there’s regulatory pushback. So I do worry that we could have another financial crisis.’” – NBC News, Dec. 2018

There you have it in black and white. Forget Fed Speak slack that was so eloquently described by Jean-Claude Juncker in 2014 because when you own the Grand Poobah’s chair at the head of a bankers’ roundtable, “you have to lie.”

‘When it becomes serious, you have to lie’… “Mr Juncker, 59, was until last December the prime minister of Luxembourg and the EU’s longest serving leader until he was forced to resign last year in a bizarre scandal involving illegal phone tapping by the Grand Duchy’s secret service. Luxembourg’s fiscal policy and tax agreements with hundreds of multinational firms transformed his country from an economy based on industry to one based on finance.” – The Telegraph, Nov. 2014

The Financial Times in London just published an article on the potential corporate debt bomb.

Cracks in corporate debt market begin to show… “Storm clouds are gathering around the corporate debt market with investors eyeing higher borrowing costs, deteriorating credit quality and fraught trade conditions. In the US, about a quarter of junk-rated issuers are now rated at B minus or lower, up from 17% four years ago and the highest level since 2009, according to data from S&P, the rating group… A third of the US investment grade market has leverage ratios, a measure of a company’s ability to pay its debt, that would otherwise be considered as high yield. Leverage in corporate credit markets overall has increased to an extreme level since the Great Recession… The situation is worse in the riskiest corners of the market. Spreads for US issuers with triple C ratings or below have jumped 257bp since the end of September, hitting the highest level in nearly two years.” – FT, Dec. 9

The Fed is political and Yellen enabled the economy to simmer with near-ZIRP monetary policy until Trump won the presidency and Jay Powell took her job. The national debt doubled under Obama without a forthright complaint, but she is now suddenly concerned over debt and leverage.

“I found it to be reckless on her part to be so open about her views after being circumspect to the point of being silent for four years.” – DiMartinoBooth on FoxBusiness, Feb. 2018

Lael Brainard, a member of the Board of Governors of the Federal Reserve System, presented her insights with “Assessing Financial Stability over the Cycle” on December 7, 2018, at the Peterson Institute for International Economics. Listen carefully and remain focused on corporate debt and leverage from timestamp 11:58 to 21:35 in the video. For ease of viewing, you will find the three charts from that portion of the presentation just below the video. To view a larger version of any chart, right-click on it and choose your “view image” option.

If those charts on corporate debt and leverage are not clear, try the following for a basic overview. Corporate and non-corporate business debt in trillions from 1978 to 2017. 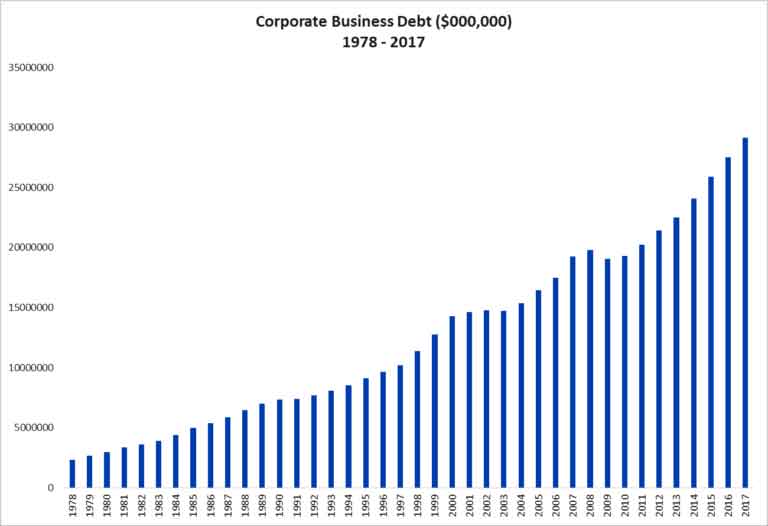 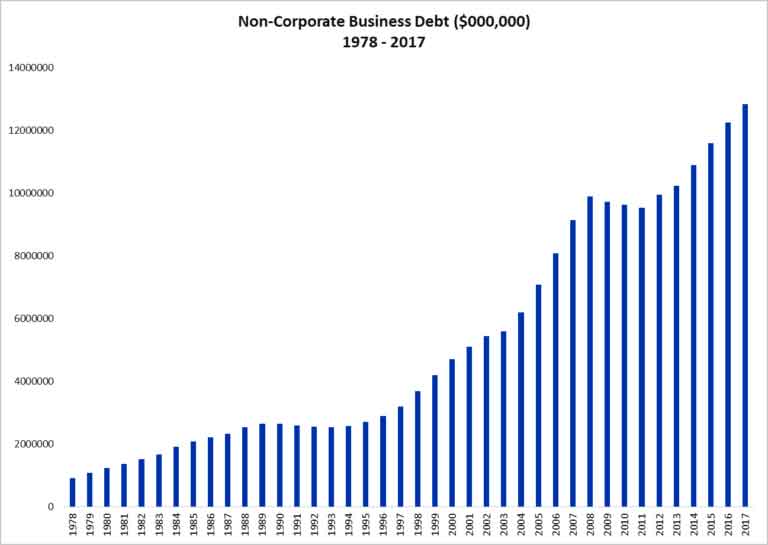 Here is a graphic from FRED of the nonfinancial corporate business and bonds liability level as of Dec. 6, 2018. 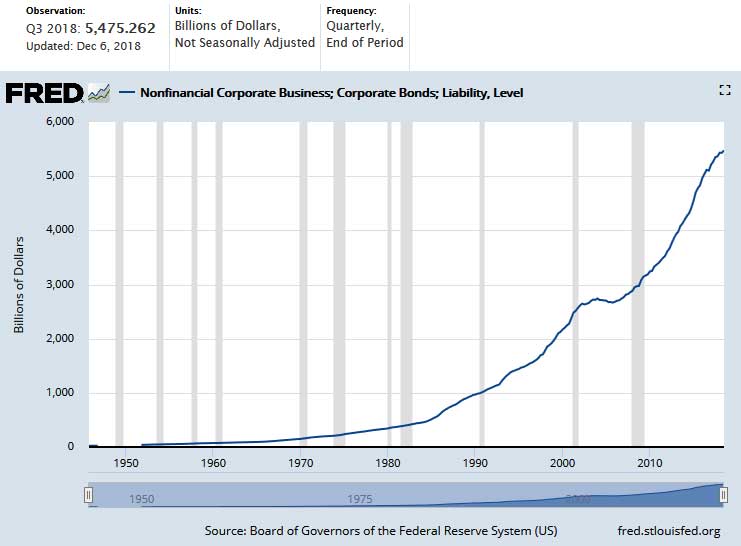 Pedro da Costa penned an article over at Forbes that suggests Lael Brainard’s solution that requires banks to raise more equity capital would be an excellent idea before it is too late. According to the Fed, the current Countercyclical Capital Buffer (CCyB) is a big fat zero.

This Simple Tool Could Help Prevent The Next Financial Crisis, Yet The Fed Refuses To Use It… “It makes sense for Brainard to be asking banks to strengthen their defenses now that the going is good. ‘At a time when cyclical pressures have been building and bank profitability has been strong, it might be prudent to ask large banking organizations to fortify their capital buffers, which could subsequently be released if conditions warrant,’ Brainard said in a speech last week.” – Forbes, Dec. 9

Kyle Bass is of the opinion that we need a $1 trillion infrastructure stimulus or we will be in a recession sooner than later.

“You know I think when you when you think about the net effect of the tax plan we think about it in the net rate of change of stimulus so in 20 18 net simulative effect of the tax cuts were roughly 250 billion dollars in stimulus to the U.S. next year it will be roughly 400 billion and then in 2020 will be 150 billion. So if you think about the rate of change from this year to next it will be plus 150 from 2019 to 2020 will be minus 250. And so my opinion is unless Trump gets a trillion dollar infrastructure plan put into place sometime early next year that it’s almost inevitable that we have a recession in 2020.” – ValueWalk, Dec. 12

Jon Hilsenrath from the WSJ highlights what a Duke University survey reveals about America’s CFOs’ economic outlook. 82% believe a recession will have hit by the start of 2020 and 50% expect the downturn to occur in 2019. CFOs are getting ready for a recession to hit within a minimum of 18 months because all the ingredients are in place. Here is a video clip from Fox Business.

Capping off today’s shooting gallery filled with elephant-sized debt, we have General Electric. GE has endured a dreadful year and its stock lost more than half its value. It can get a lot worse, too, because its power business is struggling as the finance unit consumes cash. GE is heavily reliant on its aviation arm that benefits from steady air travel bookings and vigorous engine orders, particularly from Middle East customers. Examples are the venerable and longstanding contracts with Saudi Arabia to fix and build airliners and a hefty deal cut with Turkish Airlines to build engines.

The current geopolitical atmosphere may not be kind to GE, and an economic slowdown across the globe while trade disputes remain a concern may precipitate more financial issues for that $60 billion conglomerate. Remember that during the last recession, more than a dozen U.S.-based passenger and cargo airlines filed for bankruptcy. Do not forget about GE Capital, either. To assist with financing the sale of engines, GE Capital uses its parent as a backup. That was a great set-up when GE carried an ‘A’ rating and could count on low interest rates. Unfortunately, ratings agencies have begun to downgrade GE after a $23 billion write-down in October that forced GE to slash its use of commercial paper.

As I type this article, the real-time U.S. debt clock is moving along at a stunning pace that will print $22 trillion within the next month or so. That should put the $30 trillion corporate debt-to-GDP ratio into perspective while the U.S. GDP is a paltry $20 trillion.

Keep calm and carry on, savvies. Got gold and silver? 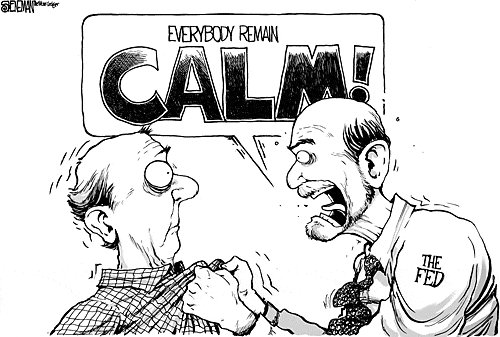 NONE of the content produced by TraderStef, staff members, or any services associated with this website should be construed as financial or investment advice. Financial investment is a risky endeavor and may lead to substantial loss. Always perform due diligence before undertaking any financial decision. Not a Financial Advisor.