I have not offered a technical analysis on silver for quite a while because the chart did not show any sign of life. When the gold bull lift-off took hold at the turn of the century, silver lagged behind like most little brothers do. Silver did not get its giddy-up going until $21.50 was taken out with conviction in Sep. 2010. That move launched a stellar run to its $50 high in Apr. 2011, five months before gold printed its high of $1,921. I have waited for gold to make a solid move beyond $1,250 again, as that would be a signal for silver to break away from its $15 lateral resistance. Silver appears to be making progress in that direction and has an opportunity to catch up to gold’s bull accumulation phase that began in Dec. 2015.

Before diving into the charts, the following items are worthy of a mention:

I will briefly cover the most recent Commitments of Traders Report (CoT) for Silver.  On Oct. 16, I published “Gold Short Squeeze Out of a Commercial Bear Trap” and covered the trading dynamics behind the CoT. Simply replace gold with silver in the following excerpt:

“It is detrimental to the understanding of gold and silver price action to realize that smart money is always probing the opposite side of the trade, meaning they short the rising trend and momo plays, then ladder into long positions in the low-risk zone of downtrends. Carefully read the following until you understand it without a doubt and can repeat from memory. I inserted a few explanatory notes in parenthesis for the unseasoned.

“It really is quite simple but critical to understand this – bullion bank (commercials are smart money in this wash and rinse scenario) selling caps gold to the upside as they attempt to eat through the plethora of bids in a rising market. They cannot hold back the rise (momo play) in gold but they attempt to contain it. Once upside momentum begins to wane, the technical’s turn and then the hedge fund (large speculators) money begins exiting as longs are liquidating. It is into this long liquidation that the bullion banks do their short covering as they lift the shorts by buying them back. However, and this is the big key to understanding gold, the biggest physical buyers of gold on the planet (including the Eastern Central Banks) who only buy when they believe gold is now ‘cheap,’ step in and actually compete with the bullion bank buying. That forces these perma bears to rapidly cover shorts at a much faster clip than they would prefer. After all, if the speculative (large and small spec) crowd is in the process of throwing away their gold (particularly after a algorithmic or cartel arranged mini-puke at a key technical level), why get in the way? Let them throw away as much as they can and the bullion banks can leisurely continue their short covering letting the market sink lower and lower as they profit all the way down. The problem that they have is the huge physical market in gold prevents them from having the luxury of sitting on their hands while the market drops lower (sometimes nearing the miners’ average cost of production per ounce). Therefore, they are forced to buy back at a much faster clip. That is what drops the open interest down to near the same levels as the last upleg began but leaves the price at a much higher level than the initial breakout run.’ – Trader Dan Norcini –Just the Facts, Feb. 2010 “”

Here is one year of CoT data overlaid with the weekly silver chart. Extremely lopsided positioning has taken place since Sep. and is beginning to normalize and produce an upside trend in the price.

I will start with silver’s monthly chart and drill down through the daily and weekly.

At first glance, a bearish Head and Shoulders pattern drawn back to 2005 with its up-slope neckline is obvious and concerning. The neckline is sitting above the current price and sets up resistance near $15.50. The next level of resistance is $16, where the confluence of a trendline drawn down from the 2016 high and the 21, 50, and 200 Simple Moving Averages (SMA) are fused.  At the base of the right shoulder, a potential Adam & Eve Double Bottom confirms if $16 is taken out decisively on buy volume and price. The StochRSI has turned positive, which provides a window of opportunity for the price to return above the neckline. Getting back above the neckline is necessary to make progress in voiding the bearish Head and Shoulders threat. Lastly, notice how the $21.50 Fibonacci level was an inflection point for the 2010 breakout and influenced resistance at the 2016 high. 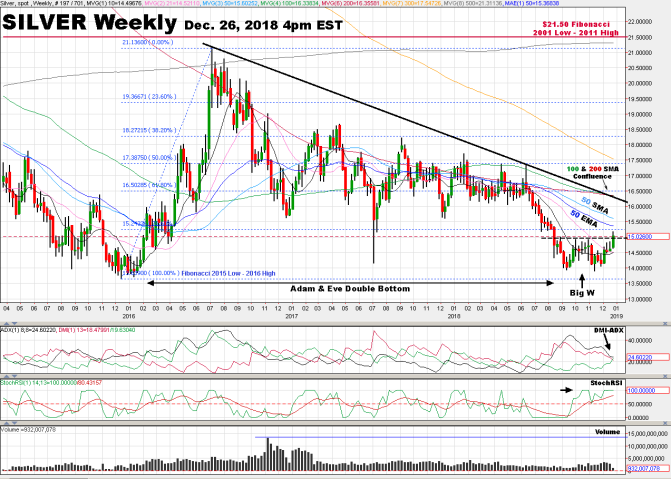 I added an additional set of Fibonacci levels within the weekly, drawn between the 2015 low and 2016 high. Today’s high at $15.17 is just below the 78.6% Fibonacci at $15.24. The Adam and Eve Double Bottom candlestick details and the bullish Big W pattern that developed on its right side since late summer are clearer on the weekly. Today’s bullish price action resulted in a break above the Big W neckline. Note that both the 50 Exponential Moving Average (EMA) and 50 SMA are included on the weekly and sit within the resistance levels noted on the monthly. A confluence of the topside trendline drawn down from the 2016 high and the 100 & 200 SMA are sitting just above the $16 level noted on the monthly. The DMI-ADX is crossing into positive territory and the StochRSI already is, which sets up the potential for the price to advance further. 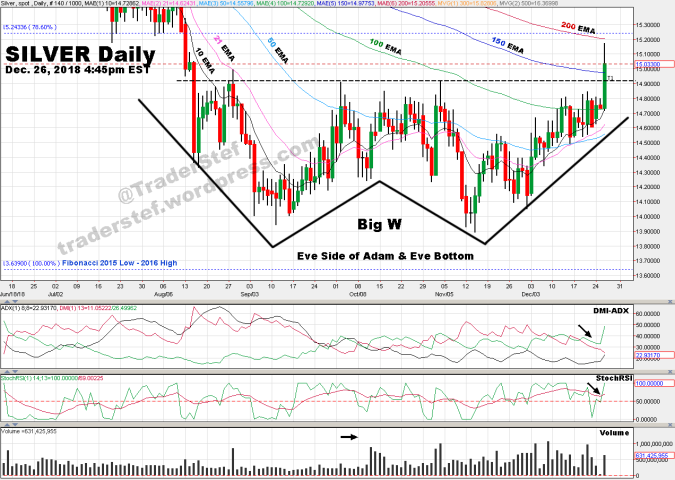 The Big W candlestick details are clearer on the daily. The lows in late July and the 200 EMA are responsible for stopping today’s price action in its tracks. The DMI-ADX turned positive with conviction and the StochRSI broke out to positive momentum. Note that the volume spikes in Big W’s second half coincide with price spikes. The daily is bullish near-term.