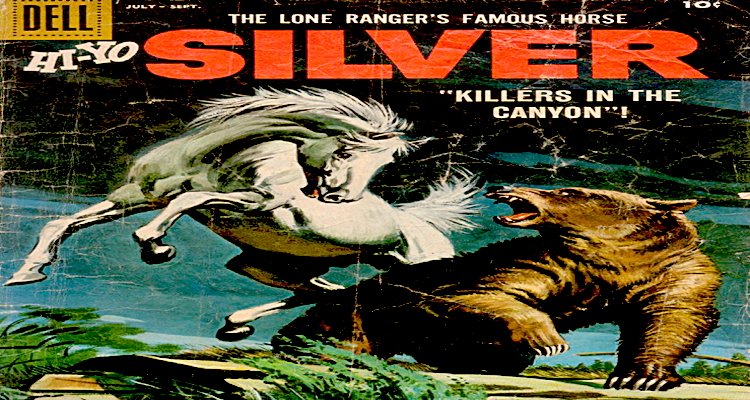 ‘The Story of Silver’ Review: The Other Precious Metal… “The value of silver—not to mention its legendary role in the world’s monetary affairs—is capable of driving some people crazy.” – WSJ, Feb. 20

Ted Butler’s Silver Newsletter – Icing on the Cake… “Unbeknownst to me when I wrote last week’s article, “A New Silver Issue for the Justice Department”, was the near simultaneous news that a leading silver mining company, Hochschild, had announced the closing of one of its Peruvian silver mines, Arcata, due to low silver prices.” – SilverSeek, Feb. 21

A repost of silver’s all-in cost of production (AISC) per ounce as of 3Q18, courtesy of SRSrocco Report. 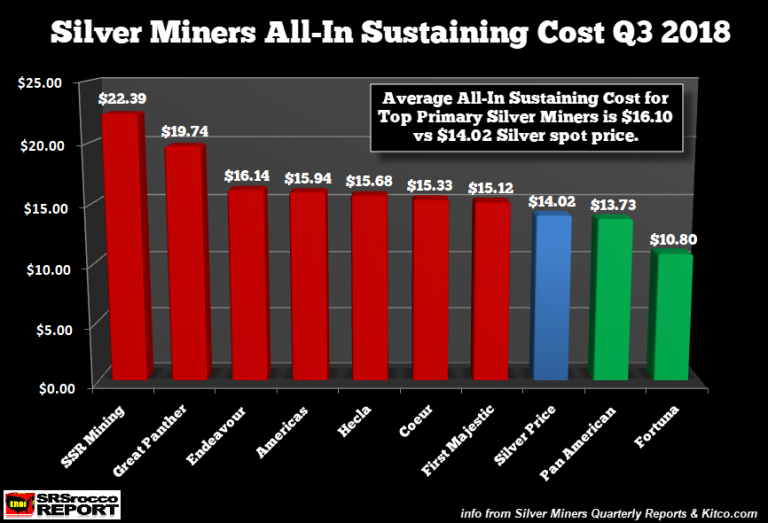 How Rare are Gold and Silver – More Gold Than Silver Above-ground… “From the crustal abundance of precious metals, we can also see that the gold-to-silver ratio in the earth’s crust is about 1:19. This means that there is roughly 19 times more silver than gold in the ground. However, the mining gold-to-silver ratio is about 1:9 – only 9 ounces of silver are mined for every one ounce of gold. The reality from mining is a stark difference from scientific estimates. According to the annual survey reports from Thomson Reuters, there are 71,578 tons of ‘identifiable above-ground’ silver stocks. Compare this to the 187,200 tons of above-ground gold stocks. There is actually lesser identifiable silver than gold above-ground.” – Silver Bullion, Apr. 2017 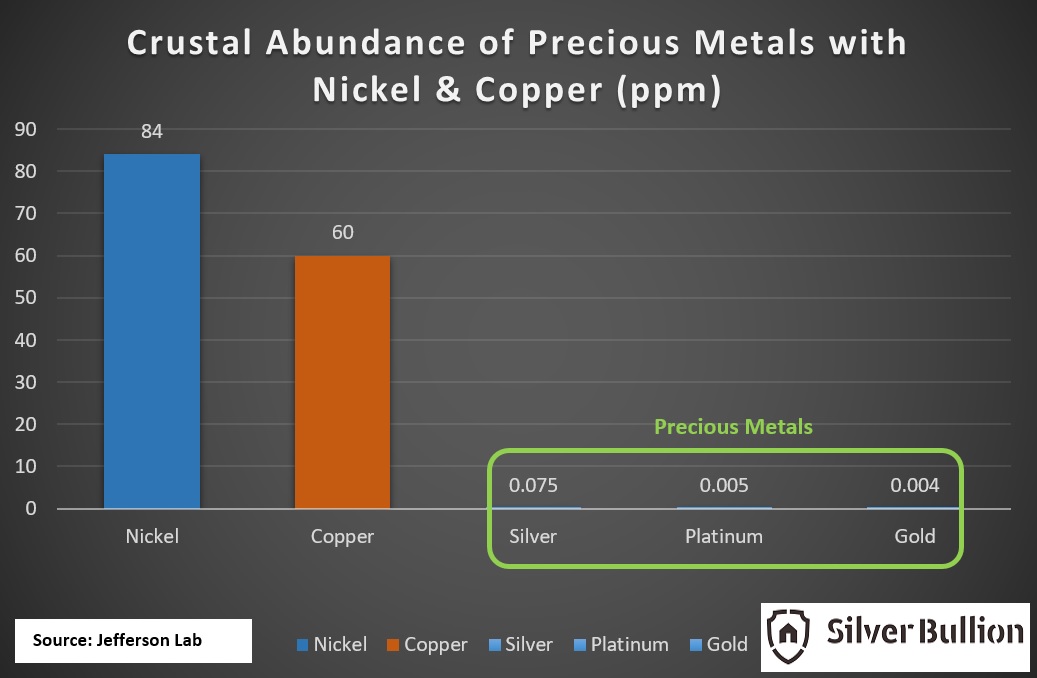 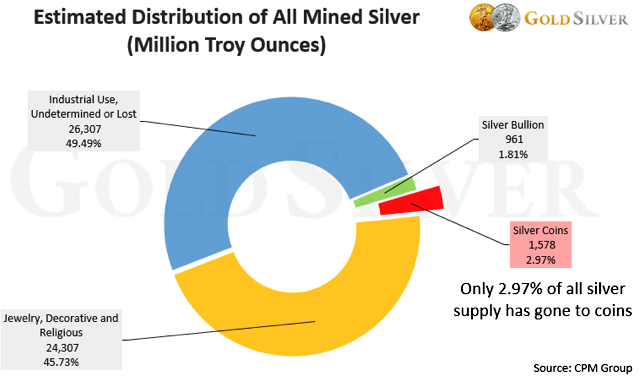 The numbers in this graphic are stale, but the proportionality remains the same. 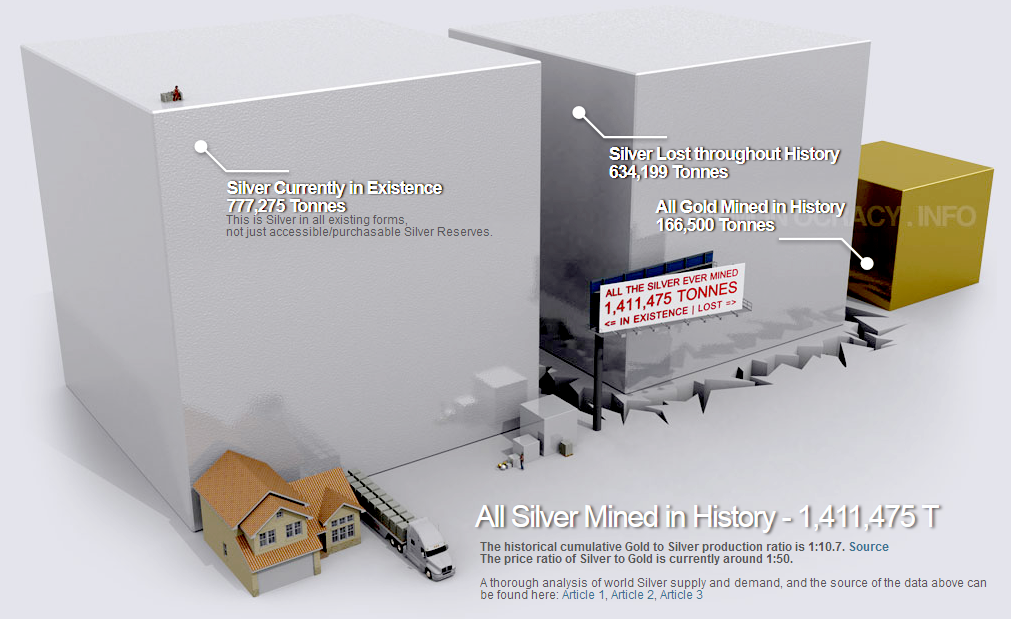 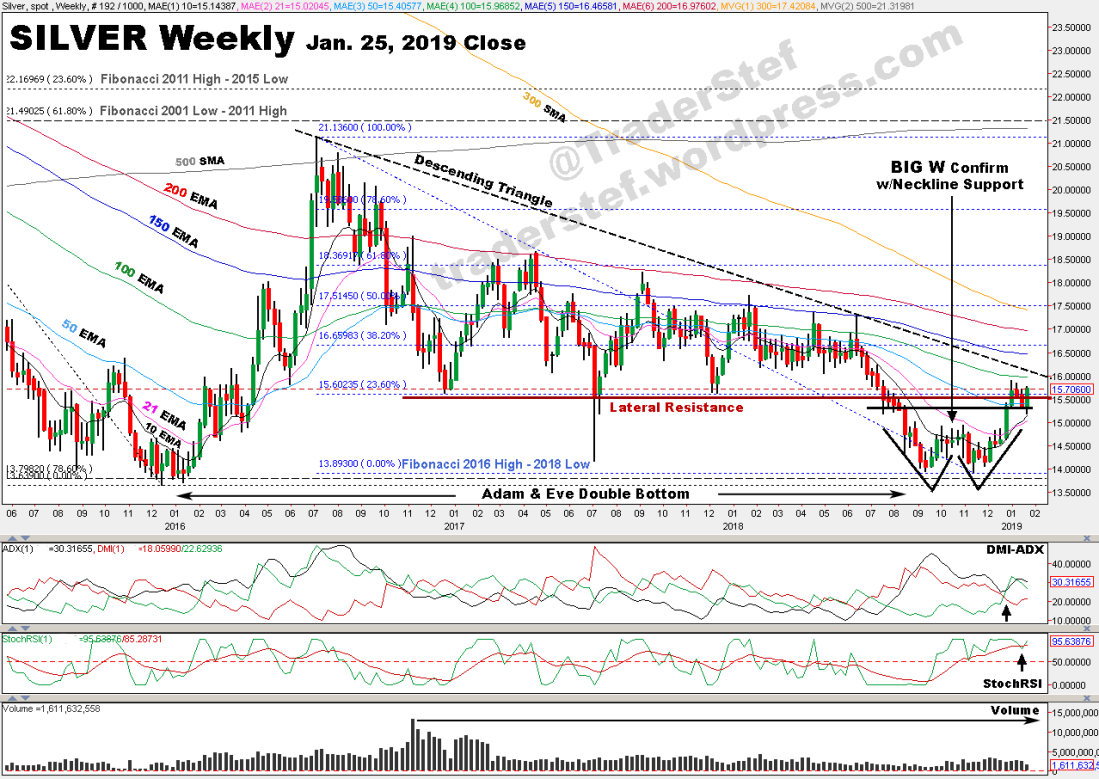 “After taking out the Big W neckline, the price chopped within a $0.77 range between the $15.87 high on Jan. 4 and the $15.10 low on Jan. 21 and 22 that retested the neckline and 50 Exponential Moving Average (EMA) for support. The price closed for the week at $15.70, just above the confluence of lateral resistance, the 23.6% Fibonacci level, and the Big W neckline, which bodes well to confirm the Big W pattern. The 100 EMA and trendline drawn down from the 2016 high is only a stone’s throw away. The DMI-ADX and StochRSI  remain in positive territory. The overall weekly volume is not impressive and raises concern as to if this rally has legs. As usual, gold will determine what silver does in the near-term. Let’s dissect the daily action.” 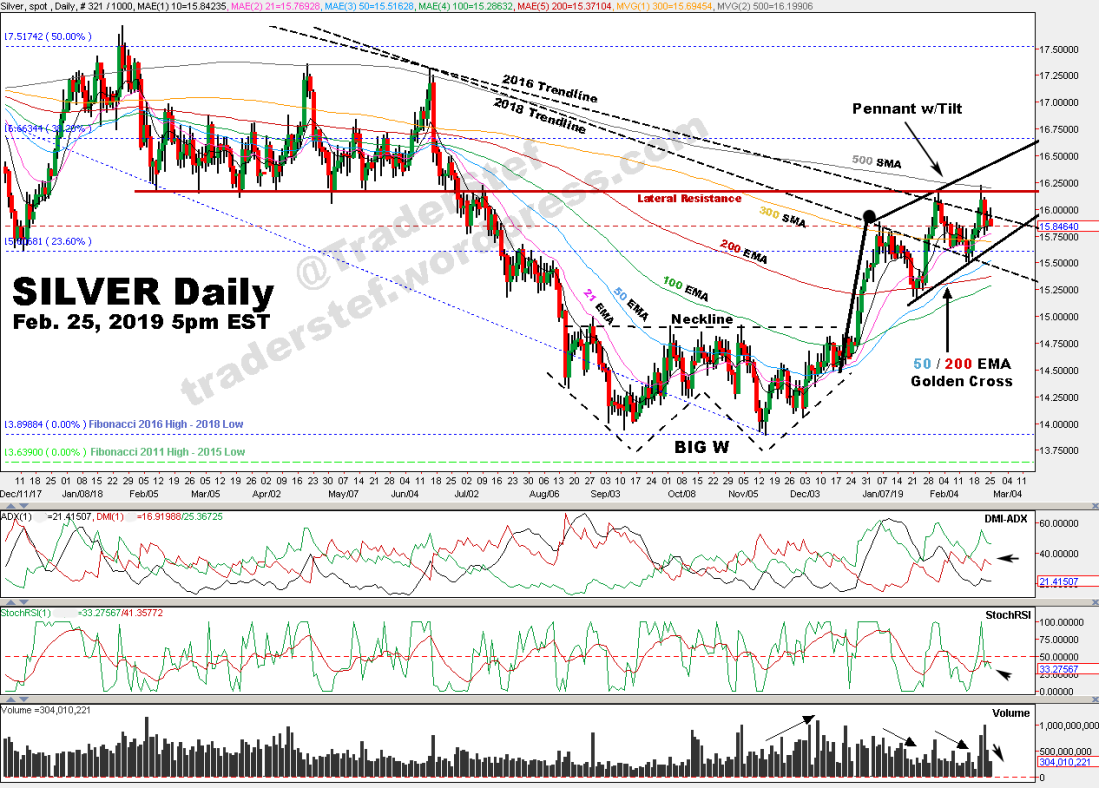 “If Friday’s rally confirms with a continuation throughout next week, the weekly chart will take on a more bullish tone. The daily highlights how the pullback played out to test the 200 EMA and Big W neckline for support after the initial breakout in late Dec. 2018. The 300 Simple Moving Average (SMA) and trendline drawn down from the 2018 high are the resistance that blunted Friday’s upside price spike. All EMAs are back below the price and the 50 and 200 EMAs are only $0.15 away from a bullish Golden Cross. The trendline drawn down from the 2016 high is sitting right at $16. If that trendline is breached with conviction, the next Fibonacci level at $16.65 is the first near-term target. Friday’s $0.46 rally kept the DMI-ADX in the positive momentum zone and spiked the StochRSI out of an oversold condition into a positive trend. The volumes were falling along with the price since Jan. 4, and Friday’s rally did not have an impressive reverse in volume to the upside. The volume must rise along with the price for a rally to be sustainable. I am optimistic about silver but not thrilled to see its price action so reliant upon gold’s whims. If $16 is taken out decisively on volume, a sweet spot momo play is certain. It is a “wait and see” situation.”

Since the Jan. 25 analysis, the trendline drawn down from the 2018 high, 300 SMA, red lateral resistance level, and 23.6% Fibonacci at $15.60 were taken out and retested, which resulted in a pivot higher. Just prior to the pivot, the 50/200 EMAs finally crossed to print a Golden Cross, as was noted to be nearing completion in the previous analysis. The price briefly rose beyond the trendline drawn down from the 2016 high and kissed the overhead 500 SMA. The red lateral resistance level is now slightly higher on the daily chart vs. the Jan. 25 weekly to parallel the two most recent highs and the lows printed through the price chop during the first half of 2018. The pullback in price from the 500 SMA is riding down the 2016 trendline and has not violated the remaining moving averages that are aligning with an upward tilt, which will provide support if further gains materialize.

A flagpole with a Pennant Tilt pattern has developed, which is not as bullish as a horizontal Pennant formation, but the positive is that it is tight and the moving averages remain below the price action. If the price fails to gain enough upside momentum to take out the 500 SMA, red lateral resistance, and subsequently challenge the $16.65 Fibonacci near-term target, but instead breaches the lower trendline, the Pennant Tilt would fail and it would have been a bearish Rising Wedge all along. Three weeks is the minimum duration for a Rising Wedge, otherwise it is a Pennant. The DMI-ADX remains in a positive momentum stance, but the ADX (black line) must rise up through the DMI (red line) and set up the Alligator Tongue look in order for the price to reach the next target. The StochRSI remains positive, but it’s hanging on to not breach further to the downside into negative momentum territory. The volume throughout the Pennant Tilt has fallen during price falls and risen during rallies in price, which is positive. Due to the Golden Cross, I remain near-term bullish, but with caution due to the substantial overhead resistance the price must overcome. Gold will ultimately determine its fate unless a news item appears that is strictly silver-bullish.

For all the trolls and stackers that are having a hard time with intraday price action, here is some blues music for your spirit.