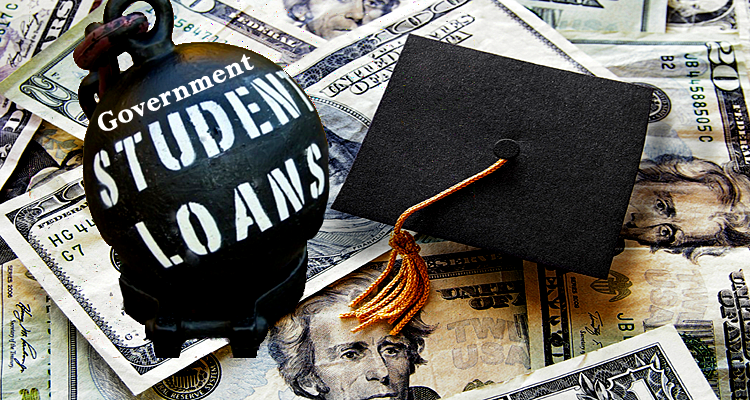 The student loan crisis has reached epic proportions, and it is only getting worse. The current herd of Socialist-leaning presidential candidates is pandering for votes from an indebted peasantry that signed on the dotted line to repay their student loan obligations. Senator Kamala Harris of California says we need a national priority and commitment to a Debt-Free College Act. Sen. Bernie Sanders of Vermont is waving a giant College for All Act carrot stick. Sen. Kirsten Gillibrand of New York is peddling the Public Service Loan Forgiveness (PSLF) program. Sen. Cory Booker of New Jersey suffers from delusions of Spartacus grandeur and is all over the map with a set of bullet points that read like an ADHD index card. Mayor Pete Buttigieg of Indiana stands for everything  from radical debt cancellation to states fully funding college as they do for public education. Former Vice President Joe Biden’s rhetoric about free college is desperately somewhere in the middle, with no definitive plan of action, but does include an apology. Sen. Elizabeth Warren of Massachusetts chimed in with the most audacious plan that calls for universal free public college and cancellation of student loan debt.

“We got into this crisis because state governments and the federal government decided that instead of treating higher education like our public school system — free and accessible to all Americans — they’d rather cut taxes for billionaires and giant corporations and offload the cost of higher education onto students and their families. The student debt crisis is the direct result of this failed experiment.” – Elizabeth Warren

Before throwing up your hands and saying that there is plenty of money to go around and the rich need to pay their fair share in our republic for which it stands, closely examine the excellent graphic from the OECD and Deutsche Bank, which breaks down the percentage of taxes paid by income class and country. Take special note of how much the upper- and middle-income classes in the U.S. pay in comparison to a few of the Socialist utopias around the world. 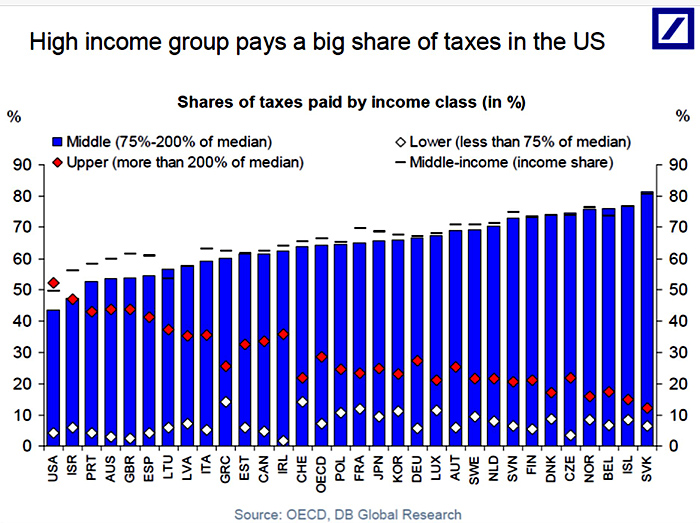 According to the latest data from the Federal Reserve, the total value of all student loans owned and securitized is quickly approaching $1.6 trillion.

Based on the Fed’s number above, the $333 billion figure for delinquent loans published by Bloomberg puts the delinquency rate at approximately 20%.

“Delinquent U.S. student loans reached a record $166 billion in 4Q18. But since delinquency rates for student loans are likely to understate effective delinquency rates by about half, according to the Federal Reserve Bank of New York, the figure is probably a far cry from reality. Factoring for understatement would imply that about $333 billion in student debt has not been serviced in at least three months. Putting this into perspective, $441 billion had been disbursed under the Treasury’s entire Troubled Asset Relief Program to provide financial stability during the recession.”

Here is the current breakdown of household debt by category and percentage from Bloomberg:

“America’s student loan debt crisis may be about to get much worse amid rising tuition and borrowing costs. Student loans are the only consumer debt segment with continuous cumulative growth since the Great Recession, with an almost 157% surge over the last 11-years. By comparison, auto loan debt has grown 52%, while mortgage and credit card debt actually fell by about 1%, according to Federal Reserve and Equifax data compiled by Bloomberg. All told, there’s a whopping $1.5+ trillion in student loans out there, marking the second largest household debt segment in the country, after mortgages.”

For many decades, a majority of student loans originated from the banking industry and private lenders. The Federal Government guaranteed those loans because the typical student did not have a broad or reliable credit history. The student loan market began as a small portion of the consumer finance market and grew exponentially as the cost of tuition and enrollments climbed. In the College Board’s Trends in College Pricing 2018 report, the average cost of tuition at a private non-profit four-year university is close to $36,000, which they claim is more than double the cost from the 1980s. From my personal experience, it is triple the price or more.

Despite the growing demand, the infrastructure remained the same until the great financial crisis multiplied issues that were inherent in the system. The banking industry faced a major credit crisis with a large amount of bad assets and derivatives on their balance sheets. The U.S. Government bailed out the TBTF conglomerates and banking industry at large and eventually nationalized the existing student loan industry. The $800 billion pile of student debt in 2010 became the sole responsibility of the government to manage and was allowed to continue on its meteoric rise to the $1.6 trillion behemoth it is today. As of Feb. 2019, at least 20% of student loan debt is 90 days or more delinquent or in default.

The government backstop allowed the pool of student debt to soar exponentially. Easy money that flowed into the college industry lured college administrators to spend more to attract more students and subsequently increase the cost of tuition. The participation in a belief that a college degree is a right instead of a choice enabled everyone to participate in a bubble-blowing party that mirrors the insanity of the housing bubble debacle. A college education is a righteous pursuit when done for all the right reasons and you understand that you are responsible for the bill in the end. Unfortunately, we now have a large pool of graduates that believe college was not worth it.

If the Democratic Socialists take over the House, Senate, White House, and pass some type of debt-free college act after the 2020 elections, will people who earned a higher education and paid off the bill get reimbursed, too? If you spent 15 to 20 years of your life paying off a college loan and they turn around and make it free for the next guy or gal, will you be okay with that? Should people who choose or choose not to attend college be forced to subsidize those who do? Any version of a free college degree that increases the earning power over those who do not earn a college education will definitely upset a large segment of the population.

What about me? I took out student loans and refinanced them in order to afford the payments, which took 15 years of labor to pay off. Will the forgiveness of student debt be retroactive, and how far back? Oh yes, I am already pissed, and the Socialist party has not taken over yet.

Watch our new House Financial Services Committee Chair Maxine Waters be schooled by the TBTF CEOs on student loan origination. She had no idea that the government took over the student loan industry back in 2010.