The price action in silver was lukewarm during the first half of the year, but the chart looks promising as gold led the way since June and lifted silver above the average All-In Sustaining Costs (AISC) of production and closer to the significant $21.49 Fibonacci level. I will dive right into the charts this evening and follow up with a few articles, fundamental data points, and noteworthy interviews. Here are the links to my previous analyses on silver:

Here is the silver spot weekly chart as of Aug. 26, overlaid with the CFTC’s Commitments of Traders (CoT) report data from Aug. 20 and released on Aug. 23. The CoT is always delayed by one week. The Aug. 27 CoT data covering the previous week’s price action will be released on Friday, Aug. 30. To view a larger version of any chart, right-click on it and choose your “view image” option.

The purpose of the overlay is to help identify the near-term price trend based on positioning by the commercials (bullion banks) and large specs (hedge funds). Almost without exception, the commercial (bullion banks) traders build short positions during a rising price trend and large specs (hedge funds) add long positions to capture the momo play. When the price is approaching an inflection point, their positioning begins to flip. It appears that silver is very close to a shift in price where it can take a breather and consolidate until another leg up. Zoom in to the bottom of the chart and note the Aug. 20 data points marked with red dots. I included the 50 & 200 Exponential Moving Averages (EMA) for reference.

Notice the flip in long vs. short positioning by the commercials and large specs, indicated by horizontal lines without arrows on the lower half of the chart. It is a rare occurrence that commercials go net long with the large specs net short. That scenario may signal a significant reversal in the price trend to the upside in the near future. The same scenario played out with gold in 4Q18 and is referenced in “Price Derangement Syndrome Fuels Gold Pundit Insanity – Part 2, published on Mar. 12, 2019.

Below is the silver futures chart overlaid with the CoT. The commercials have not been net long silver with large specs net short in at least 20 years. Take note of the big blue arrow. That is where the commercials flipped to net long and was the first tap of a Double Bottom at the base of a Big W pattern (see the silver charts below). It happened again on the second tap, but the number was insignificant in comparison. 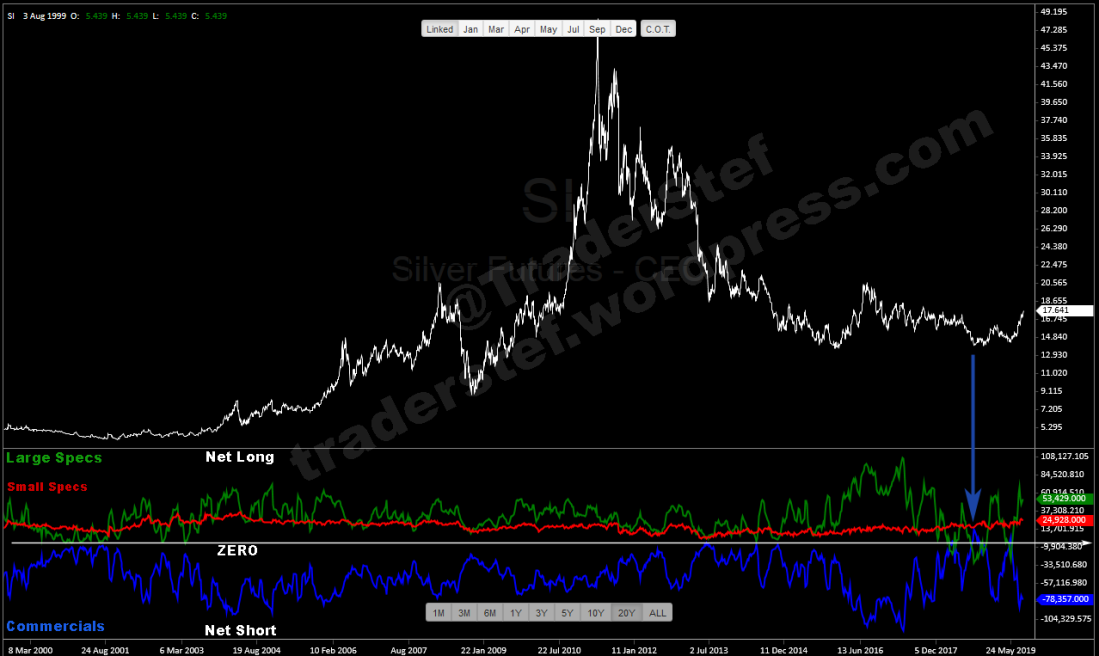 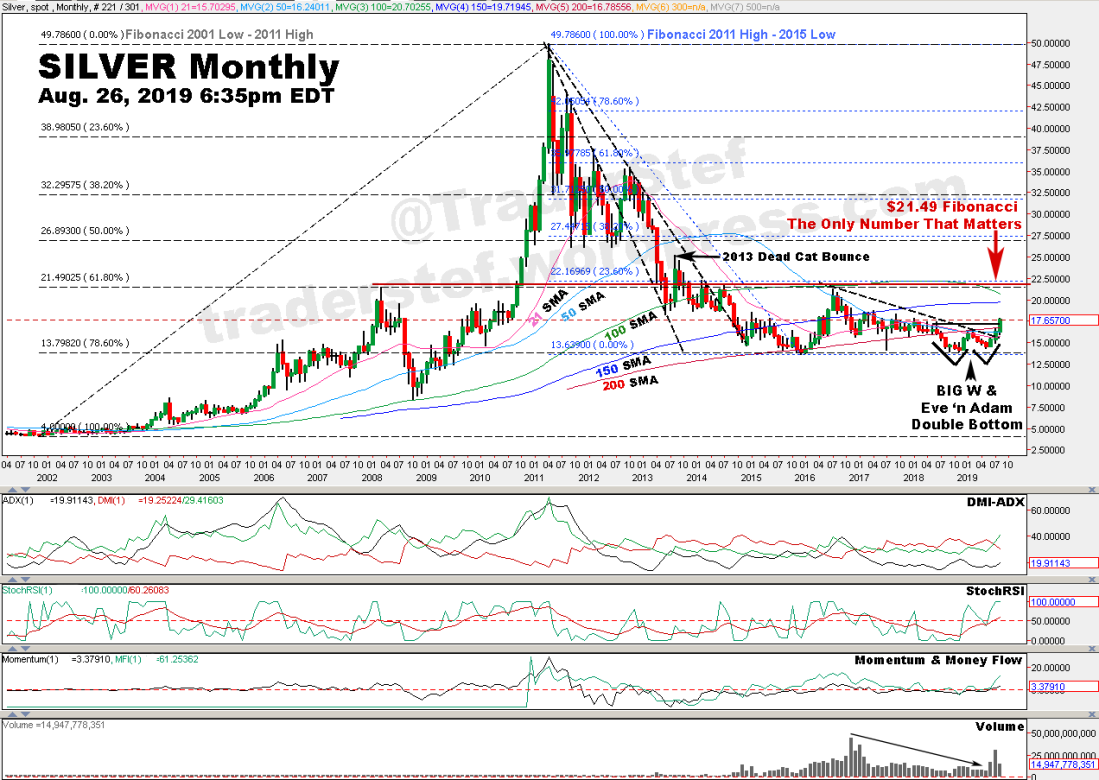 As the price rallied to the twin peaks lateral, it decisively broke above the 21, 50, and 200 SMA, as well as the trendline drawn down from the 2016 high. If the 150 and 100 SMA are taken out, the price has a shot at clearing the $21.49 Fibonacci level. Not shown on the chart are Exponential Moving Averages (EMA) and all of them are below the price action. The DMI-ADX is positive but indecisive, the StochRSI has peaked, the Momentum and Money Flow are beginning to turn upwards, and Volumes have improved but with the August bar lagging and less than a week to go for a final print.

If $21.49 is breached with conviction in price and Volume, the next resistance is $25, which is the high off the 2013 Dead Cat Bounce. If successful in taking out $25, the next target would be the $26.89 Fibonacci. I am bullish long-term but remain cautious in the near-term until $21.49 is decisively left in the dust. 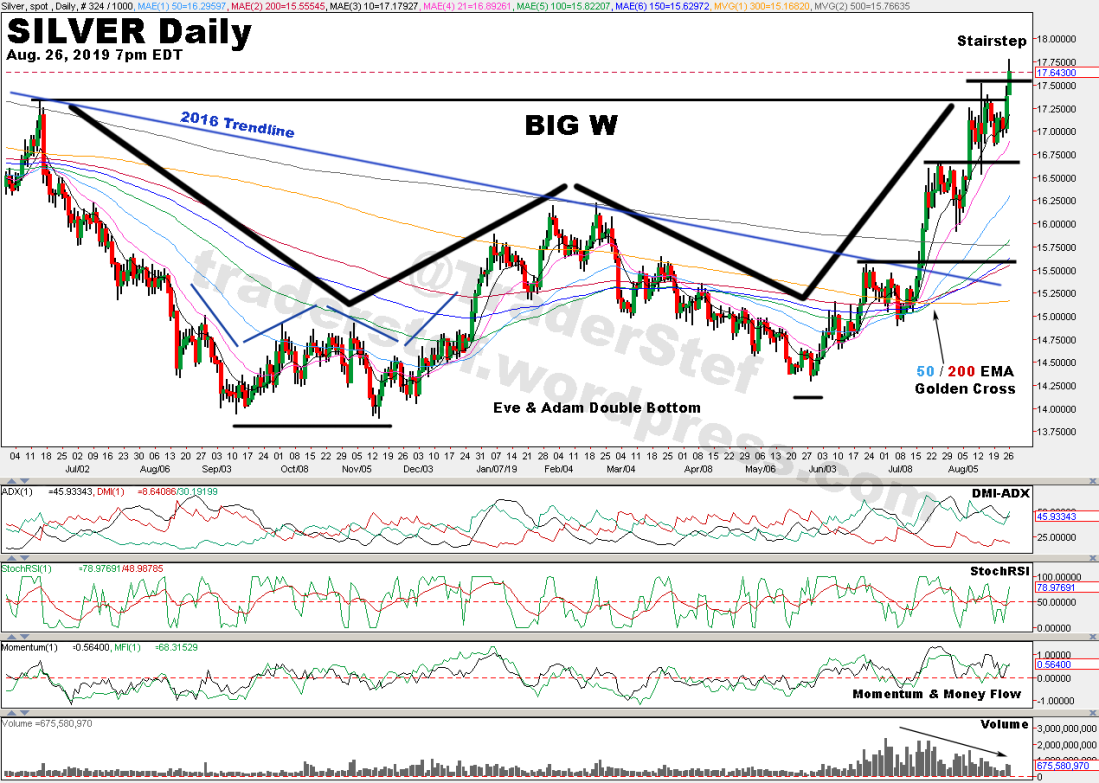 “The volume must rise along with the price for a rally to be sustainable. I am optimistic about silver but not thrilled to see its price action so reliant upon gold’s whims. If $16 is taken out decisively on volume, a sweet spot momo play is certain. It is a ‘wait and see’ situation.”

“The price briefly rose beyond the trendline drawn down from the 2016 high… and has not violated the remaining moving averages that are aligning with an upward tilt, which will provide support if further gains materialize.. The DMI-ADX remains in a positive momentum stance, but the ADX (black line) must rise up through the DMI (red line) and set up the Alligator Tongue look in order for the price to reach the next target. The StochRSI remains positive, but it’s hanging on to not breach further to the downside into negative momentum territory… I remain near-term bullish, but with caution due to the substantial overhead resistance the price must overcome. Gold will ultimately determine its fate.”

The daily chart is a close-up of the Eve & Adam Double Bottom and Big W pattern with a price break above the twin peaks. The 50/200 EMA Golden Cross has reasserted itself after failing the first attempt in February.  All of the EMAs have realigned into a bullish setup. The DMI-ADX remains positive and the StochRSI is rising without reaching an overbought level. The Momentum and Money Flow are somewhat stagnant and the Volumes have been falling throughout the price rally since June. The divergence between a rising price and falling Volume is not a good sign in the near-term, despite the bullish stair stepping pattern. As noted on the monthly chart analysis, I remain bullish long-term but cautious in the near-term. The odds are high for a pullback and consolidation before a test of $21.49 can take place. 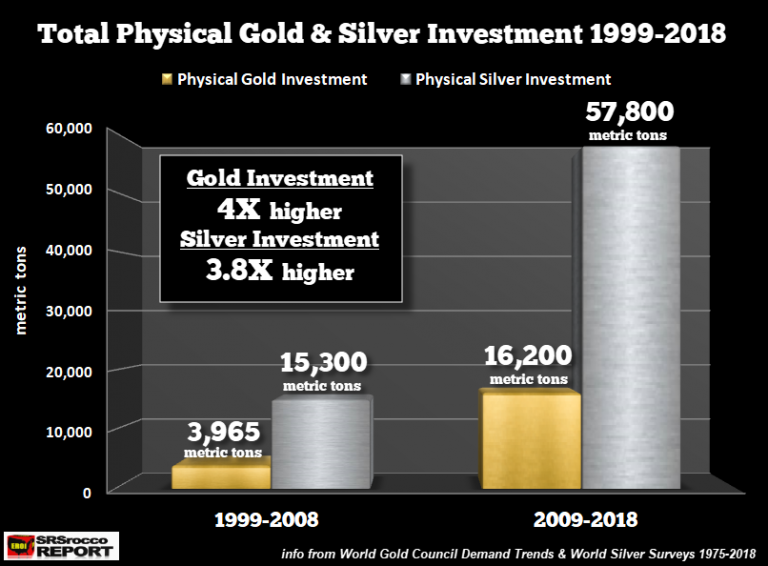 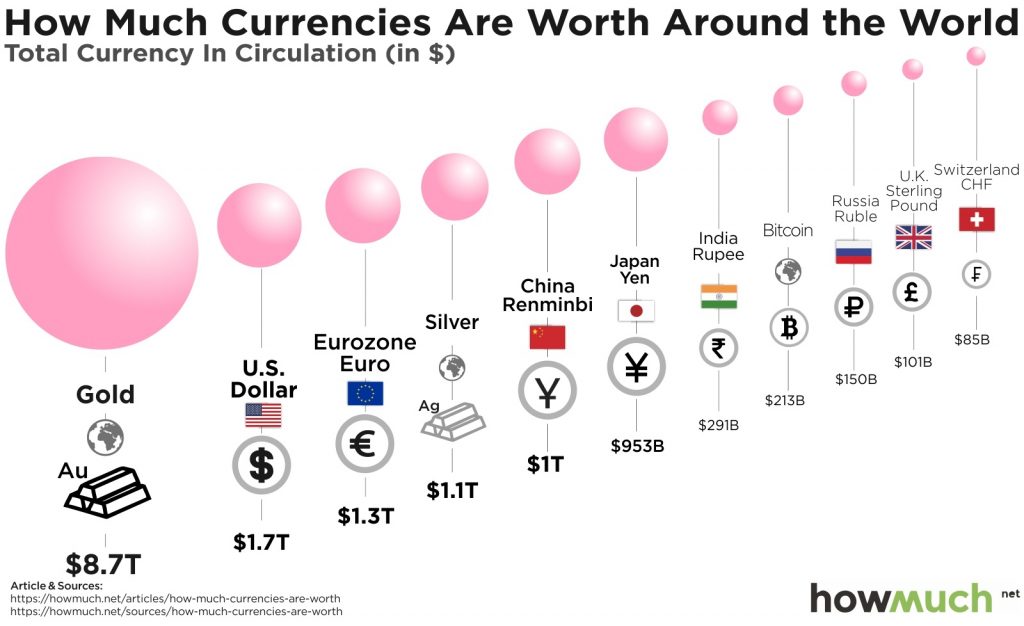 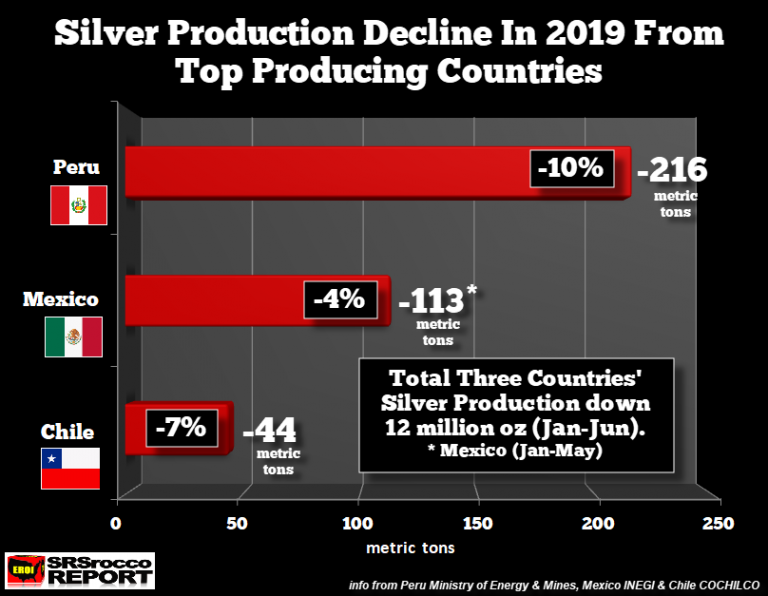 Keith Neumeyer: Big Institutional Money is Moving Back into Silver