If you missed my recent analyses on the price advance of silver, I suggest you review “Silver Still Needs a Few Dollars More for a Breakout,” published on Aug. 26, and “Savvies Were Aware of the Near-Term Risk for a Pullback in Gold and Silver,” published on Sep. 7.

The seasonality pattern for gold has been spot on and silver has been off by a week or so.

Here is the silver spot weekly chart as of Monday Sep. 30 at 5pm EDT, overlaid with the CFTC’s Commitments of Traders (CoT) report data from Sep. 24 released on Set. 27. The CoT is always delayed by one week. The Oct. 1 CoT data covering the previous week’s price action will be released on Friday, Oct. 4. To view a larger version of any chart, right-click on it and choose your “view image” option. 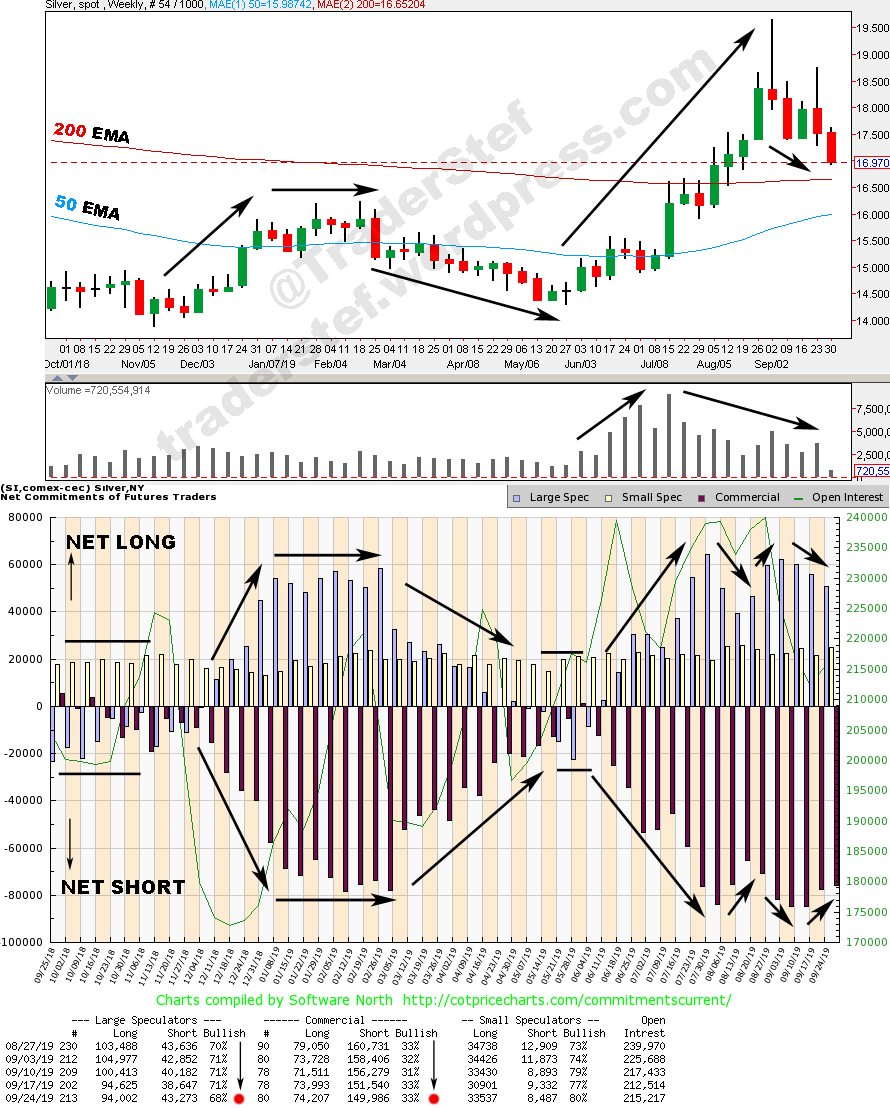 The purpose of the overlay is to help identify the near-term price trend based on positioning by the commercials (bullion banks) and large specs (hedge funds). Almost without exception, the commercial traders build short positions during a rising price trend and large specs add long positions to capture the momo play. When the price is approaching an inflection point, their positioning begins to flip. Zoom in to the bottom of the chart and note the Sep. 24 data points marked with red dots. The large specs unloaded a chunk of theirs longs to where their bullish stance fell by 3%, whereas the commercials remained steady. That tells you where the majority of the current price decline is originating from, as large specs have gotten nervous about the near-term technical outlook. This Friday’s CoT data release will add more color to the dynamics taking place. I included the 50 & 200 Exponential Moving Averages (EMA) for reference.

Notice the flip in long vs. short positioning by the commercials and large specs, indicated by horizontal lines without arrows on the lower half of the chart and briefly in the center. It is a rare occurrence that commercials go net long with the large specs net short. That scenario can signal a significant reversal in the price trend to the upside, and the silver price has had a significant rally. The same scenario played out with gold in 4Q18 and is referenced in “Price Derangement Syndrome Fuels Gold Pundit Insanity – Part 2, published on Mar. 12, 2019.

An article published on Forbes today has taken note of the lack of retail level investor participation in the gold rally, as it is primarily institutional smart money pulling the strings during this primary bull phase, and accumulating for the restart of the secular bull. Silver appears to be in the same boat.

UBS Doubles Down On Gold… “‘An environment of negative and lower-for-longer real rates, slowing growth with downside risks, and elevated uncertainty strengthens the case for holding strategic gold allocations’… The other bullish blessing is that most of the investor love for the metal has not come from individual investors. Individuals are well-known for buying and selling assets of any kind at precisely the wrong time. That means that their relative absence from gold investing is a good thing for investors who want to see the price of bullion rally.” – Forbes, Sep. 30

With those quotes in mind, consider the data on silver bullion coin sales at the U.S. Mint. Here are the gold and silver sales numbers in a side-by-side comparison that includes 2018 and 2019 as of today.

I compiled twenty years of sales data on silver from the U.S. Mint to gain a glimpse into retail behavior, and included a few low and high price points from the silver spot chart. Retail participation in the current primary bull (accumulation phase) is pathetic, and that may be a good sign that silver is still in the early stages of a sustainable rally. Just like gold, institutional money is cashing in on the momo play opportunities and building core positions. My focus remains on the $21.49 Fibonacci, which is the breakout level in 2010 that launched a rocket shot to the 2011 high, and is now a topside resistance level ever since the first Dead Cat Bounce that followed the 2013 plunge in price.

Excerpt from the Aug. 26 monthly and daily chart analysis:

“I am bullish long-term but remain cautious in the near-term until $21.49 is decisively left in the dust.”

“The daily chart is a close-up of the Eve & Adam Double Bottom and Big W pattern with a price break above the twin peaks. All of the Exponential Moving Average (EMAs) have realigned into a bullish setup. The DMI-ADX remains positive and the StochRSI  is rising without reaching an overbought level. The Momentum and Money Flow are somewhat stagnant and the Volumes have been falling throughout the price rally since June. The divergence between a rising price and falling Volume is not a good sign in the near-term, despite the bullish stair stepping pattern. As noted on the monthly chart analysis, I remain bullish long-term but cautious in the near-term. The odds are high for a pullback and consolidation before a test of $21.49 can take place.”

“On Aug. 26, I warned that the odds were high for a pullback and consolidation before the $21.49 Fibonacci could take place. Since the $14.29 low in late May 2019, the price action added a respectful $5.35 (+37.5%) and printed a high of $19.64. The price got way ahead of itself due to a parabolic $1 RYPO move through the topside trendline of the Up Channel. On Friday, silver printed a low of $17.96 and closed at $18.16… The next level of substantial support is the $17.50 area, where a stair step occurred near the topside lateral of the Big W pattern… no serious technical damage has occurred yet, and the uptrend remains intact. However, if the 50 EMA is breached to the downside with conviction, the next level of support is the $16.50 area at the next stair step. This pullback in price can be an opportunity to add physical and/or paper trading positions after a decisive upside pivot occurs.”

The Plunger candlestick (aka Shooting Star) from the first week of September was definitely a confirmation that a pullback was imminent. Silver printed a high of $19.64 on Sep. 4, and today’s low was $16.92. The majority of downside price action since the $19.64 high occurred stateside, but always began in Asia and Europe. Today was the first day that the price action spread equally through all markets, but note that China is celebrating National Day and their markets are closed until next week.

The pattern dominating the current breather in price is a Falling Wedge. The Volume on the daily chart is not showing a significant rise along with the fall in price, but we cannot be sure what the weekly will print until Friday’s close. The 50 EMA and Simple Moving Average (SMA) were violated to the downside on the daily chart today, but are not violated on the monthly and weekly chart. It appears that my concern over a 50 EMA breach on the daily is materializing into a potential $16.50 print.

There is a confluence of support on the weekly at the $16.50 level, which includes the 21 and 200 EMA, 300 SMA, the second stair step, and a lower trendline drawn up from the June low. The DMI-ADX remains in positive territory and is technically not overbought, the StochRSI is rolling over and will base out, and the Money Flow and Momentum are beginning to roll over. The positive on the chart is that Volume is not growing along with the fall in price. I remain bullish long-term, but remain cautious until $21.49 is taken out with conviction. In the meantime, there will be numerous trading opportunities. The $16.50 area may be the sweet spot pivot where layering core positions and purchasing coin is in the cards.

A positive trend making a comeback on the retail side is dumpster diving at your local bank for junk silver freebies.