One of the most brutally honest mainstream media interviews is the following CNBC Squawk Box clip out of Europe from last Monday, which ranks second next to Jim Cramer’s 2007 meltdown during the run-up to the Great Financial Crisis. Yes, Peter TooGood is his real name, and taking the 2007 phrase “until the music stops” from the former CEO of Citibank, Chuck Prince, is too good to be true, but it is true! 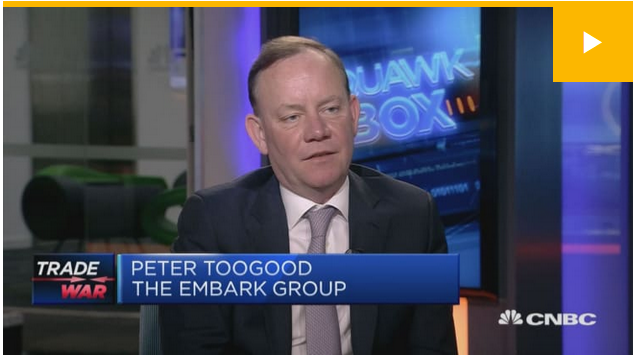 The price of gold and silver have consolidated over the past few months. At times, they dropped a bit and then leveled off, then rinsed and repeated along with stock market whiplash due to China trade war headlines. Despite a shallow 7% pullback in price since September, gold remains on track for its largest annual climb in many years. Silver has tagged along for the ride since its 2015 low but has not kept up with gold’s stellar performance in 2019.

Gold and silver have had a mirrored breather within a Falling Wedge and appear to be poised for a break to the upside that will run deep into 2020. There is seasonality precedent for upward pivots during the holiday season, with an average price gain of 15%. Silver tends to be more volatile on the chart than gold, so my focus will remain with gold until silver catches a bid and destroys the overhead $21.49 Fibonacci level.

I have never stepped into the ring with a price prediction for an upcoming year, but this year seems different no matter how you slice and dice the domestic, geopolitical, and monetary policy variables at play. By sticking with a 15% precedent, that puts gold in the $1,700 range in 2020. There is room for a surprise gain to approach gold’s all-time high or better, but I will not speculate on that at this time.

The catalysts for a rise in price are the continuation of low savings yields, negative interest rates, a bubbly stock market, very accommodative monetary policy by central banks, precarious domestic politics and geopolitical risks, and a continuation of safe haven accumulation of gold by the wealthy and central banks.

If you were fortunate enough to have witnessed the intraday price action in the FOREX spot market during gold’s multi-year run-up to its Sep. 2011 $1,920.74 high and silver’s Apr. 2011 $49.78 high, you understand how quickly the winds of change can take hold.

Here are links to my recent analyses on gold and silver. To view a larger version of any chart, right-click on it and choose your “view image” option. 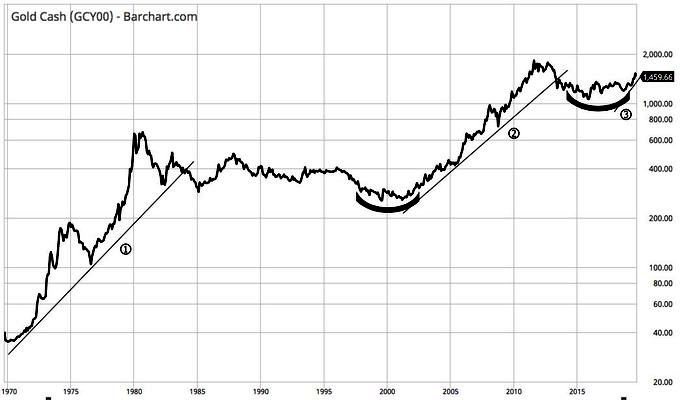 “The 21 Exponential Moving Average (EMA) is now acting as support… several lateral support levels with substantial buy volumes in the previous Flag Tilt pattern will provide support between $1,430 and $1,450.”

“The choppy price action and pivot off $1,446 morphed the Half Staff Flag into a Falling Wedge pattern… keep eyes on $1,500 for upside momentum, and beware of the China trade war headlines because the mindless machines buy and sell without a conscious.”

“Over the past four weeks, the price has closed on or around the 21 EMA and $1,463 Fibonacci. The high buy Volumes… most especially at the end of the Flag Tilt pattern, are where the current price action found additional support. Despite the pullback since September, no serious technical damage has taken place and the 50 EMA remains well below Friday’s close. At the worst-case scenario of $1,400, even then, the uptrend would remain intact. The DMI-ADX and StochRSI are in oversold territory and the Volumes continue to trend downwards as the Falling Wedge is well into its extension. The negative on the chart is that Momentum and Money Flow have not yet turned upward. I remain bullish long-term but neutral near-term… This environment is ripe for scalping momo plays until a breach of $1,500 and $1,526 entices large position builders to finance a run-up to the $1,586 Fibonacci.

The continued increase of Open Interest and positioning by traders within the CFTC’s Commitments of Traders report data has had no significant effect on the price action in gold for nearly four months.

After pivoting off the Falling Wedge’s lower trendline on Nov. 12, the gold price has risen steadily with higher lows and higher highs, and an Up Channel is clearly visible when viewing the details in a daily chart. The $1,446 low found support from large buy volumes that occurred during the August breakout from the previous Flag Tilt pattern. The price closed this week slightly below the topside trendline of the Falling Wedge and $1,483 Fibonacci level, and closed above the 10 EMA during the last two trading sessions for the first time since the week of Nov. 4. On the daily chart, the price closed back above the 50 EMA during the last three trading sessions for the first time since Nov. 4.

Volumes have continued to fall along with price during this pullback and consolidation, which increases odds that the Falling Wedge has reached its bottom. The Momentum and Money Flow have pivoted upwards for the first time since the Flag Tilt, and the StochRSI appears ready to break away to the upside. The ADX has poked its head back under the DMIs that remain flat and in a positive trend, which sets up the preferred dynamic for an Alligator Tongue pattern if the price breaks out on decisive Volume. If buy Volume picks up as we approach Christmas and the New Year, there is a good chance the price will break away from the Falling Wedge and challenge $1,500 and the $1,526 Fibonacci level as we ring in the New Year. 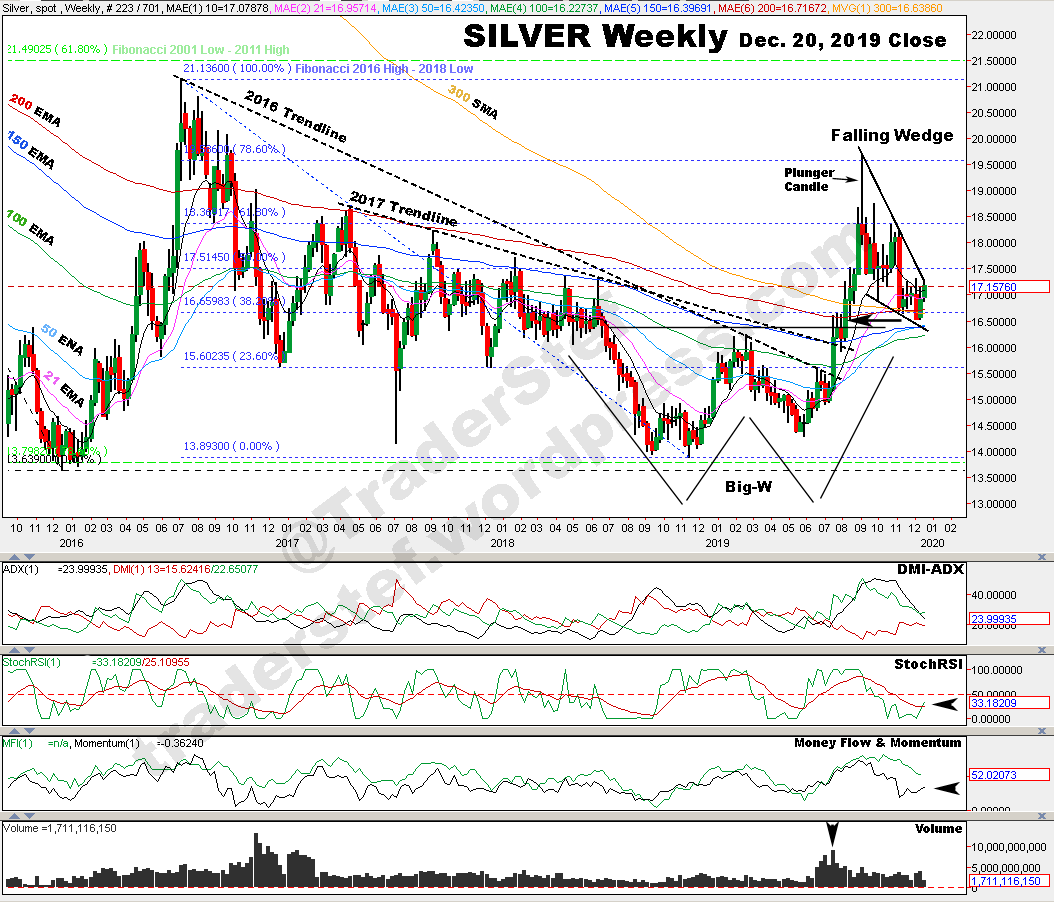 “Volumes have been falling throughout the price rally since June. The divergence is not a good sign in the near-term… odds are high for a pullback and consolidation before a test of $21.49 can take place.”

Excerpt from the Sep. 30 daily and weekly chart analysis:

“The pattern dominating the breather in price is a Falling Wedge. Volume on the daily chart is not showing a significant rise along with the fall in price… The 50 EMA and Simple Moving Average (SMA) were violated to the downside on the daily chart today but are not violated on the monthly and weekly chart… The positive on the chart is that Volume is not growing along with the fall in price… $16.50 area may be the sweet spot pivot where layering core positions and purchasing coin is in the cards.”

“After the $14.29 low in late May, the price action added a respectful $5.35 (+37.5%), with a $19.64 high on Sep. 4. The Plunger candlestick (aka Shooting Star) on the weekly chart for the first week of September telegraphed a pullback… There is a confluence of support on the weekly at the $16.50 Fibonacci level, which includes the 21 and 200 EMAs, 300 SMA, and the second stair step off the low in May… an extra emphasis must be placed on due diligence in pattern and candlestick confirmations before risking capital. The long-term outlook remains bullish.”

The continued decrease of Open Interest within the CFTC’s Commitments of Traders report data on silver has had no significant effect on the price action for nearly four months, but the largest swing in short vs. long positions has taken place in the small speculator category vs. large speculators and commercials. The small specs are very confused about the price action, while the large specs and commercials continue to play the opposite side of the trade against each other as usual.

The confluence of the $16.65 Fibonacci, Big W rim line, large buy volume during July and August, and the 200 EMA and 300 SMA provided support at the $16.50 low in early December. The price has pivoted back to the topside trendline of the Falling Wedge and closed back above all the moving averages for the first time since mid-October. The StochRSI peeked its head out into positive territory, and the Momentum indicator has turned upward. The DMI-ADX remains positive but is not set up for the preferred dynamic you want to see for an Alligator Tongue. The Money Flow indicator has not turned upward, and Volumes have no rhyme or reason in relation to price. As usual, big brother gold will determine silver’s near-term timing.

Here are a few articles to peruse before closing up shop tonight:

Cornelius, Rudolf, and Frosty the Snowman – Silver and Gold

One thought on “Silver and Gold in 2020 – Technical Analysis”