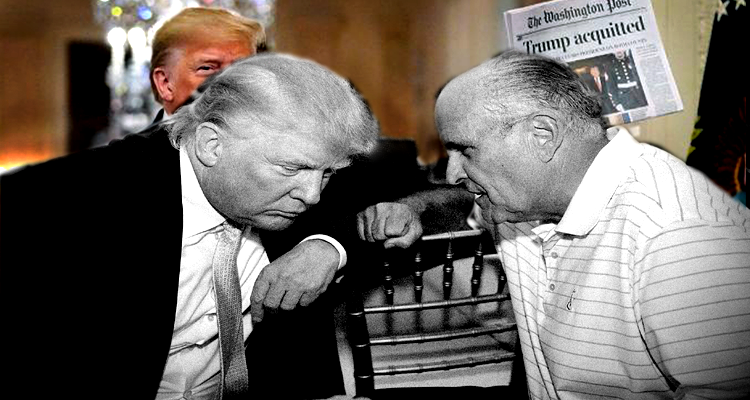 “Sedition is overt conduct, such as speech and organization that tends toward insurrection against the established order. Sedition often includes subversion of a constitution and incitement of discontent towards, or resistance against established authority… For a seditious conspiracy charge to be effected, a crime need only be planned, it need not be actually attempted.”

If you have not followed Rudy Giuliani’s investigation surrounding Ukrainian corruption, the Bidens, a Deep State bureaucratic coup, the impeachment hoax and acquittal of the POTUS, and the Horowitz report, below is the first installment of four (2,3,4) exclusive investigative reports produced by One America News (OAN). Before starting the first installment, here is a reminder of how a politician admits to quid pro quo in a public forum.

Rudy is well-known for numerous accomplishments, and one that he reminds everyone of on occasion is his role in establishing RICO laws and the subsequent template for prosecuting organized crime.

“Those explosive — and arresting — hearings led to the 1970 passage of the Racketeer Influenced and Corrupt Organizations Act, better known as RICO, a law designed to allow prosecutors to go after enterprises that engaged in extended, organized criminality. RICO laid out certain “predicates” crimes — those that prosecutors could use to stitch together evidence of a corrupt organization and then go after everyone involved in the organization as part of an organized conspiracy. While the headline-grabbing RICO predicates were violent crimes like murder, kidnapping, arson and robbery, the statute also focused on crimes like fraud, obstruction of justice, money laundering and even aiding or abetting illegal immigration. It took prosecutors a while to figure out how to use RICO effectively, but by the mid-1980s, federal investigators in the Southern District of New York were hitting their stride under none other than the crusading United States attorney Rudy Giuliani, who as the head of the Southern District brought charges in 1985 against the heads of the city’s five dominant Mafia families.” – NYT, Mar. 2019

There is much speculation about the potential for Rudy’s research going back as far as 2011 evolving into a criminal investigation. That speculation was put to rest today.

Giuliani giving Ukraine information to Justice Department, Barr says… “Attorney General William Barr acknowledged for the first time Monday that President Donald Trump’s personal lawyer, Rudy Giuliani, has been giving the Justice Department information he collected in Ukraine, essentially bringing what was a stealth campaign into official government channels. Barr said, however, that information coming from Ukraine must be carefully vetted to ensure it is accurate and authentic.” – Bloomberg, Feb. 10

“Sen. Lindsey Graham says he talked to AG Barr this morning and they have set up a ‘process’ by which Rudy Giuliani will now send his Biden ‘dirt’ directly to AG Barr.” — Josh Marshall, Feb. 9

As a former New Yorker who lived under Rudy’s mayorship, I can assure you that when he says something will be done, it will be done, and any investigation would be conducted in a meticulous fashion with convictions following. If you take the time to watch all four pieces of investigative journalism produced by OAN, you will realize the weight of the evidence collected vs. any propaganda tossed around by political pundits that attack the credibility of anyone associated with the POTUS.

Rudy was interviewed by Jesse Watters and he shared a few thoughts about witnesses, a multimillion-dollar money laundering trail, and evidentiary documents to substantiate his conclusions. He also emphasized the three Ukrainian witnesses who were present at a National Security Council meeting in Jan. 2016 during the Obama administration, of which two Joe Biden representatives asked them to “dig up dirt” on the Trump campaign. One of them may be the (impeachment) whistleblower.

“What I used to call when I was U.S. attorney, the smoking gun… we’ve got the documents… this is a money laundering transaction… it’s about $14.6 million… it’s a notice from the Latvian government to the Ukrainian government that Hunter Biden is under investigation for corruption… I’ll simplify it. $14.8 million goes from Ukraine to a company in Latvia, disguised as a loan… then it goes from Latvia to another company disguised as another loan, in Cyprus. And then it goes to the U.S. where we lose track of it because when [former Ukraine prosecutor Viktor] Shokin gets it, just about the day he’s fired…” – USSA News, Feb. 9

The Democratic-controlled House failed to impeach the POTUS by alleging abuse of power and obstruction of Congress, all based on quid pro quo hearsay over security assistance for Ukraine from a documented phone conversation with the newly-elected Ukrainian president. Ironically, legal action may be levied upon the previous administration and its cohorts that spied on Trump’s 2016 presidential campaign and relished in every attempt over three years to remove him from office.

Given the mainstream media coverage and narrative about Rudy and Ukraine and how it was muddled in with the impeachment proceedings, you might assume he traveled to Ukraine on a covert operation at the direction of the POTUS. The last time Rudy traveled to Ukraine was in Dec. 2017, which was an independent security mission for the city of Kharkiv, which was unrelated to the Bidens and prior to his role as personal attorney to the POTUS. He did not travel to Ukraine until OAN began the production of their investigative piece in late 2019 and they flew him there for the collection of evidence and witness testimony.

The reason Rudy began the investigation is because it was “put in my lap” in  2018 by a friend of 35 years who is a former U.S. assistant attorney and executive at a U.S. attorneys office, which occurred prior to Biden running for president or conducting any investigation directed by the POTUS. He was informed about collusion, corruption, and bribery, which all affected 2016 and what the Democratic party had done vs. what they were hypocritically accusing the Republican party of doing.