I grew up with a cousin whose eyes were different colors, sometimes similar, sometimes interchangeably different.  While navigating my single digit days it freaked meowt a little.  I would guess to myself what color his eyes might be when en route to family gatherings in the back seat of my dads red GTO. My cousin’s eyes became an obsession of sorts, as well as a lesson in conditional acceptance of how things are, rather than how I expected or thought they were. Cookie-cutter fairytales broadcast on the boob tube were redundant and dogmatic compared to reality-based experience, and I realized that my cousin’s eyes were unique, just like my dad’s sports car vs. the neighbor’s gray-suit transportation parked on my blue-collar city block. At some point in my teens, the family doctor explained the eye phenomenon as heterochromia iridum, aka sh’t happens.

“But the average man doesn’t wish to be told that it is a bull or bear market. He desires to be told specifically which particular stock to buy or sell. He wants to get something for nothing. He does not wish to work. He does not even wish to have to think… I had a hard time convincing her [my mother] that I was not gambling, but making money by figuring.” – Jesse Livermore

Trying to figure out the gold chart this weekend was a session of bewilderment, and then it hit me. What I thought I was seeing or expected to see at first glance on the daily was not so. The confusion lifted after drilling down through all time frames, and only then was I able to confidently label the chart. First, as a reference and recap, here is the gold spot weekly chart and technical analysis from my Oct. 15 article Gold Short Squeeze Out of a Commercial Bear Trap.  To view a larger version of any chart, right-click on it and choose your “view image” option.

“Gold printed a low of $1,160.27 on Aug. 16 and a high this morning at $1,231.33. Serious technical damage did occur with that break below the lower trendline drawn up from 2015, but a Golden Cross remained in play on the weekly and the pattern of higher lows since 2015 remain intact. The 50/200 Exponential Moving Averages (EMA) are now reversed but do not qualify as a decisive Death Cross due to upside price action over the last few weeks. However, the 50 EMA must be decisively breached to the upside on the weekly to avoid another negative midterm trend. The 50 EMA was left in the dust on the daily chart last week, along with the topside trendline of a Descending Broadening Wedge. The Bear Trap pattern with a Fibonacci $1,210 lateral appears to be in the bag, too, but would be more secure if the 50 EMA on the weekly is retaken. The DMI-ADX peaked and continues to break down from its negative trend, as the StochRSI reversed into bullish territory. The weekly volume is rising on the price rise and is positive. I remain bullish near-term and long-term, but neutral medium-term. Next target is a battle at $1,250 with the 50 EMA.”

Gold printed a high on Friday of $1,243.44, a rally of $83.17 since the Aug. 16 low. On Oct. 11, a confluence of the Descending Broadening Wedge topside trendline, the 50 EMA, a trendline drawn down from the 2018 high, and the $1,210 Fibonacci lateral on top of the Bear Trap were decisively breached to the upside. The 100 EMA was a source of formidable resistance for the next seven days and 150 EMA during the last four days. At first glance, it looks like a Flagpole & Flag with an upward tilt had taken shape, but it is not as it appears. I will break down the mystery flag on the 4-hour chart below. The overall pattern since the Aug. 16 low is a Measured Move Up  The DMI-ADX remains in a positive momentum stance overall, but the DI+ (green line) indicator has flattened out, with the ADX (black line) remaining in a steady rise since the price took out the 100 EMA. The StochRSI remains topside in overbought territory and could remain there for a while, but may also break south at any time if the price takes a breather. The daily volumes since the 100 EMA breach have been steady but are not showing a rise, and that is neutral. Coincidentally, the overhead 200 EMA is now sitting at $1,250 on the daily, the same resistance level noted on the weekly as the 50 EMA resistance that must be taken out decisively to avoid a medium-turn, negative trend. Friday’s closing candle is a Shooting Star that is typically a bearish signal, but as usual, we must wait to see what this week’s trading action brings to the table. Gold might face some downside pressure in the medium-term if another short squeeze does not materialize soon. 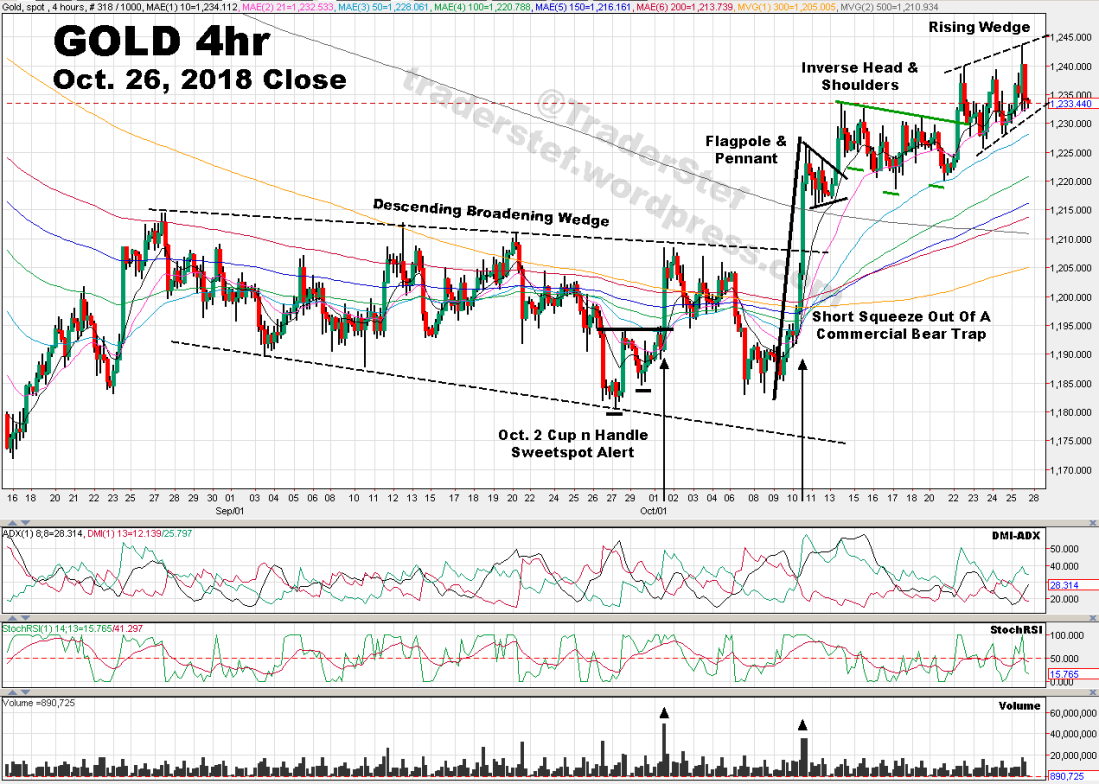 The Cup and Handle is clear on the 4-hour chart and is when I published a sweetspot alert on Oct. 2 where a major short squeeze took place. Note the volume spike that accompanied that price spike back to the Descending Broadening Wedge topside trendline. The next voluminous short squeeze move is the Flagpole and Pennant, decisively leaving all the moving averages in the dust and described as the “gold shorts suffer biggest squeeze since 1999.”  This is where the visual of a subsequent Flag on the daily does not pan out in the details, as the lows and highs do not line up at tap points. Following the Pennant, the price chopped out for seven days to form a bullish Inverse Head & Shoulders.  Price is now chopping within a Rising Wedge with formidable resistance and selling pressure in the low $1,240s. Rising Wedges tend to be bearish, and the StochRSI has broken down to the negative on this 4-hour chart, despite the DMI-ADX still showing a positive trend. I suspect there may be a near-term breather at current price levels or after briefly tapping $1,250 unless another large short squeeze presents itself. Also, take into consideration the recent dollar vs. gold price action.

Since Oct. 2, the USD and gold have risen together in a risk-on, safe-haven environment as the DOW and S&P500 have had their 2018 gains wiped out and the NASDAQ entered bear territory. Keep eyes on this divergence from the norm while deciding what to do near $1,250, with all of the above analyses taken into consideration. Not everything is always as it appears to be.