The price of lumber experienced a steep rise since the depths of the Great Recession and was particularly strong through most of 2017 and 2018.

Framing Lumber Prices Down 30% Year-over-year… “Random Lengths prices are down 27% from a year ago, and CME futures are down 34% year-over-year.” – CalculatedRisk, Apr. 8 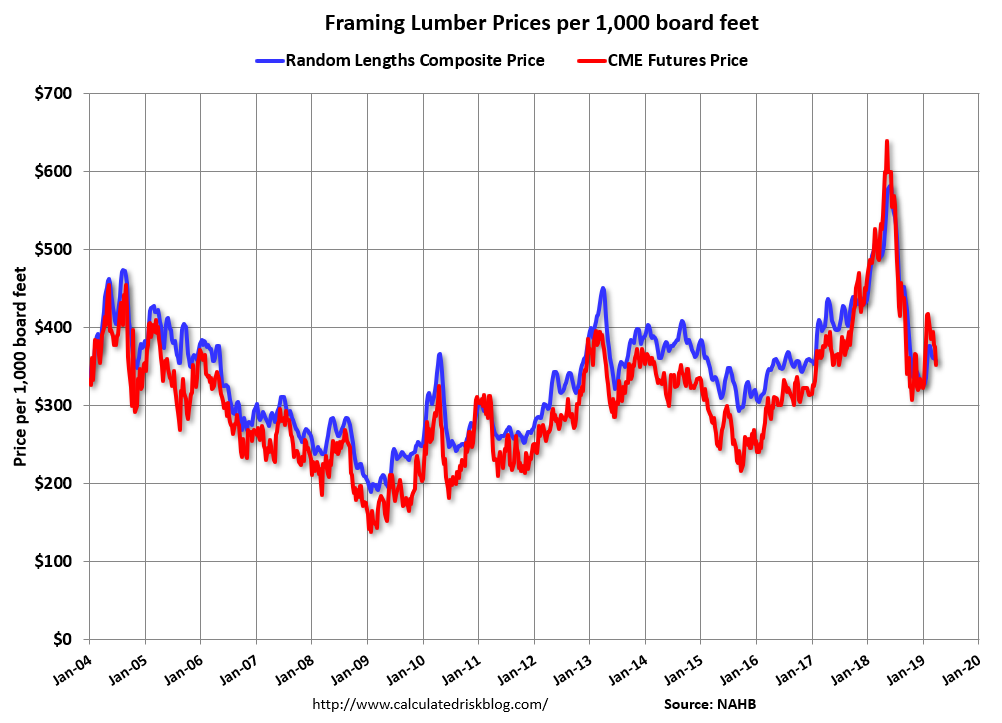 I suspect that expectations for a large infrastructure bill immediately after the 2016 U.S. Presidential Election played a role in the parabolic rally that topped out in 2Q18. Those hopes may resurface due to bipartisan rhetoric on a $2 trillion infrastructure bill that is back on the table as of Apr. 30, and the lumber industry will likely benefit.

The typical seasonal pattern for lumber demand and prices is that it rises during spring when the construction industry stocks up in anticipation of summer projects. However, lumber prices have not recovered this year from the plunge that began in 2Q18 due to several factors that include a stretch of bad weather over the last six months and a housing market teetering on a bubblicious bust.

If you are an investor with concerns that the importation and harvesting of lumber is bad for the environment, consider a few facts instead of the prevailing myths. In most cases, such as the tropical rainforests in South America, the disruption of lumber harvesting actually results in an increase of deforestation and clear-cutting. When the industrial logging of timberland is banned, sawmill operations shut down, employment opportunities are lost, and the value of its timber declines. Landowners who must generate an income from the land resort to burning and clear-cutting in order to make room for cattle grazing or cropland. The truth is that industrial logging operations clear away the old growth so that younger growth and replanting reclamation can flourish, which improves the underlying biology no matter where the forest is located, encourages a landowner not to clear-cut, and the value of the land and timber increase.

It is true that the world’s forests store a huge amount of carbon and are the lungs of the Earth, but recent studies add to a growing body of evidence that young, temperate forests are more effective at sucking CO2 from the atmosphere than old growth or dense rainforests.

Why New Forests Are Better at Sequestering Carbon Than Old Ones… “Younger forests include areas in the eastern United States that were cleared for agriculture long ago but then later abandoned as colonization pushed west in the late 1800s and subsequently incorporated into the U.S. National Forest system and allowed to regrow. Large tracts of boreal forest in Canada, Russia, and Europe have also grown back after deforestation by fire and logging.”  – Pacific Standard, Feb. 2019

Despite deforestation, droughts, fires, and insect infestations, the world’s tree cover has actually increased 2.24 million square kilometers over the last 35 years. That equates to an area the size of Texas and Alaska combined.

Even with the slowdown in housing and major Western economies, some lumber industry analysts are expecting a bounce in prices to begin during 2H19.

2019 lumber market outlook… “Many factors combined to cause two contrasting scenarios: too little supply with rising prices in H1/2018, especially in the U.S., followed by too much supply with declining prices by the end of the year. Delayed shipments occurred first in the U.S. market, mainly the result of weather delays from B.C. (and other factors); this inelastic supply led prices to soar to record levels by mid-year. In the second half of fiscal 2018, the opposite occurred: shipments swamped the market, plunging prices by 50%. While average prices for U.S. structural lumber in 2018 were the highest ever recorded, it is still a tale of two half-years. The outcome is that higher-cost mills in western North America have been curtailing production to contend with below-cost prices, but overall supply and demand fundamentals continue to look reasonable for 2019. As a result, both the Canadian and U.S. divisions of FEA are forecasting a pleasant surprise in lumber pricing in 2019; in fact, the second-highest average annual levels could be seen. This may be a difficult scenario to fully grasp given the lows reached in December 2018, so here is the analysis behind our conclusions.” – Wood Business, Jan. 2019

Consider the following stocks for your watch lists. As summer approaches, keep an eye on lumber futures, the global economy, and the infrastructure bill being hashed out between the POTUS and U.S. Congress.