After scanning all the mining stocks on June 2, my summer intern and I selected a few miners to consider from a technical analysis point of view. Many looked promising due to the rally in gold that began at the end of last week, but few adhered to selection preferences. The primary filter is high volume with a minimum of 1 million shares traded on an intraday basis and no dead minutes to ensure tradable liquidity for scalps or swings, and then chart patterns and studies that indicate the potential for a near-term rise in price. The last issue you want regardless of your investment time horizon is to be sitting on a large block of shares with no liquidity and a bid/ask flow and volume giving you the middle finger when trying to close out positions.

Overall, the miners continue to suffer in price performance despite the primary bull accumulation phase in gold since its Dec. 2015 low. The mining industry is undergoing a transformation process and major miners are busy with mergers and acquisitions, consolidating resources, lowering costs, and acquiring or merging with existing mines that have proven reserves and successful exploration programs in a peak gold world.

“In our opinion, such an extent of creative destruction within an industry is healthy in the long term. It seems that the industry is in the process of setting new priorities. Profitability, capital discipline, and stable cash flow per ounce are now preferred over maximum gold production… The gradual deterioration in the production profiles of many major producers is likely to continue… The top ten producers were responsible for only 25% of gold production in the previous year. In 2010, the figure was 38%. Moreover, the duration from first discovery to production has further increased in recent years. The average lead-time from first targeted exploration to production was 20-years for the 40 major new primary gold mines. On average, 13-years were spent on exploration work, while 7-years were required to establish the feasibility of commercial production. For us as investors, this results in the realization that ‘discovery investing’ in junior explorers will become increasingly important.” – Incrementum’s “In Gold We Trust Report,” May 2019 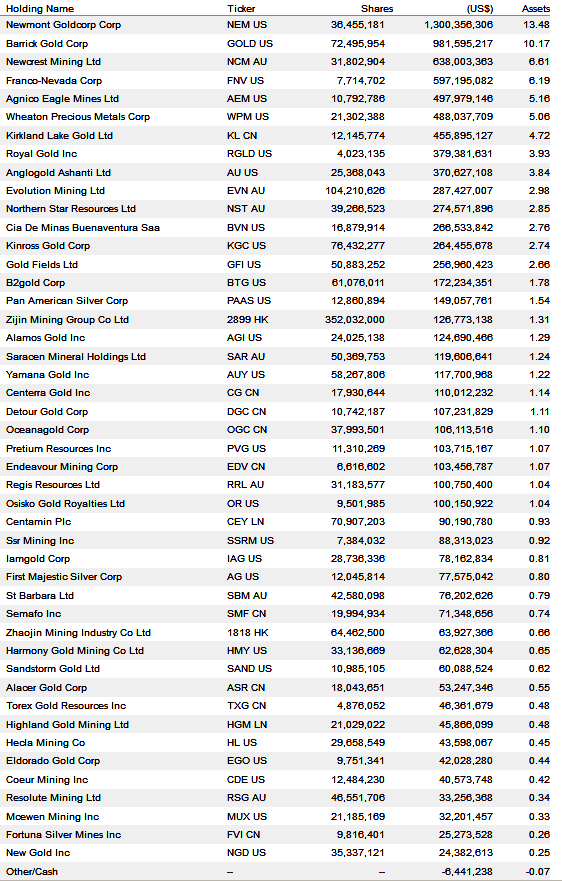 “After GDX reached a high of $66.98 in Sep. 2011, the price plunged 88%+ over a 4 1/4-year period to end with a $12.40 low in Jan. 2016. The price pivoted to a high of $31.79 by Aug. 2016, then formed a Falling Wedge until its topside trendline was breached in Jan. 2019. The Dec. 2018 monthly buy volume reversed the StochRSI into a positive trend as the price began to exit the Falling Wedge and made a final push upwards in January. The DMI-ADX also reversed to a positive stance vs. negative, but it remains indecisive. The overhead 21 Exponential Moving Average (EMA) and Simple Moving Average (SMA) were taken out with hesitation and the 50 SMA at $23.20 is now resistance. The buy volume will need to come back to life for the price to breach the 50 SMA and rally to the 23.6% Fibonacci at $25.30, which is where previous attempts have failed over the last 2 years.” 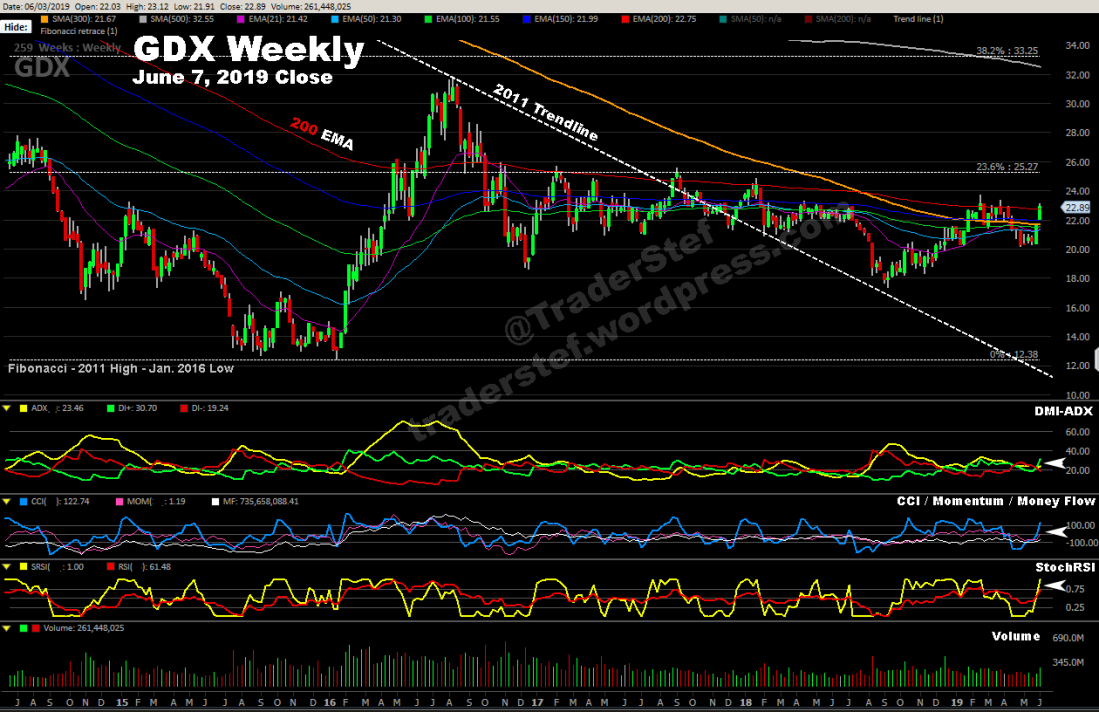 There has not been much of a change on the monthly chart since Feb., when the 50 SMA was topside resistance near $23.20 and the price action mirrored gold’s Falling Wedge off its Feb. 20 high of $1,346.75.

The price action on the weekly chart opened at $22.30 with a high of $23.12 and closed today at $22.89 for the week. The price is once again challenging the overhead 200 EMA resistance level. The positives include a potential Alligator Tongue setup on the DMI-ADX, the StochRSI has broken out into positive momentum, the Commodity Channel Index (CCI) and Momentum (MOM) indicators are rising, and there is a slight uptick in the buying volume this week compared to last week. 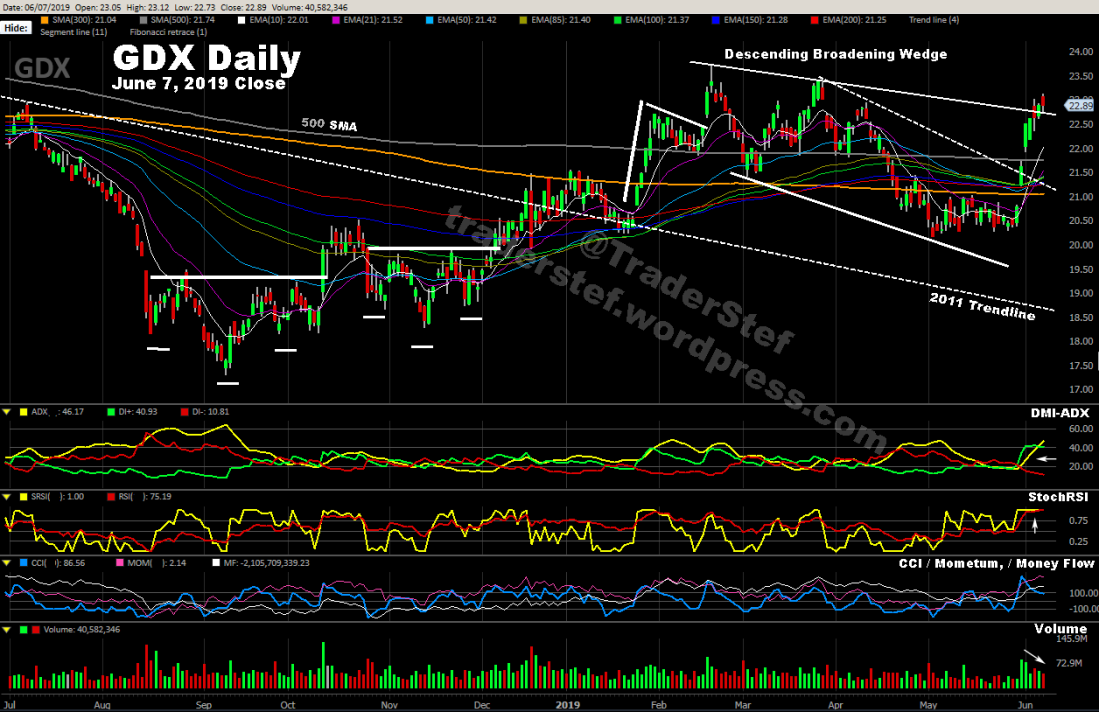 “The Flagpole & Flag pattern is consolidating above the 500 SMA, which was the last moving average to remain above the price action until Jan. 30. A 50/200 EMA Golden Cross occurred at the peak of the Flagpole. The DMI-ADX remains in a positive trend, the StochRSI is hesitating, and as noted on the monthly, the buy volume will need to come back to life for the price to breach the 50 SMA on the monthly and rally to the 23.6% Fibonacci level at $25.30.”

After mirroring gold’s Falling Wedge price action that began in late Feb. 2019, which formed a Descending Broadening Wedge on the GDX, the price fell back below all the moving averages. The price has recovered from all of those losses over the last seven trading sessions. Over the last three trading sessions, the price has been attempting to break free from the topside trendline of the Descending Broadening Wedge. The DMI-ADX has a strong momentum signal, the StochRSI has topped out into overbought territory, and the CCI and Momentum studies remain elevated. The buy volumes spiked on the initial surge in price but fell off while challenging the topside trendline of the Descending Broadening Wedge.

If gold manages to break above its $1,350 resistance with conviction in the near-term, I suspect the miners will follow with gains in price. The next price target and resistance on the GDX would be the overhead Fibonacci level at $25.30, and then the 38.2% Fibonacci at $33.25. The chart appears bullish, but it would be prudent to wait for gold to make its move first and see if volume on the GDX returns to a rising trend along with the price.