Mainstream media reports tout 5G wireless technology as one of the best things since sliced bread. The world is moving into the “Internet of Things” (IoT) that will expose your body to exponentially higher levels of electromagnetic radiation, and you must get on board or live in the stone age.

What you are likely not hearing much about are the evidence-based studies from around the world that document the harmful effects of pulsed radiofrequency radiation (RFR) from cell phones, cell towers, smart meters, and other devices. Those microwaves penetrate your body and all other living things on the planet and contribute to disease and psychological harm.

Poland’s bold step to curb electromagnetic pollution reflects growing evidence of harm… “As Kraków, Poland’s second city, takes steps to protect its citizens from rising electromagnetic ‘smog’ from mobile phones, wifi, Bluetooth, smart meters and other devices, Lynne Wycherley summarizes 2016’s news highlights on the emerging bio-risks of rising exposure to non-ionisiong radiation. For how much longer can governments continue to ignore the growing evidence of harm?” – The Ecologist, Jan. 2017

Electromagnetic and Radiofrequency Fields Effect on Human Health… “For over 50 years, the American Academy of Environmental Medicine (AAEM) has been studying and treating the effects of the environment on human health. In the last 20 years, our physicians began seeing patients who reported that electric power lines, televisions and other electrical devices caused a wide variety of symptoms. By the mid 1990’s, it became clear that patients were adversely affected by electromagnetic fields and becoming more electrically sensitive. In the last five years with the advent of wireless devices, there has been a massive increase in radiofrequency (RF) exposure from wireless devices as well as reports of hypersensitivity and diseases related to electromagnetic field and RF exposure. Multiple studies correlate RF exposure with diseases such as cancer, neurological disease, reproductive disorders, immune dysfunction, and electromagnetic hypersensitivity.” – AAEM, 2019 Fall Meeting

The Federal Communication Commission (FCC) admitted in testimony that it has not studied the safety of 5G. Current FCC safety guidelines originate from a 1996 study on RFR using mannequins, which is inadequate. The following excerpt from a 2011 white paper entitled “Electromagnetic Biology and Medicine” by Inform Healthcare explores the insufficiency of the 1996 study and guidelines.

Exposure Limits: The underestimation of absorbed cell phone radiation, especially in children… “The existing cell phone certification process uses a plastic model of the head called the Specific Anthropomorphic Mannequin (SAM), representing the top 10% of U.S. military recruits in 1989 and greatly underestimating the Specific Absorption Rate (SAR) for typical mobile phone users, especially children… In the United States, the FCC determines maximum allowed exposures. Many countries, especially European Union members, use the “guidelines” of International Commission on Non-Ionizing Radiation Protection (ICNIRP), a non-governmental agency. Radiofrequency (RF) exposure to a head smaller than SAM will absorb a relatively higher SAR. In addition, SAM uses a fluid having the average electrical properties of the head that cannot indicate differential absorption of specific brain tissue, nor absorption in children or smaller adults. The SAR for a 10-year old is up to 153% higher than the SAR for the SAM model. When electrical properties are considered, a child’s absorption can be over two times greater, and absorption of the skull’s bone marrow can be ten times greater than adults. Therefore, a new certification process is needed that incorporates different modes of use, head sizes, and tissue properties. Anatomically based models should be employed in revising safety standards for these ubiquitous modern devices and standards should be set by accountable, independent groups.”

The World Health Organization (WHO) is also not performing research or funding of any scientific studies, but said it plans to review scientific evidence after the 5G network is implemented.

5G RF is a witch’s brew of radiation that includes microwaves, low-energy radio waves, and millimeter waves that harness a lot more energy. 4G frequencies go as high as 6 GHz, and 5G pulsed signals are in the 30 GHz to 100 GHz range that have not yet exposed humanity in mass to such high frequencies. 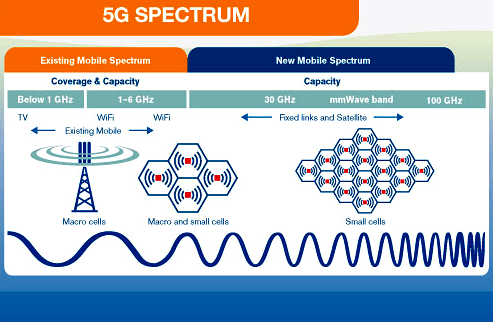 As a thought experiment to drive home the point of how much exponentially higher 5G is from RFR and may affect your biology, consider plant and animal kingdom issues without 5G. Humans, plants, and animals have adapted to the Earth’s electromagnetic field, which includes direct current (DC) magnetic fields, DC electrical fields, and low-frequency Schumann resonances (SR).

“SR is a set of spectrum peaks in the extremely low frequency (ELF) portion of the Earth’s electromagnetic field spectrum. Schumann resonances are global electromagnetic resonances, generated and excited by lightning discharges in the cavity formed by the Earth’s surface and the ionosphere.”

The birds and the bees use magnetically-sensitive substances called cryptochromes, which allow them to navigate the world and control their immune systems. Cryptochromes are protein pigments that exist in almost all animals, plants, and bacteria. They assess available light to manage and reset circadian rhythms. Some animals and insects use cryptochromes to detect the direction of the Earth’s magnetic field for navigational purposes. When cryptochromes are impaired by unnatural electromagnetic fields, it disrupts insects’ and animals’ ability to live and travel on the Earth and weakens their immune systems.

When considering how insects and animals function, I cannot help but think about the phenomenon of bee colony collapse, self-beaching whales, and birds falling out of the sky as examples. RFR can blind an animal or insect’s perception of the Earth’s magnetic field, as well as disrupt their circadian rhythm. Birds disappear from or die in areas that are in the immediate vicinity of cell towers and antennas.

US Department of the Interior warns: Communication towers threaten birds… “Two hundred forty one bird species are at mortality risk from both tower collisions and from exposure to the radiation towers emit.” – EMF Safety Network, Apr. 2014

The daily circadian rhythm of a human controls the level of melatonin in our bodies, and at night, our body’s metabolic resources focus on cell repair and immune system strengthening. If melatonin production is hampered in any way, that results in tiredness during the daytime and lack of sleep at night, among other issues. Since the human immune system is supported by melatonin, it may never gather the energy required to effectively destroy pathogens or cancer cells before they get out of hand, which leads to chronic disease conditions. As a result, we have an increase in such issues among the population and planet at large.

I will leave you this evening with food for thought. Here is your brain on 5G exposure, with no smart phone required.