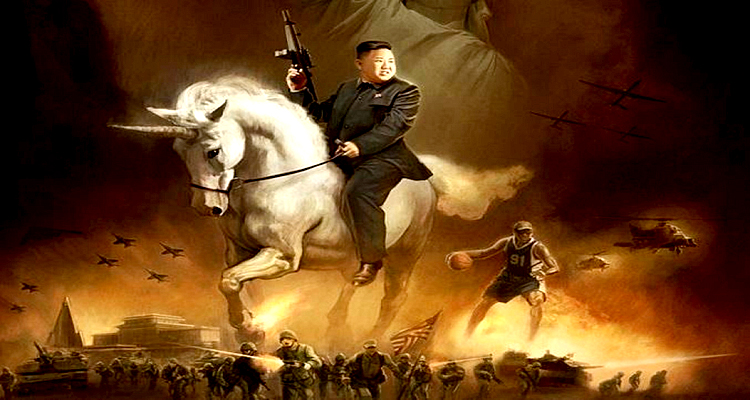 Over the last several months, North Korea has hinted that it is willing to back out of the agreed moratorium and negotiations on nuclear and long-range missile tests if the United States does not succumb to significant concessions. Kim Jong-un wants the POTUS to lift international sanctions, provide security guarantees, and make additional sacrifices in return for abandoning its nuclear arsenal.

The February summit in Vietnam was the second meeting between the POTUS and Kim Jong-un, but it collapsed after the U.S. refused Kim’s demand for sanctions relief in exchange for disassembling its main complex used for producing nuclear components.

North Korean Envoy Hails Bolton’s Ouster… “North Korea blamed hawkish aides to Mr. Trump, especially Mr. Bolton, for the stalemate, demanding that they be removed from negotiations. North Korea, which called Mr. Bolton a ‘war maniac’ and ‘human scum’ at various times, was particularly incensed when he championed the so-called Libyan model of forcing North Korea to quickly give up and ship out its nuclear arsenal before granting the country any rewards. Libya’s dictator, Muammar el-Qaddafi, was killed in 2011 after relinquishing his country’s nascent nuclear program. Pyongyang appeared to have had its wish fulfilled when Mr. Trump ousted Mr. Bolton and later called his North Korea approach a mistake.” – NYT

Soon after the breakdown in negotiations, North Korea began launching short-range ballistic missiles and the Trump administration was not happy about the implications it would have on diplomatic efforts on denuclearization going forward. At the same time, the U.S. seized a North Korean ship that violated sanctions by carrying banned exports of coal and a research group discovered the Yusang-ni missile operating base that appears to be a hiding place for North Korea’s arsenal of long-range missiles.

The POTUS and Kim Jong-un held an impromptu and historic meeting at the Korean DMZ border in late June where tentative plans were made to restart diplomacy, but a preemptive attempt in Sweden in early October failed to produce any results and the bromance began to fade into the sunset.

“I have told Kim Jong-un what I truly believe: That, like Iran, his country is full of tremendous untapped potential, but that to realize that promise, North Korea must denuclearize.” – POTUS, Oct. 1

North Korea breaks off nuclear talks with U.S. in Sweden… “The North’s chief nuclear negotiator, Kim Myong Gil, who spent much of the day in talks with an American delegation, cast the blame on what he portrayed as U.S. inflexibility, saying the other side’s negotiators would not ‘give up their old viewpoint and attitude’… The U.S. State Department said Kim’s comments did not reflect ‘the content or spirit’ of more than 8-1/2 hours of talks… Kim downplayed the U.S. gestures…. It would only happen ‘when all the obstacles that threaten our safety and check our development are removed completely without a shadow of doubt,’ Kim said, in an apparent reference to a desire for Washington to ease economic pressure… ‘I think (North Korea’s) expectations were too high that the removal of Bolton would provide more flexibility on what the U.S. wants as initial steps,’ said Jenny Town, a managing editor at 38 North, referring to Trump’s former aide John Bolton, who was abruptly fired last month amid disagreements on how to tackle foreign policy challenges.” – Reuters, Oct. 5

In November, North Korea said it did not consider a U.S. decision to postpone a joint military exercise with South Korea to be a major concession that would bring their team back to the negotiating table. Senior North Korean Ministry Advisor Kim Kye Gwan said his country had no interest in giving Trump further meetings to brag about unless it receives something substantial in return.

North Korea warns US to prepare for a ‘Christmas gift’… “Speaking in London on the sidelines of a NATO summit on Tuesday, President Donald Trump said ‘we’ll see what happens’ when it comes to North Korea. ‘My relationship with Kim Jong-un is really good, but that doesn’t mean he won’t abide by the agreement we signed… We have the most powerful military we ever had, and we are by far the most powerful country in the world and hopefully we don’t have to use it. But if we do, we will use it… I hope he lives up to the agreement, but we’re going to find out… (Kim Jong Un) definitely likes sending rockets up, doesn’t he? That’s why I call him Rocket Man.’” – WDSU, Dec. 5

Kim Jong-un has publicized his second ride on a white horse to North Korea’s sacred snow-covered Mount Paektu. State-controlled media published images that show him “riding a steed through knee-high virgin snow” with his sister and top military brass galloping alongside him. 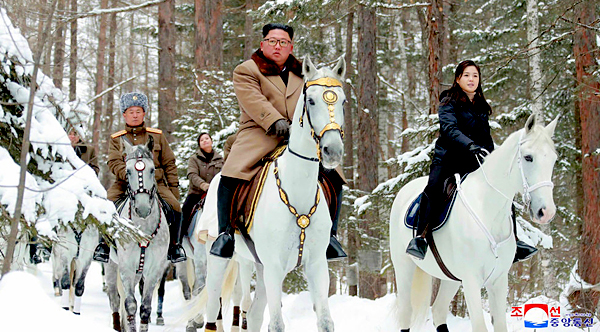 In the past, when Kim Jong-un wanted to show North Korea and the outside world his resolve before making a major policy shift, he would travel to the mountain near the Chinese border and Samjiyon County. That location is worshipped as the birthplace of the North Korean regime. North Korea has repeatedly warned that the U.S. has until the end of December to produce a more flexible approach and proposal on how to denuclearize the Korean Peninsula and raised fear amongst analysts that he may completely abandon diplomacy and resume missile and/or nuclear testing. This past Wednesday, North Korea announced that it is convening the Central Committee this month in order to discuss and decide on crucial issues.

North Korea has reverted from a willingness to negotiate and denuclearize to insults and belligerence. Today it announced that denuclearization talks with the U.S. were “out of the negotiation table” and slammed the European U.N. Security Council after they denounced the most recent ballistic missile launches.

It appears that Rocket Man publicly acknowledged what many intelligence analysts suspected for two decades. Be prepared for a potential worst-case scenario.