Efforts by the Federal Reserve to placate markets since the REPOcalypse in mid-September have the potential to morph into a much larger money printing operation for global financial markets, which would confirm doubts that Chairman Powell’s “not QE” is not sufficient to stem the tide. Chatter among analysts suggested that pressure will continue to build despite the Fed’s success at suppressing a spike as high as 10% in short-term interest rates with a liquidity crisis in the dark corners of overnight interbank lending and repo operations.

“We end this decade not having a clue or any foreseeable scenario under which central banks will ever raise rates again. Nearly 11 years after the Great Financial Crisis (GFC). Ponder that. We are all like frogs slowly boiled in a pot getting numb to the ever greater absurdities imposed on this global financial system. All under the auspice of keeping it together. And everybody just shrugs their shoulders, expecting more of the same consequence free.” – Northman Trader, Dec. 10

In a repo trade, Wall Street institutions and banks offer U.S. Treasuries and other high-quality securities as collateral for cash, most often only overnight, in order to fund trading and lending needs. The following day, borrowers repay the loan plus a rate of interest to get their bonds and other collateral back.

How did the Fed initially respond in September?

The “Not QE” TaperCaper Duck Quacks Like QED… “After the Fed extended temporary repos that began in September out to November, it fired off a bazooka today… It appears that $60 billion of “not QE” a month is not enough to plug a growing list of liquidity holes under the hull of the global banking Titanic, as the Fed will continue with $75 billion in overnight repos and $35 billion in term repos twice a week until the second quarter of 2020. Under the current plan, the Fed’s balance sheet will revisit the $4.3 trillion mark by June of next year. Keep in mind that the Fed went from holding less than $1 trillion in assets in 2007 to roughly $4.5 trillion in 2015. The quantitative tightening (QT) TaperCaper slowly trimmed its balance sheet back to under $4 trillion, but that move shrank the level of reserves available to banks.” – TraderStef, Oct. 11

The Time is Close for Gold’s Next Move – Technical Analysis… “While the Fed is pressing the pedal to the floor with a “Not QE” repo liquidity crush at the end of 2019, one must ask which niche in the financial plumbing is on the precipice of a potential implosion this time around. I do not have a specific answer to that question, but the circumstances are in the process of surfacing.” – TraderStef, Nov. 30 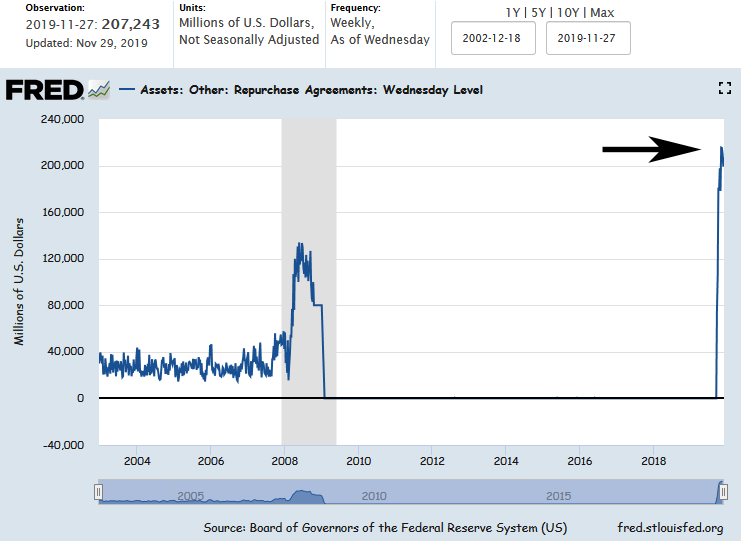 The Bank of International Settlements (BIS), the central bank of central banks, took a stab last week at explaining how the current liquidity issue evolved:

September stress in dollar repo markets: passing or structural?…  “The reasons for this dislocation have been extensively debated; explanations include a due date for U.S. corporate taxes and a large settlement of U.S. Treasury securities. Yet none of these temporary factors can fully explain the exceptional jump in repo rates… Repo markets redistribute liquidity between financial institutions: not only banks (as is the case with the federal funds market), but also insurance companies, asset managers, money market funds and other institutional investors. In so doing, they help other financial markets to function smoothly… The freezing-up of repo markets in late 2008 was one of the most damaging aspects of the GFC.” – BIS, Dec. 9

An unwillingness of the top four U.S. banks (unnamed by BIS) as marginal lenders to loan cash, combined with a sudden increase in demand from hedge funds, were contributing factors for the rate spike in September. The exact cause is unclear, but the Fed’s QT program and growing reliance on the largest U.S. banks to keep repo markets afloat are common denominators. Those banks became net providers of funds for repo market operations and account for more than 50% of all Treasuries held by U.S. banks at the Fed. The repo market is the glue that holds together the financial system and its liquidity needs must be met to ensure operations do not lock up and cause a cascading credit crisis, the likes of which occurred in the mortgage-backed derivatives implosion during the GFC. The BIS also warned of future funding problems and said the Fed’s analysis of the September REPOcalypse was deficient.

Credit Suisse analyst Zoltan Pozsar published a REPOcalypse analysis yesterday that predicts an official launch of QE4 before Jan. 2020 to rebuild the shrinking of bank reserves that occurred during the Fed’s QT program.

“In our view, the FX swap market is expecting too much similarity between the current year-end turn to last year’s turn. That is a mistake as last year’s dynamics were different: (1) large U.S. banks still had excess reserves to lend, but this year they do not; and (2) they got a G-SIB [global systemically important banks] relief from a 20% fall in equities, but this year-end they do not. Lower G-SIB scores allowed large U.S. banks to spend their hoards of excess reserves on more complex trades like FX swaps, and the year-end turn went down as a non-event – in FX swaps, but not repos. Recall that repo printed at 6.5% on December 31 spot. This year may be the opposite… If carry-trades make the world go ’round, and reserves make carry possible … the day we run out of reserves would be the day when the world would stop spinning. No, this is not an overstatement.”

Pozsar believes that an upcoming spike in Treasury yields will spill into risk assets and equities. The FX swap market could trigger forced sales of Treasuries by the end of the year and funding stresses would pull capital away from stock market strategies and result in a broader equity market selloff.

It’s About To Get Very Bad – Repo Market Legend Predicts Market Crash… “In short, when Pozsar speaks (or as the case may be, writes), people listen (and read)… All we can say here is that ten days before Lehman filed, there were massive market wide repo problems and almost nobody understood them… with one exception: Citi’s Matt King laid out all the problems in his iconic Sept 5, 2008 piece “Are the Brokers Broken” in which he predicted the collapse of Lehman. Ten days later, he was right. Will Zoltan Pozsar be this generation’s Matt King? – Zerohedge, Dec. 10

I recommend that you take the time to watch HEDGEYE’s Keith McCullough interview former Fed advisor Danielle DiMartino Booth, where they discuss the current economic setup, Fed policy, and the implications for financial markets. This webcast aired at 11am this morning.

Meanwhile, gold is increasingly viewed in the mainstream as the only real hedge in today’s financial and geopolitical environment, as central banks and the super-rich continue hoarding those worthless pet rocks in record amounts. The price of gold has gained 50% since its Dec. 2015 low and stands at 40% as of today’s spot price following the pullback and consolidation since the Sep. 2019 high. 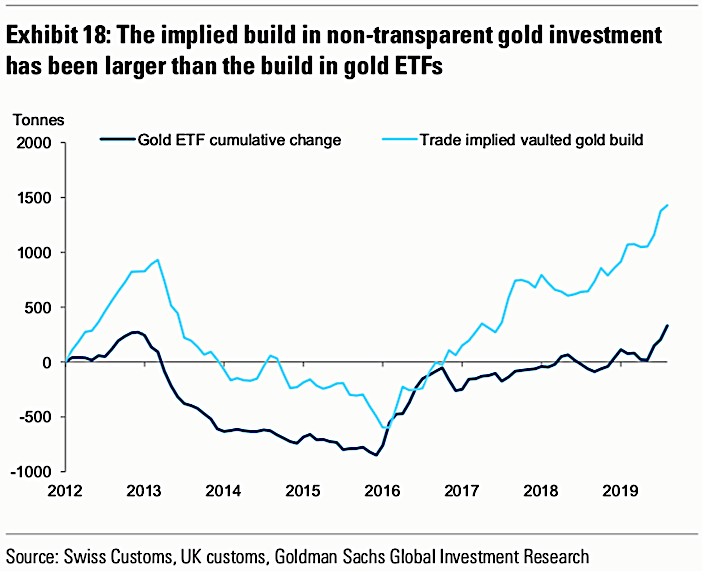 The world’s super-rich are hoarding physical gold… “This data is consistent with reports that vault demand globally is surging. Political risks, in our view, help explain this because if an individual is trying to minimize the risks of sanctions or wealth taxes, then buying physical gold bars and storing them in a vault, where it is more difficult for governments to reach them, makes sense. Finally, this build can also reflect hedges by global high net worth individuals against tail economic and political risk scenarios in which they do not want to have any financial entity intermediating their gold positions due to the counter-party credit risk involved.” – Goldman Sachs via Yahoo Finance, Dec. 10

Why this expert is confident gold prices will break past $1,900 in 2020… “The monetary base is never going to go down… Gold is not a way to speculate and make a big profit; it is a way to protect your wealth. It is wealth insurance… You should be interested in things when people disparage you say you are interested in them… We are calling for gold to take out its old high of $1,900 in the spot market and we feel really confident about that.” – E.B. Tucker via Kitco News, Dec. 10

According to the latest data from the World Gold Council, central banks added 41.8 tons of gold to their reserve hoard in October. Turkey took the lead for the second month in a row by adding 12.8 tons. Turkey takes the first-place spot away from Russia this year with 144.8 tons thus far. Russia added 10.2 tons in October and brought their total to 139 tons. More than a dozen central banks have purchased a total of 589 tons on a net basis so far in 2019, continuing a trend seen in 2018 when they accumulated 651.5 tons, which was the highest level of annual net purchases since 1971 and second highest on record.

If you’re able, be sure to follow me on Twitter to get real-time updates on markets and technical analysis.  Less than 48hrs after publishing the above article, the Fed pulled a REPO bazooka trigger on Dec. 12.  They’re going to blowout their balance sheet (aka money printing or quantitative easing ) well beyond what occured during the Great Financial Crisis level.