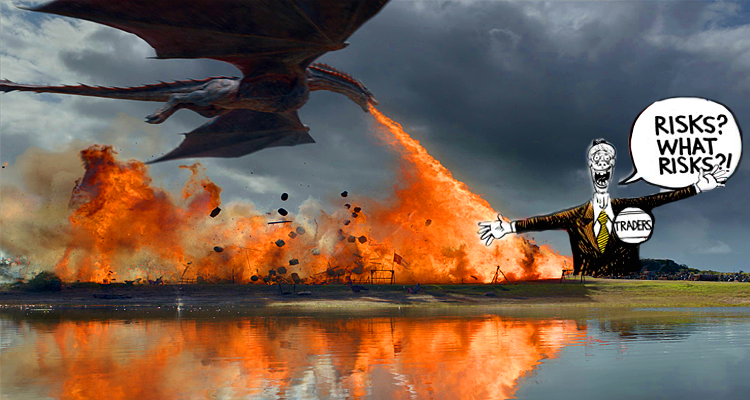 Iran pulled the war trigger this evening against U.S. military targets in Iraq, and other areas in the Middle East region could be on their menu. A big hat tip to OutdoorsMc for contacting me, as my head and fingers were busy preparing tonight’s technical analysis update on gold. If you need a synopsis on what is happening with Iran, go to “A Sinking Feeling About Nuclear Persia Part 2 – U.S. Embassy Attacked in Baghdad,” published on Dec. 31, and a chronology of events since posting it can be found in its Twitter thread.

Pentagon says more than a dozen missiles ‘launched from Iran’ against 2 US bases, vows ‘necessary’ counter-measures… “‘Iran launched more than a dozen ballistic missiles against US military and coalition forces in Iraq. It is clear that these missiles were launched from Iran and targeted at least two Iraqi military bases,’ the Pentagon said in a statement on Tuesday, adding that it was now working on ‘initial battle damage assessments.’” – RT

Gold & Oil Spike As Stocks, Bond Yields Plunge After Iran Attack… “Just when you thought it was safe to buy the most expensive, most complacent stock market rally in the world… Iran begins retaliation against America’s killing of Soleimani. Dow futures are down over 400 points.” – Zerohedge

Before moving on to the gold charts, here is a brief overview of what the Fed has been up to. If you have been living under a rock, get up to speed by reading “The Not QE TaperCaper Duck Quacks Like QED,” published on Oct. 11, and “Gold Hoarding Records Set in the Credit Suisse REPO Alps,” published on Dec. 10. 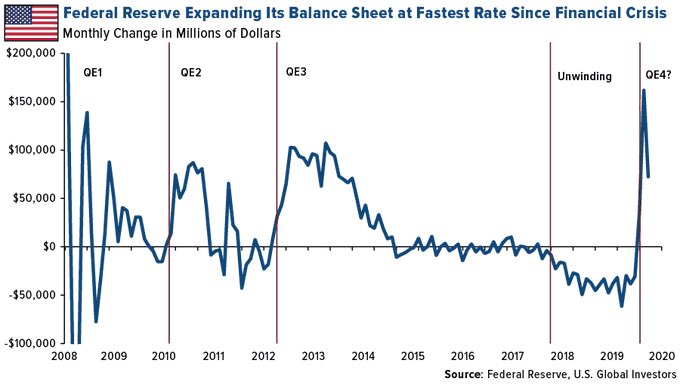 “Welcome to a world in which everything you learned about risk/return analysis in business school is not only worthless but detrimental to your career path. The Fed is paying cash to dumb down an entire investment community.” – Danielle DiMartino Booth, Jan, 2

The Fed Is Creating A Monster Bubble… “Ignoring problems rarely solves them. You need to deal with them—not just the effects, but the underlying causes, or else they usually get worse. In the developed world and especially the US, and even in China, our economic challenges are rapidly approaching that point. Things that would have been easily fixed a decade ago, or even five years ago, will soon be unsolvable by conventional means.” – Forbes, Jan. 3

Former NY Fed President Dudley calls for standing repo facility… “A standing repo facility would let participants convert securities into cash on demand, helping keep short-term rates stable by limiting the potential for sudden cash shortages… Dudley proposed other overhauls to the Fed’s monetary policy toolkit, including ‘de-emphasizing the federal funds rate’ as the central bank’s main policy benchmark… This is ‘far better’ than the pre-financial-crisis rate-control regime that saw the Fed having to intervene via open-market operations on a high-frequency basis, he said in an interview on Bloomberg Radio.” – Bloomberg, Jan. 6 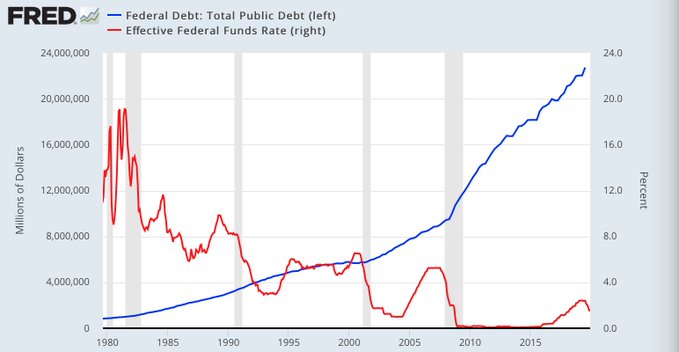 An additional hat tip and huge thank you goes out to Jim Ricards for endorsing my work with a generous note on Twitter. If you are interested in attending my trading workshop, drop me a note via my website. 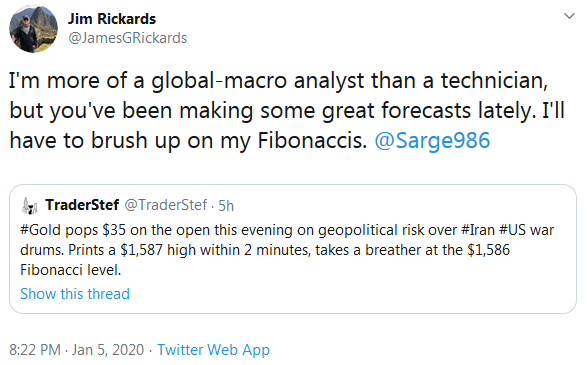 “If you liked gold, oil and bonds before (as we did), you have to love them now. Sometimes we just need a reminder that the world is actually a rather dangerous place.” – David Rosenberg, Jan. 6 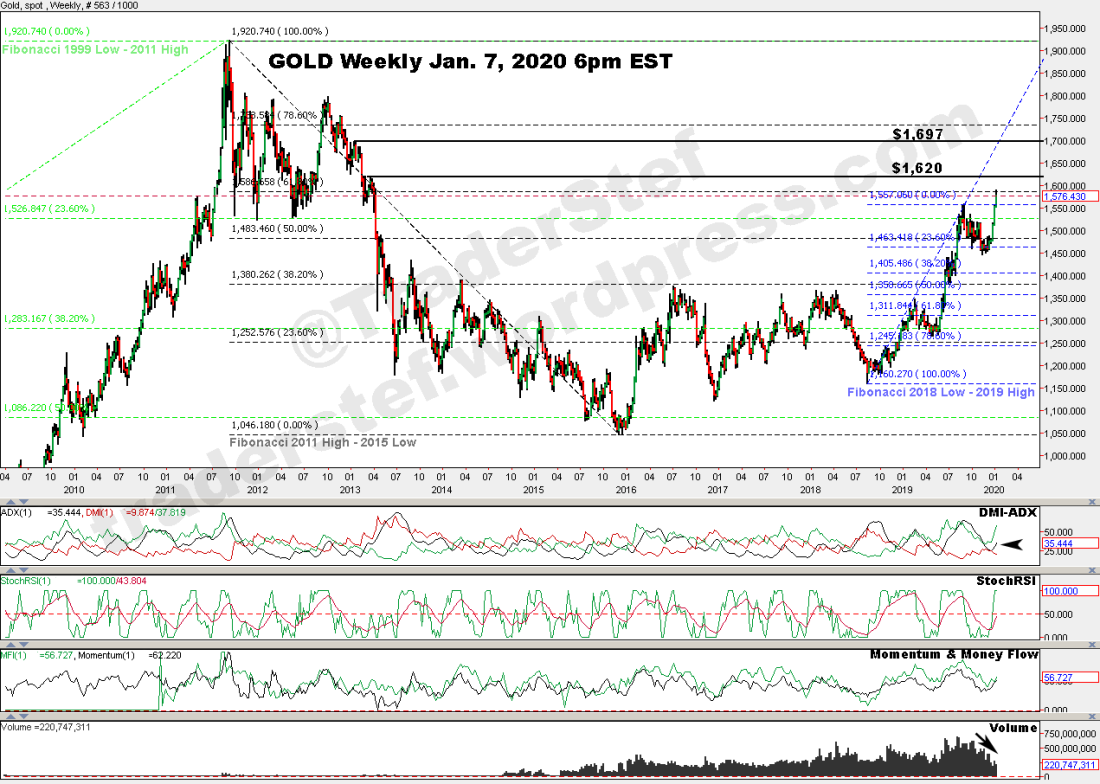 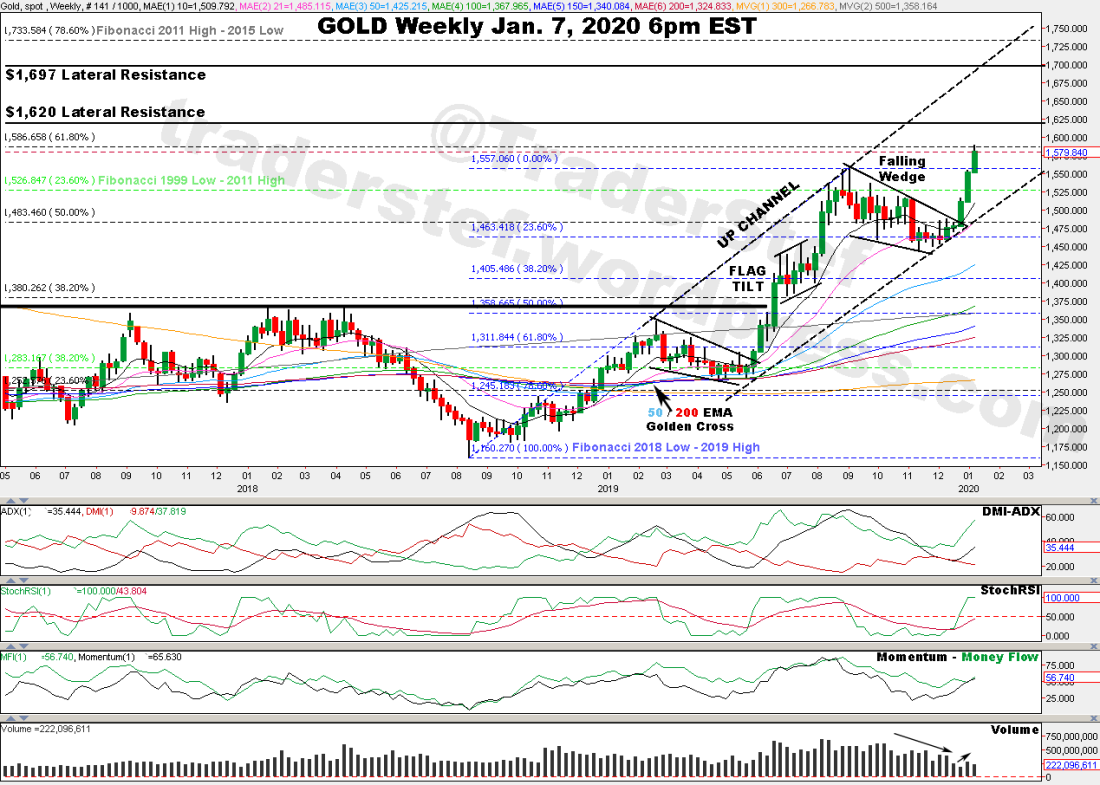 “Over the past four weeks, the price has closed on or around the 21 Exponential Moving Average (EMA) and $1,463 Fibonacci. The high buy Volumes… most especially at the end of the Flag Tilt pattern, are where the current price action found additional support. Despite the pullback since September, no serious technical damage has taken place and the 50 EMA remains well below Friday’s close. At the worst-case scenario of $1,400, even then, the uptrend would remain intact. The DMI-ADX and StochRSI are in oversold territory and the Volumes continue to trend downwards as the Falling Wedge is well into its extension. The negative on the chart is that Momentum and Money Flow have not yet turned upward. I remain bullish long-term but neutral near-term… This environment is ripe for scalping momo plays until a breach of $1,500 and $1,526 entices large position builders to finance a run-up to the $1,586 Fibonacci.”

“After pivoting off the Falling Wedge’s lower trendline on Nov. 12, the gold price has risen steadily with higher lows and higher highs… The $1,446 low found support from large buy Volumes that occurred during the August breakout from the previous Flag Tilt pattern. The price closed this week slightly below the topside trendline of the Falling Wedge and $1,483 Fibonacci level, and closed above the 10 EMA during the last two trading sessions for the first time since the week of Nov. 4… Volumes have continued to fall along with price during this pullback and consolidation, which increases odds that the Falling Wedge has reached its bottom. The Momentum and Money Flow have pivoted upwards for the first time since the Flag Tilt, and the StochRSI appears ready to break away to the upside. The ADX has poked its head back under the DMIs that remain flat and in a positive trend, which sets up the preferred dynamic for an Alligator Tongue pattern if the price breaks out… If buy Volume picks up as we approach Christmas and the New Year, there is a good chance the price will break away from the Falling Wedge and challenge $1,500 and the $1,526 Fibonacci level as we ring in the New Year.”

The $1,500 price level was breached after the U.S. Embassy was besieged by Iranian-backed militias in Iraq on Dec. 31. Following a drone strike that killed General Soleimani and militia leaders in response to their coordination of rocket attacks on U.S. coalition forces on Jan. 2, the $1,526 Fibonacci level was taken out decisively and rallied to the $1,586 Fibonacci. After the $1,579 close today on FOREX during its daily one-hour break at 5pm, headline news that Iran fired ballistic missiles at U.S. forces spiked the price to $1,611 shortly after 6pm. The world is now holding its breath while waiting on the U.S.’s response.

All indicators and studies on the chart are in a bullish stance and the DMI-ADX has a classic Alligator Tongue setup. The $1,620 and $1,697 overhead resistance levels originate from the choppy price action between the $1,920 high in 2011 and downside breach of $1,522 in 2013. There is not much resistance within those levels, and the next target is the $1,733 Fibonacci.

I remain bullish long-term and anything is possible right now, with the potential for a major military escalation in the Middle East region.

Here are a few articles and interviews to peruse before closing up shop tonight:

War By Other Means, The Geopolitics of Money – Rickards vs. Roubini, Nov. 2019