While researching the USD today, I came across a remarkable history on the “dollar.” The following article is a fascinating stroll through time about the first silver dollar, the discovery of radioactive mineralization in Czech silver deposits, and Soviet gulags built around those silver mining operations after WW2 that were the source of raw material for the Soviet’s nuclear weapons program.

Welcome to Jachymov: the Czech town that invented the dollar… “One place where the dollar is not accepted is in the tiny Czech town of Jáchymov ­– which is ironic, because it was here, tucked deep into the wooded folds of Bohemia’s Krušné hory mountains, where the dollar originated 500 years ago in January 1520. But as I pulled a George Washington one-dollar bill from my wallet in Jáchymov’s 16th-Century Royal Mint House museum, the very spot where the dollar’s earliest ancestors were coined (the Thaler), docent Jan Francovič smiled and stopped me.” – BBC

A wave down within a subdued USD uptrend began in September after the Fed’s REPO operation to rescue overnight lending markets (aka a credit crisis), which continues along with an unresolved liquidity crisis because REPO operations will continue through at least April. A chronology of articles on the new REPO activity is located in my Twitter thread on the topic.

The Fed has made it clear since January 2019 that it would pause interest rate hikes and eventually grow its balance sheet after failing at its attempt to normalize monetary policy with quantitative tightening (QT). Despite a robust stock market fueled by the new “Not QE,” the last 12 months of geopolitical unrest, domestic politics, and the shift to an extremely accommodative monetary policy have raised questions about the underlying health of the U.S. and global economy. Here are a few recent articles to read, along with one interview with Judy Shelton regarding the USD, and then we can move on to today’s technical analysis.

Gundlach Doubles Down on Weak-Dollar Call After Resilient 2019… “My highest conviction idea is that the dollar will weaken… As foreigners start to divest from the United States, which I think is going to be a theme of the next few years — it may start this year — you’ll start to see a much weaker dollar.” – Bloomberg, Jan. 7

The Soaring Twenties: 10 Economic and Market Trends to Consider for 2020… “EM stock markets could outperform their U.S. counterparts this year, barring isolated geopolitical or domestic unrest, even in the face of slow economic growth. This means the dollar could weaken against EM and other currencies, and gold could strengthen as a diversification measure.” – Nomi Prins, Jan. 10

Is This Why Central Banks Are Rushing To Buy Gold?… “I would suggest that it’s clear what is going on: They know that a global crisis is about to happen, and so they prepare as any smart investor would, by buying the one commodity that always goes up when the manure hits the fan and most other assets go down. But what is the nature of the crisis they are preparing for? Most likely, a geopolitical conflagration followed by a monetary crisis with the U.S. dollar at the epicenter.” – Alt-Market, Jan. 10

The POTUS views on dollar strength vs. weakness on the Santelli Exchange – Mar. 2019

“A weighted average of the foreign exchange value of the U.S. dollar against a subset of the broad index currencies that circulate widely outside the country of issue. Major currencies index includes the Euro Area, Canada, Japan, United Kingdom, Switzerland, Australia, and Sweden. For more information, see trade-weighted indexes.” – FRED

“There is a Broadening Top drawn back to the 2015 high… A pullback (rally) back above the Broadening Top Lower trendline and 50 Exponential Moving Average (EMA) occurred as per a Broadening Top playbook… The 50/200 EMA did not Death Cross and a trendline of support drawn back to May 2018 developed… The price has fallen for the past four weeks and printed a $95 low on this week’s candlestick, right on top of the 50 EMA and just above the 100 EMA. The Jan. 11 close was $95.66… The StochRSI is bottoming out… The USD chart is a tough call due to the coalescing of geopolitical, domestic, and global economic factors… The USD may kneejerk back into the uptrend based on news flow, but not for long as the world is fleeing the dollar hegemony.”

“Not much has changed with the USD chart since January, as the price continues to chop within a tight range above the 50 EMA… The 300 and 500 Simple Moving Averages (SMA) and all the EMAs continue to line up to support a bullish move vs. the overall chart patterns and studies that are giving a divergent signal, which is why I see price chop rather than a decisive move in either direction. The DMI-ADX never crossed over to a negative momentum, but instead remains indecisive with a flattened stance… The MACD remains negative and continues on a slow downward trend… The bigger picture remains bearish unless a bullish signal appears with conviction in the chart.”

Despite reports of the USD breaking down, when Up Channel trendlines are drawn properly with equal distance between them, the price action has not closed below the channel or printed a lower low. The price closed below the 50 EMA during the first week of Dec. 2019 for the first time since May 2018 but has found support along the Up Channel’s lower trendline and closed above the 100 EMA.

Since printing a $99.66 high in Sep. 2019, the price has fallen 3.4% to a low of $96.35 last week, and it closed on the 50 EMA today at $97.34. For the first time since May 2018, a positive but relatively flat DMI-ADX dynamic has flipped to negative with a classic Alligator Tongue setup, and along with the MACD’s continued downward motion since Aug. 2018, it increases the odds of a break below the 100 EMA and lower trendline in the near-term. However, the StochRSI has poked its head into positive territory with the price rally this week, which indicates that there may be a bounce before breaking down.

The lower support levels are clearly marked with Fibonacci levels and EMAs. A break below the confluence of the Fibonacci level and 150 EMA around $96 are where a lower low may trigger decisive downside price action. I remain bearish long-term on the USD because its overall trend is down, with lower highs since the early 1980s.

The last chart tonight is the $TNX, 10-year Treasury interest rate vs. USD since 1964. The Fed will likely have to lower rates again soon, and they do not want to create a situation where interest payments on U.S. debt would be unserviceable due to rates above the topside trendline. The bull market in bonds continues and a bearish Big M pattern has printed on the chart. 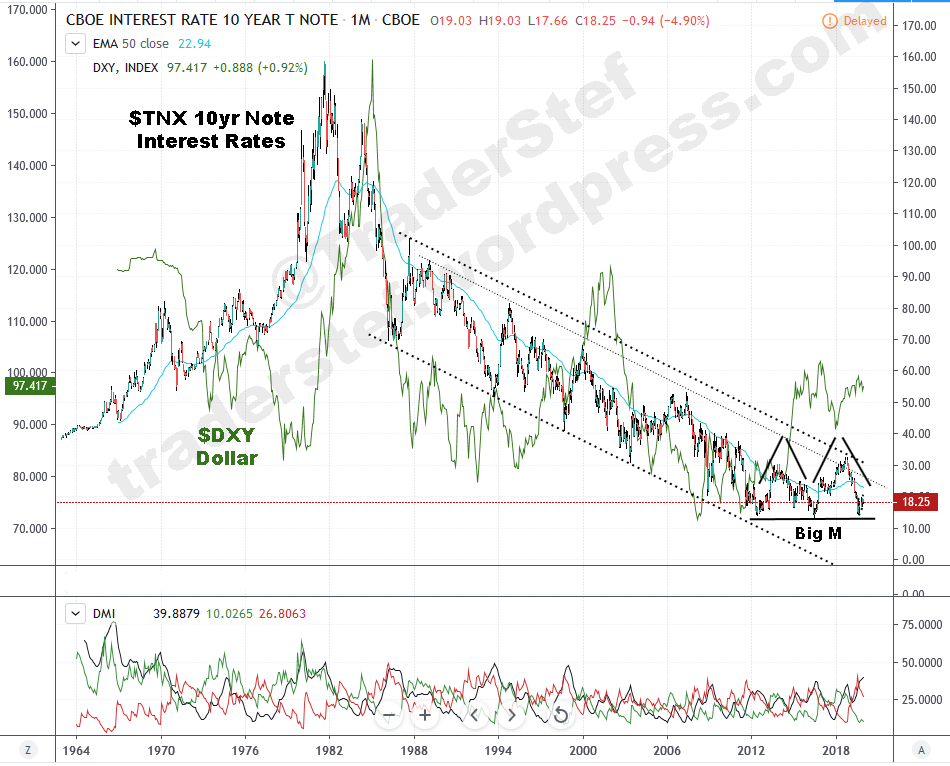