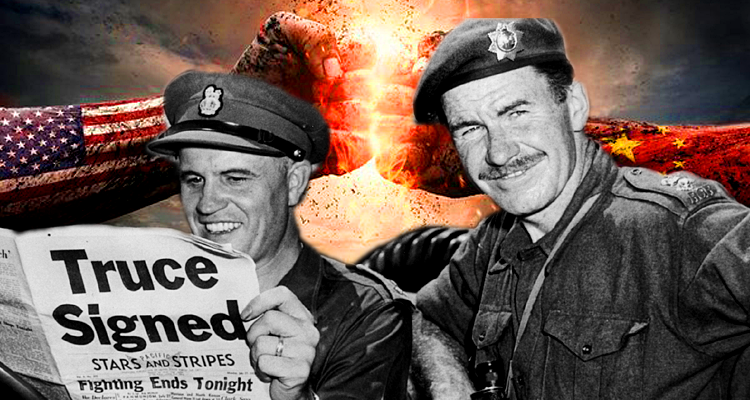 The POTUS and Chinese President Xi had a sit-down on Jun. 29 that lasted 80-minutes with their diplomacy teams at the G20 Osaka Summit in Japan.The U.S. was on the brink of imposing 25% tariffs on an additional $300 billion in goods as the Federal Reserve and financial markets were holding their breath.

“We’re going to work with China on where we left off and see if we can make a deal.” – POTUS

G20 recap: “China got what it wanted (delay). Trump got what he wanted (pump stocks). Huawei got a slight reprieve (face saving). Nothing fundamental changed. Forecast: More of the same until 2020 election. This confrontation has a long way to run.” – Jim Rickards, Jun. 29

I penned the following thoughts in Part 1 on May 15:

“A history of “barbarian handling” influences China’s CCP leadership, which is a tradition of making adversaries become dependent on their economic largesse, subsequently pressuring foreign leaders to shift over to their value systems. The practice prejudices the CCP to see other nations as hegemonic or a vassal state instead of coequals and pushes them to create economic dependence so they can manipulate foreign elite opinions to view Chinese power as advantageous. Those practices result in CCP anxiety that they are always facing the threat of surrender or domestic political disunity. Too many corporate entities and foreign executives that benefited from the boom in China did not seriously consider the downside risks. The CCP was clearly engaging in abusive trade practices for a very long time, and U.S. leadership failed to do anything about it, all the while China had its cake and ate it while ignoring trade rules, laws, and contracts. China has a severe sensitivity to the thought of being pushed around and is unlikely to adapt to a premise that it should behave like everyone else… What is missing from discussion in the Western media is China’s motivation and perspective based on their history, as they appear not to accept that economic integration with other countries through globalization has consequences and will inevitably weaken national sovereignty.”

Bloomberg published an an easy-to-read comparison of statements made by the POTUS and President Xi of China. 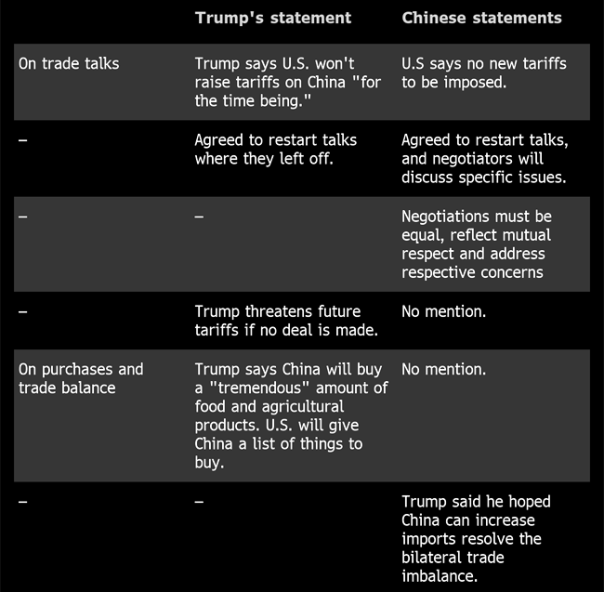 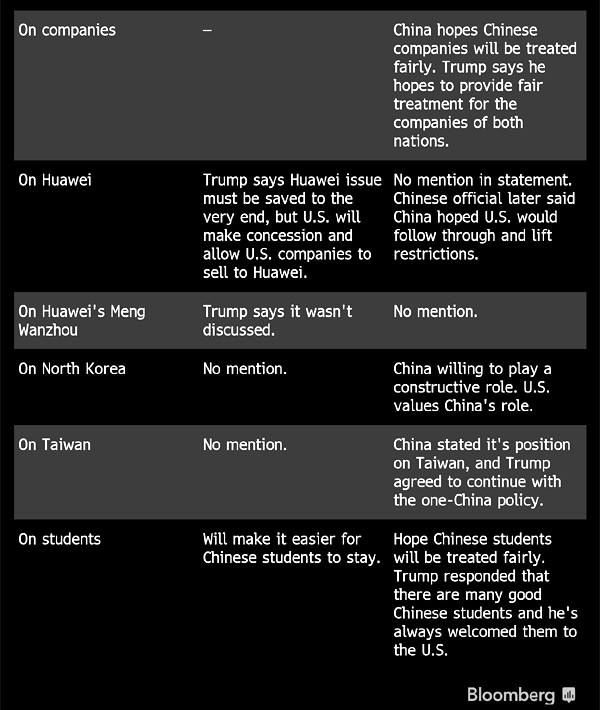 Did China return to the negotiating table because options for retaliation were skating on thin ice? On the other hand, maybe the U.S. folded and saved face by being scant on details because China threatened Rare Earths supplies at the G20 poker table?

Is China Running Out of Retaliatory Ammunition in the Trade War?… “As of today, Beijing has taxed $110 billion worth of US goods, prompting many to argue that China can’t keep up the tit-for-tat contest because China only imported $130 billion of U.S. goods in 2017…However, American and Chinese trade statistics exhibit large discrepancies due to different methodologies. Based on China’s Customs data, the United States exported $154.4 billion to China, which means that as far as Beijing is concerned, it can tax an additional $44 billion as retaliation.” – MarcoPolo, Jun. 5

The financial markets may be relieved and rally with a stalemate thaw following six weeks of bellicose verbal shakedowns, or maybe not.

“The ‘reset button’ being hit on trade talks was the markets’ base-case scenario, and this is supportive for risk, but the lack of a timeline for progress may cap bullish topside ambitions. With no news reading algorithms to steamroll the markets on Saturday, traders will have a 36-hour cooling off period to quantify their next move. I would expect the markets to be orderly on Monday open… Underlying sentiment remains quite bearish in terms of the medium-term outlook for a U.S.-China trade deal as well the global growth outlook.” – Vanguard Markets in Bangkok via Bloomberg

“On balance, if promises are delivered, China has got a good deal, apart from Trump taking the heat off Huawei. He addressed fairer treatment of Chinese students amid a controversial crackdown on visas and admissions and, according to Xinhua, he also promised to uphold the one-China principle after Xi stressed the importance of Taiwan to China. Moreover, the recent unrest in Hong Kong apparently went unmentioned. The U.S. got a Chinese undertaking to buy ‘a lot more’ American farm products and to support more talks between Trump and Kim Jong-un on the North Korean nuclear threat. That said, Beijing knows well this is no more than a truce.” – South China Morning Post

The global economic slowdown is not all due to trade tensions between the U.S. and China. It has more to do with debt saturation and the protracted end to a business cycle. A slowdown in China was underway months before any tariffs were threatened or put into practice. Diminishing returns of Chinese and eurozone monetary stimuli have been a topic of discussion among market pundits since 2017. Within emerging markets, economic weakness during 2018 was the result of multi-year fiscal and trade imbalances with expectations of a weakening dollar and low interest rates. China’s economic slowdown was inevitable and a reduction in U.S. growth estimates is a no-brainer after the longest expansion in history.

A fundamental reason why the global economy is slowing down is excessive debt. 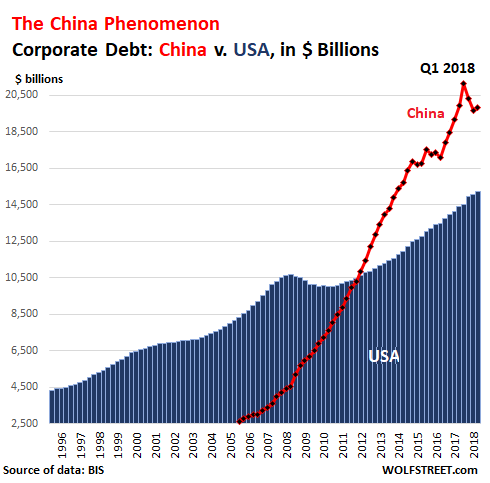 With global debt ballooning beyond a 320% ratio to GDP in 2019 and low productivity growth stalking developed countries, it is no surprise that more debt did not deliver expected growth while overcapacity blunted investment and trade. Real interest rates at  ZIRP and NIRP multiply the damaging effects on the global economy.

A lesser-known issue is the increase in businesses that cannot cover interest expenses on debt with operating profits, which then extend and pretend by accumulating more debt at lower rates that is unlikely to ever be paid back.

The Federal Reserve is about to create a lot more zombies … “Zombie companies are bad for the rest of the economy. Forget about being an economist: Think about the worst company you ever worked for. Think about all the waste that took place — all the money, time, effort and potentially valuable real estate wasted by idiot managers and self-serving bureaucracies and terrible technology and all the rest. Replicate that to make up 12% of the economy. There. Now you understand why economic growth has been so sluggish for a generation. Now you know why the stock market is so hooked on the Federal Reserve.” – MarketWatch, Jun. 24

Concerns over liquidity and debt have had a large impact in global markets while institutional and speculative investment worried about quantitative tightening in the U.S. and normalization of monetary policy at central banks around the world. Now that the central banks suddenly altered their communication to a more dovish tone in 2019 with hopes of soft-landing a business cycle downturn, the effect may not be bullish, but bearish because a failure to normalize at such low interest rates signals the onset of deteriorating fundamental conditions.

Lastly, issues with Huawei on the technology side of the trade dispute are far from over. The POTUS said that the U.S. would hold meetings shortly on how to deal with Huawei and wait until the very end of the trade talks to resolve broader issues surrounding technology transfer and national security. Huawei is currently on a list that prevents the selling of U.S. technology without government approval. A reprieve for Huawei will be short-lived because concerns within the military industrial complex vs. a sanguine Silicon Valley will not be resolved in the near-term.

“Tariffs are not just about economics and manufacturing jobs. It is about self-worth, identity, and people having jobs.” – Steve Bannon