Two very important geopolitical events transpired over the weekend that may negatively affect the price of gold in the near-term. The first was the POTUS and Chinese President Xi having a sit-down with their diplomacy teams at the G20 Osaka Summit in Japan, which resulted in a trade war truce. I covered that issue yesterday with “CHINA: YOU WANT A TRADE WAR, BRING IT ON – PART 2.” Secondly, the POTUS made an on-the-fly trip to the DMZ in North and South Korea for a handshake with Rocket Man, held an hour-long sit-down that may result in a restart of denuclearization talks, and the POTUS became the first sitting American president to walk on North Korean soil.

One story that may have a positive impact on the price of gold in the near-term is Iran’s plan to breach their uranium stockpile limit. I highly doubt that Israel will allow that scenario to go on for very long and the U.S. will have Israel’s back with any military escalation.

If you missed the technical analysis on gold’s price advance since the Aug. 2018 low, I suggest you take a few minutes to review the charts in “Gold’s Alligator Tongue and Asian Short Squeeze Obliterated $1,380 Resistance,” published on Jun. 20. I will not rehash all the details from that analysis today. To view a larger version of any chart, right-click on it and choose your “view image” option.

Here is the gold spot weekly chart as of Jun. 28, overlaid with the Commitments of Traders (CoT) data as of Jun. 25. Note that the CoT data is always delayed by one week. The CFTC’s Jul. 2 CoT data covering the previous week’s price action will be released on a holiday schedule later this week or next.

The purpose of this overlay is to help identify near-term price trends based on positioning by the commercials (bullion banks) and large specs (hedge funds). Almost without exception, the commercial (bullion banks) traders build short positions during a rising price trend and large specs (hedge funds) add long positions to capture the momo play. When the gold price is approaching an inflection point, their positioning begins to flip. It appears that gold is very close to an inflection point or it’s time for a breather and some consolidation. Zoom in to the bottom of the chart and note the Jun. 25 data points marked with red dots. I included the 50 Exponential Moving Average (EMA) and recent Falling Wedge for reference. 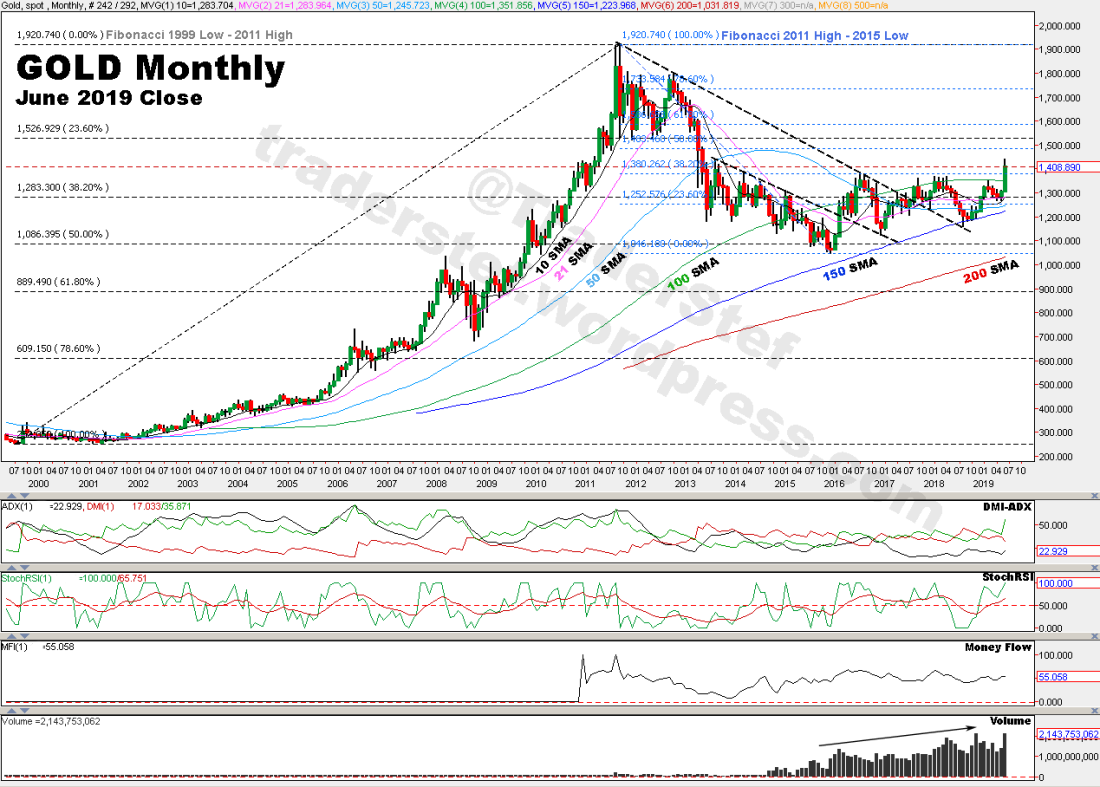 Gold had a wicked run after leaving the Cup ‘n Handle pattern at $1,350 and the $1,380 Fibonacci level in the dust. The problem on the chart is the Plunger Candle, which coincided with the G20 summit and is a warning that there may be further downside. I would not be surprised to see the $1,380 resistance level challenged as a support area. All of the studies are in a bullish stance, but a flurry of risk-off sell orders may take place at the 6pm EDT open and overnight on Sunday in reaction to the risk-off geopolitical points scored by the POTUS over the weekend.

As a reminder, nobody cares about silver until it breaches $21.50 with conviction.