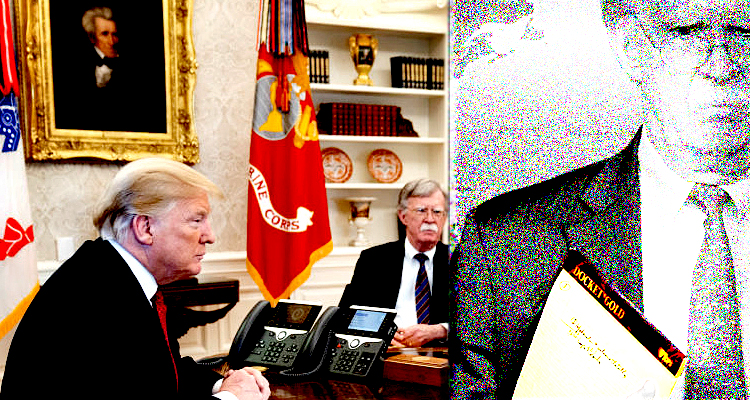 For a long time, the POTUS has repeated that regime change and war are not necessarily the appropriate end-game well before he campaigned for president, and he has been consistent in his views and policies while in office, rather than submitting to neoconservative hawks.

It has certainly been a tumultuous 18 months for former National Security Advisor John Bolton, and it was no secret that his relationship with the White House and POTUS was treading on thin ice. His resistance to a diplomatic solution in Afghanistan to bring the troops home, an ambitious resolution to nuclear tensions with North Korea, potential engagement with the Iranian regime over the JCPOA nuclear deal failure, and efforts to resolve the political and humanitarian stalemate in Venezuela all increasingly left Bolton on the sidelines.

“Bolton, who has long advocated an expansive military presence around the world, has become a staunch internal foe of an emerging peace deal aimed at ending America’s longest war, the officials said. His opposition to the diplomatic effort in Afghanistan has irritated President Trump, these officials said, and led aides to leave the National Security Council out of sensitive discussions about the agreement. The sidelining of Bolton has raised questions about his influence in an administration that is seeking a troop withdrawal from Afghanistan, as well as an ambitious nuclear deal with North Korea and potential engagement with Iranian President Hassan Rouhani. Bolton, U.S. officials said, stands in opposition to those efforts, but he does so increasingly from the periphery. ‘It’s messed up on so many levels that the national security adviser isn’t involved, but trust is a real issue,’ said a senior U.S. official, one of a half-dozen who spoke on the condition of anonymity to discuss internal conversations.” – Washington Post, Aug. 30

Another issue that was reported after the planned “secret” meeting with Taliban leadership was canceled by the POTUS is that Bolton allegedly resorted to media leaks due to his sidelined status.

“People familiar with the issue said Trump grew frustrated over time with news stories about divisions in the administration that he was convinced were peddled by Bolton and his media surrogates. Over the weekend, as reports in The New York Times and other outlets laid out the back-and-forth within the administration over whether to invite the Taliban to Camp David, Trump — as well as other officials like Pompeo — grew upset at what they were sure were leaks from Bolton and his aides. ‘When the New York Times story came out, it was pretty clear that Bolton or his people had his fingerprints all over it, that it wasn’t his idea to meet with the Taliban, that it was Pompeo’s. That was the end of business. It was petty and stupid,’ said a Trump confidante familiar with the president’s thinking. A second person confirmed that explanation, saying that it was part of a pattern of leaks believed to have come from Bolton’s camp that highlighted dissent in the president’s inner circle. ‘The fundamental problem here is the president had a national security adviser who was unwilling to accept the decisions made by the president,’ this person said. ‘When they contradicted his opinion, he worked to undermine them.’” – Politico, Sep. 10

Peace comes when we can declare victory and come home. The idea that the U.S. must control nation states and police the entire world to prevent terrorism is a myth. We do not need a military presence on every acre of the planet to achieve a goal of peace, but “peace through strength” from the Reagan playbook is appropriate.

If you serve the country and work for the POTUS, you must be loyal and work with him, be a team player, and not work against the agenda. The POTUS evolved over time by transitioning from a real estate mogul and reality TV star to the reality of politicians and geopolitics, and he is entirely open to diplomacy with anyone to make a successful deal that may appear unconventional to the establishment. If you set the bar too high, such as there will be no violence or radical jihadists in Afghanistan before exiting, we will never leave.

Examples of unconventional approaches by the POTUS are the on-the-fly visit to North Korea and walking across the DMZ with Kim Jong-un, meeting with Putin despite a bureaucratic coup attempt based on a false Russian collusion narrative, and building a border wall despite mischaracterizations by media hacks and politicos that denied the crisis on our southern border. The president deserves a team that follows his agenda.

With Bolton out as National Security Advisor, we should remind ourselves of some of his blunders that include killing Bill Clinton’s deal with North Korea, hawking the U.S. into war with Iraq, and influencing the POTUS to withdraw from talks with North Korea. Keeping Bolton on board would have been a detriment to national security and a barrier to re-election in 2020. In the meantime, will a defamed but redeemable General Flynn be able to return to the NSC team in some capacity?

Michael Flynn Is Looking For A Way Out Of His Guilty Plea… “The judge asked Flynn’s defense team if it would try to argue Flynn was innocent. Powell replied that the evidence would go toward showing ‘that the entire prosecution should be dismissed for egregious government misconduct.’ Flynn hasn’t formally asked the court to dismiss the case, but Powell’s comments confirmed it’s a tactic his legal team is seriously considering. Sullivan set a hearing for Oct. 31 to hear arguments on whether the government had complied with its obligations to turn over exculpatory evidence to the defense often referred to as ‘Brady’ material after a landmark 1963 US Supreme Court decision that held that prosecutors had to turn over evidence helpful to a defendant’s case.” – BuzzFeed News, Sep. 10

Vintage Metallica – For Whom the Bell Tolls (Official-Unofficial) Music Video