It soon wastes, exhausts, and murders itself.

There never was a democracy yet that did not commit suicide.”

The United States is not a democracy; it is a constitutional republic. The political and history illiterate are attempting to shove the mob rules version of government down your throat with histrionic presidential campaign rhetoric disguised as debates. No American founding document mentions democracy because it is dangerous to the rights of any minority. The cretinous socialists who are seeking to dominate will eventually rob you blind until you wake up and it’s too late. Unfortunately, we may have already arrived.

One of the Comrades’ Free Stuff Programs Will Cost $32 Trillion – “The Democratic Socialists appear hell-bent on digging a much larger grave than we can crawl out of, and it does not include the current level of national debt, unfunded debt under states’ public employee, private multiemployer pension plans, and unfunded liabilities the U.S. Government is already buried under. You cannot abrogate the unions, state legislatures, Republicans, or Democrats because the voting citizenry is responsible for allowing their respective congress critters and senate slimeballs to get away with out-of-control spending policies over the course of decades. It is absurd that the progressive left (Socialists) seem to believe that the government should provide a wide range of services free of charge, including a university education, healthcare, childcare, housing, telecommunications, energy, and more to everyone, not just the neediest.” – TraderStef, Jul. 2018

Elizabeth Warren once said, “I used to line up my dollies and teach them.” The senator from Massachusetts and presidential candidate also expects you to be subordinate and subsidize an opening salvo of government spending for the Social Security Administration (SSA) to the tune of $150 billion in the first year. According to the New York Times, Pocahontas plans to hike SSA benefits by $200 a month across the board.

She believes in a fairytale that raising taxes on the upper class can solve the U.S. unfunded liabilities debacle, which are at over $200 trillion and growing. The most recent SSA Trustees report projects that the combined funds’ reserves will deplete by 2035. As of Jul. 2019, there were approximately 68 million people receiving SSA benefits, supplemental income, or both.

You Haven’t Earned Your Social Security — It’s Welfare… “I’m sorry, but no, you didn’t earn it – at least not all of it. Your SSA benefits are a gift from other taxpayers. It is not your own money coming back to you. That may be hard to accept, but it is important. Recognizing it should change your financial decisions… SSA is going broke, as I wrote last month. All would be well if the taxes people paid into SSA were enough to cover the benefits they receive. That’s just math. ‘Ah, but Congress spent the money on other things,’ you might say. That does not matter. Congress borrowed cash from the SSA trust funds and replaced it with IOUs. Social Security still ‘owns’ all that money… and it’s not enough.” – Forbes, Jul. 2018

“Back in 1960, the Supreme Court ruled that SSA is not insurance or any other kind of property. The law obligates the peasantry to make FICA contributions out of their income, but does not require the government to give you anything back. FICA is a tax, like any other. What you pay into FICA is used to calculate your benefit amount, but the congress critters can change your benefits anytime they please. They can give you more, less, or nothing at all. Your only recourse is the ballot box, so use it wisely.” – TraderStef, Jul. 2018

Warren’s tax plan consists of raising the contribution requirement on the top 2% of earners by levying a 14.8% tax on wages for those who earn $250k+ per year, to be split equally between employers and employees. Additionally, the plan imposes a new 14.8% tax on investment income for individuals making more than $250k or families making more than $400k annually.

To understand why it is impossible for the U.S. to pay the myriad of debts and promises to pay by raising taxes on the rich, watching the “10 Myths About Government Debt” by Antony Davies at the Foundation for Economic Education (FEE) is an absolute requirement. Here are a few excerpts and graphs to entice you.

Myth: The government can solve its financial problems by raising taxes.

Fact: The government raises tax rates, not taxes. Whether higher rates generate more taxes depends on how people react to the new rates. Since the 1950s, the federal government’s revenue has consistently averaged about 17 percent of the economy. This has been true regardless of fluctuations in income, payroll, corporate, capital gains and estate tax rates. There is much debate as to why this has been so; but there is no question that it has been so. Regardless of what tax rates it sets, the federal government seems only to collect 17 percent of the economy in taxes.

Federal Receipts as a % of GDP 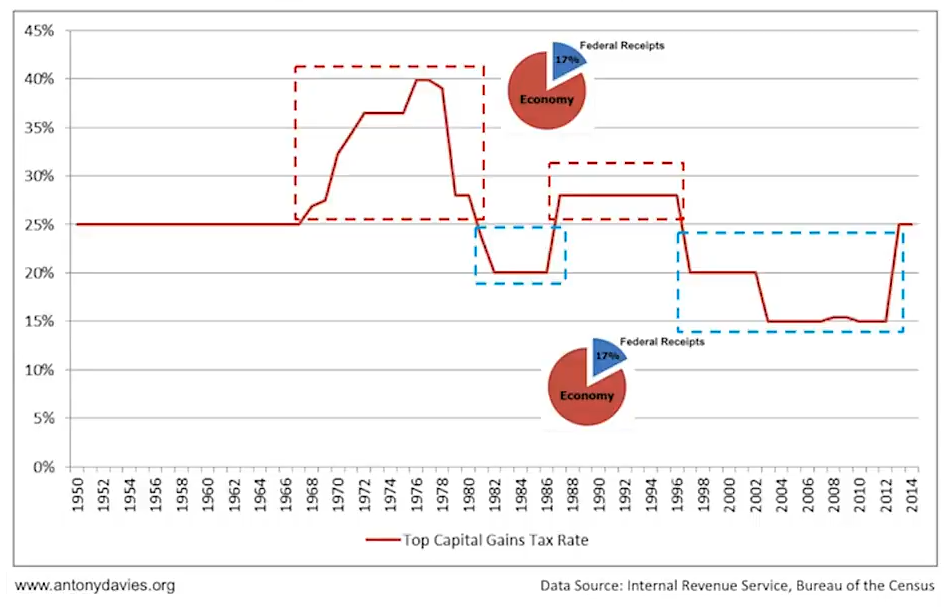 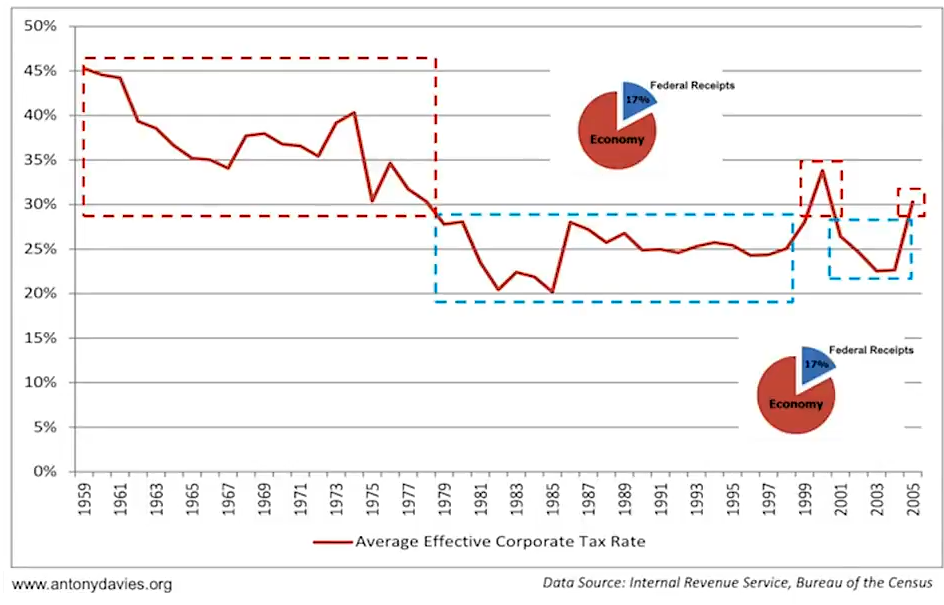 Myth: We can fix this problem by taxing the rich.

On average, when taxes are raised on the rich, capital gains, corporate profits, or estates, one year later the government collects less total tax revenue. There are only two categories where the government has raised taxes and subsequent government revenue has gone up. Those are SSA and Medicare, which are taxes that fall more heavily on the poor and middle class. On average, the top 40% are net payers into the federal government. Every time someone says we should cut taxes, someone else says you mean tax cuts for the rich. The truth is that the tax system has become so progressive that every tax cut is for the rich because they are the only people who are actually paying.

According to John Stossel’s “Free Stuff 2020” report, the winner of how much free stuff a candidate is offering for votes is Kamala Harris. A nursing home resident recently schooled Kamala Harris on spending and taxes with one question and one recommendation.

Wrapping up this rant today is a short story to lambast the politically correct culture that is drowning out the good of young souls with an entrepreneurial spirit. This young boy is trying to earn his way to college instead of expecting a handout from socialists, imposing upon his family, or stunting his financial future with student loan debt.