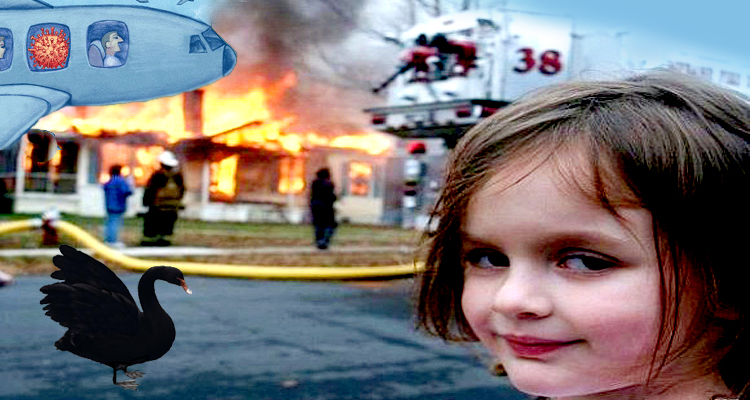 If you fell behind the coronavirus (COVID-19) pandemic curve, I am keeping four Twitter threads alive that originate from articles I penned to include updated information since Jan. 21 on its global spread, the potential and realized impacts on the domestic and global economy, a juxtaposition on the 1918 Spanish flu, and the Fed’s ongoing response after the music stopped in mid-February. Not only are the Fed and global economy burning down, but also my patience at times after two months of reporting the available facts on this horror show, as conspiracyville’s normalcy bias ignored the need for heightened situational awareness, risk management, and prudent preparation.

US Must Prepare for Thousands of COVID-19 Cases in Coming Weeks, Experts Warn… “Speaking at the Senate Homeland Security and Governmental Affairs Committee on Wednesday, Asha George, executive director of the Bipartisan Commission on Biodefense, said that the U.S. should be preparing ahead for cases of coronavirus in the thousands. ‘I don’t think we should be planning for the onesie-twosie cases that we’ve been seeing thus far in the United States… we have to plan for the possibility that we have thousands of cases.’” – EpochTimes, Feb. 13

World Health Organization declares the coronavirus outbreak a global pandemic… “‘This is a reality check for every government on the planet: Wake up. Get ready. This virus may be on its way and you need to be ready. You have a duty to your citizens, you have a duty to the world to be ready.’  Dr. Mike Ryan said on Feb. 28, executive director of WHO’s health emergencies program.” – CNBC, Mar. 11

“A woman posted online a call for help (video), saying that her mother was discharged from a temporary (Fangcang) hospital in Wuhan without being cured. Her condition has worsened but the hospital refused to take her because she tested negative. Similar cases occurred elsewhere.” – China in Focus NTD, Mar. 15

“For all folks who claim current situation is just overblown panic. Keep it simple, break the virus’s cycle of infecting at R-nought 4-8 value by staythefuckhome.com as much as possible and get over your irresponsible self.” – TraderStef 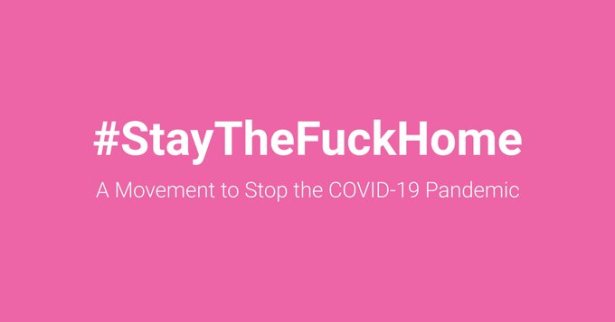 Countries With Major Coronavirus Outbreak Clusters Delayed Response Due to Strategic Ties with China… “including Italy, South Korea, and Iran—facilitated the spread of the coronavirus that has now emerged as a pandemic, according to WHO.” – EpochTimes, Mar. 15

With recent evidence that patients in China were diagnosed with COVID-19 as early as mid-November, it is more likely that the virus began stealthily spreading across the world much earlier than previous estimates. Based on records from past pandemics (i.e., 1918 Pandemic), there are typically three waves. Whether the world is currently in the first wave or transitioning into a second is still open to speculation, and next fall should set the record straight.

There is a treasure trove of data we could rehash to emphasize the virulence of COVID-19 and the potential crisis the U.S. is facing. Instead, I offer you a Mar. 13 interview with Johns Hopkins University Professor of Public Health Dr. Marty Makary and a chart that plots three waves of the 1918 pandemic that Dr. Makary referenced. 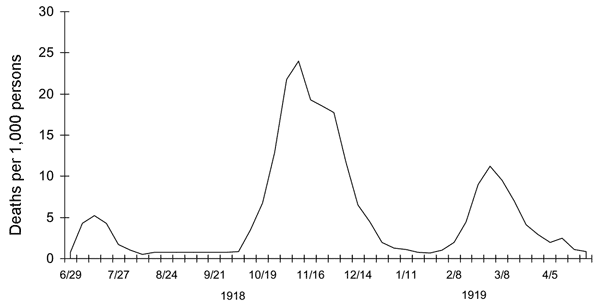 “People need to take this seriously… Stop all nonessential activity… Do not believe the numbers you see… I think we have up to 500,000 cases walking around in the United State.” – Dr. Makary

“Any hint that the coronavirus is reaching epidemic proportions on U.S. soil will likely force the Fed’s hand to pursue more aggressive REPO operations and/or quantitative easing (QE), which could push real interest rates below zero and possibly deter foreign capital inflows that help prop up the stock market and sovereign debt. What may offset any decrease in purchases of our debt is domestic safe-haven demand. The fear factor associated with coronavirus running wild on U.S. soil would negatively influence consumer spending, and that is the last leg holding up the economy.” – TraderStef, Feb. 16

A Bank in Midtown Is Cleaned Out of $100 Bills… “So many people sought huge sums that the bank branch, at 52nd Street and Park Avenue, temporarily ran out of $100 bills to fulfill large withdrawals, according to three people familiar with the branch’s operations. The shortage hit after a rash of requests for as much as $50,000, said two people who witnessed the rush.” – NYT, Mar. 14

As of today, society and economies in the West are shutting down, and many companies will experience a massive cash squeeze. Lines of credit are being drawn down and a need for large sums of money in commercial paper will likely take place. In the meantime, businesses and consumers are withdrawing cash from money market funds and the financial plumbing. Who is going to buy the commercial paper if capital is flying out the back door?

Wall Street fears ‘flashbacks to 2008’ with forced selling in $9 trillion U.S. corporate bond market… “Market pundits suggest whole industries like airlines and energy could go underwater without support from the federal government… As a result, investors are now eyeing the potential for a crunch in the market for corporate debt and even bankruptcies after the rapid credit growth since the 2008 financial crisis as businesses took advantage of low interest rates to leverage up and boost their profits.” – MarketWatch, Mar. 14

While typing this article, the total of rare inter-meeting announcements from the Fed this month increased to two!

Fed Cuts Main Interest Rate to Near Zero, to Boost Assets by $700 Billion… “The Federal Reserve swept into action on Sunday in a new bid to save the U.S. economy from the fallout of the coronavirus, cutting its benchmark interest rate by a full percentage point to near zero and promising to boost its bond holdings by at least $700 billion. The central bank also announced several other actions, including letting banks borrow from the discount window for as long as 90 days and reducing reserve requirement ratios to zero percent.” – Bloomberg, Mar. 15

Finally, let us address the situation that occurred in the paper gold market since the end of February. Last week, margin calls rolled in due to a massive plunge in stock markets, and deep pockets needed cash to cover. As a replay of what occurred in the middle of the Great Financial Crisis, gold is the most liquid asset on the planet and contracts were sold to raise cash for margin calls. Take note of how high levels of margin debt were as of February. 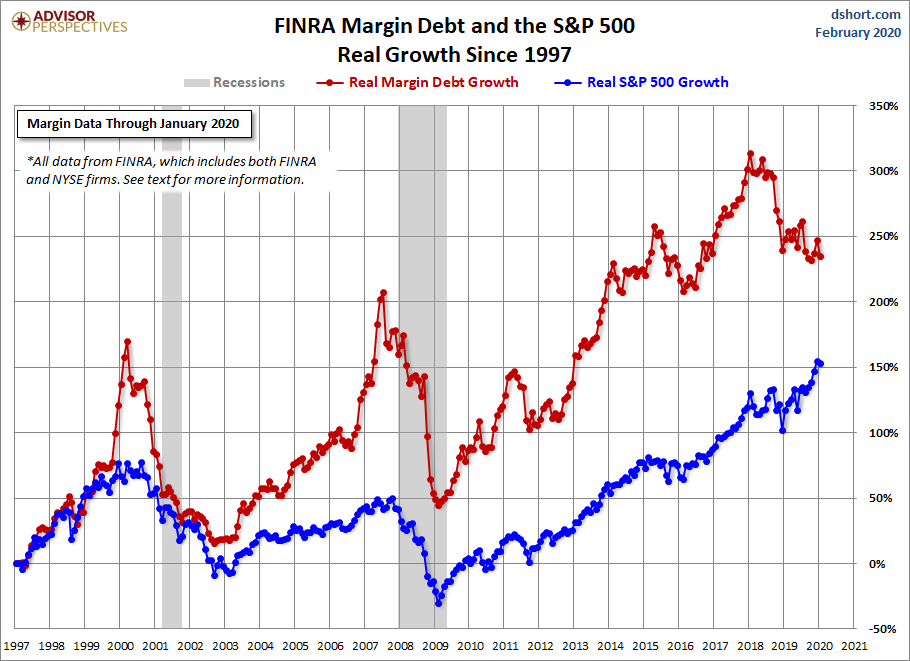 “Despite the price action in gold, it remains in a BULLISH up trend and price has not broken-down below the 50 EMA on the daily. Weak hands-ie hedge fund momo-players flushed & commercials covered shorts, book squaring expiry at end of month & margin calls.” – TraderStef, Feb. 28

“The fact that Treasuries, munis, and gold are getting hit tells me that everything is for sale right now. One giant margin call where even the safe-havens are not safe.” – David Rosenberg, Mar. 12

“Why are the long bond and gold getting hit hard by liquidations? Hoisington Management (Lacy Hunt), a major bond fund manager, says redemptions and payout requirements are forcing pension funds and other managers to sell liquid winners rather than illiquid losers in high yield debt and stocks.” – Seabridge Gold, Mar. 13

“Confirmation from (Mar. 13) the Financial Times that Swiss banks saw gold being liquidated en masse to meet margin calls. Moral: In a liquidity crisis, one sells not what one wants but what is most liquid & gold is never illiquid, which is why Central Banks hold large bullion reserves.” – Simon Mikhailovich, Mar. 15 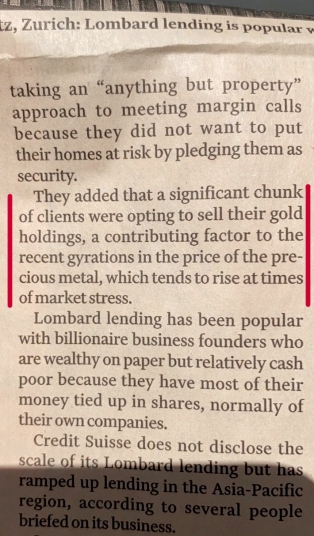 On Friday, Mar. 13, numerous precious metal dealers experienced a deluge of orders for silver and gold, which severely affected their ability to fulfill requests and/or deliver existing orders, and the U.S. Mint ran out of American Silver Eagles. 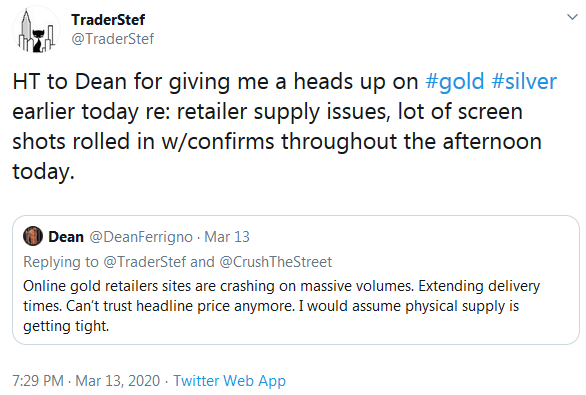 Fusion analysis can be prophetic.

“Gold’s primary bull (accumulation phase vs. secular bull) liftoff in 2016 remains intact and is having healthy bouts of consolidation and bullish chart patterns along the way… We cannot conclude that there is a bearish three-candle Evening Doji Star pattern because March does not exist yet. When considering the daily and weekly chart closes, the most likely scenario will be a period of chop and consolidation because gold is fast approaching the doldrums of early spring due to seasonality patterns. All of those variables could be instantly whacked into submission if the Fed suddenly announces additional accommodative monetary policy measures in response to the COVID-19 pandemic.”

To view a larger version of the following charts, right-click on them and choose your “view image” option. 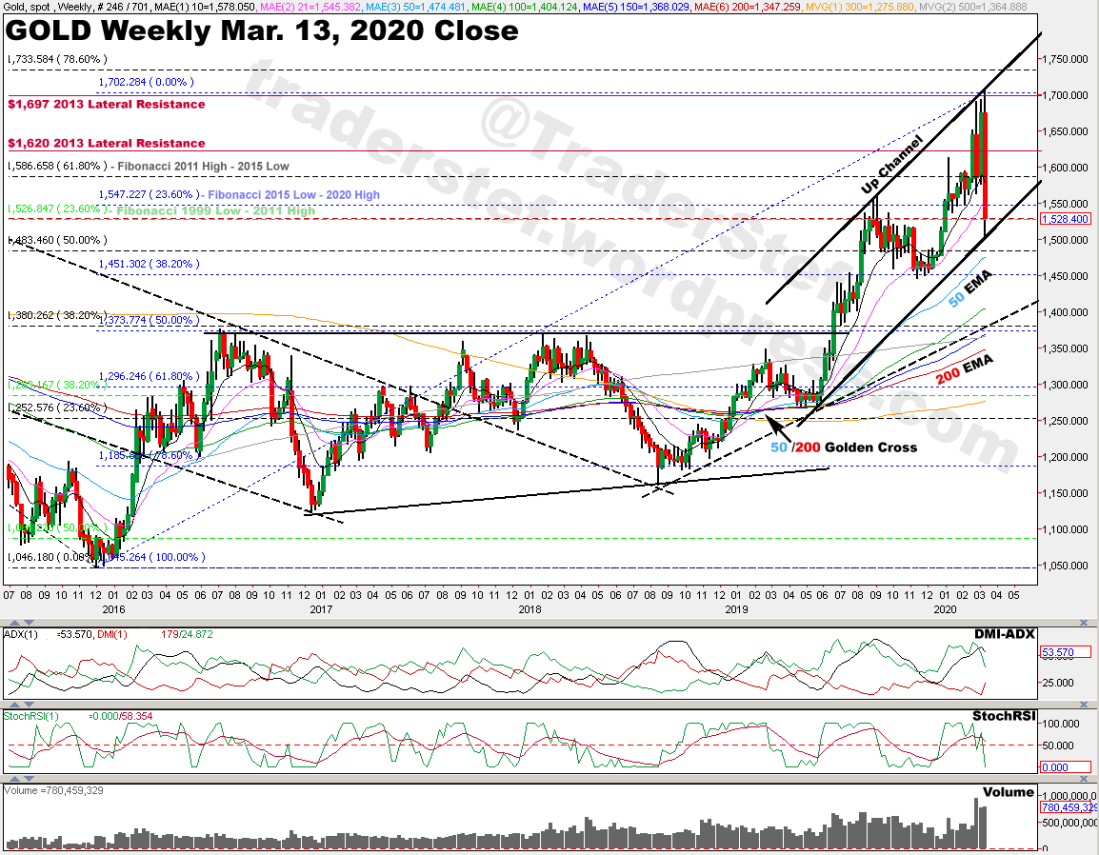 The market just opened a few moments ago at 6 pm EDT and gold spiked to $1,575. It is time to go watch the market and see what happens overnight. 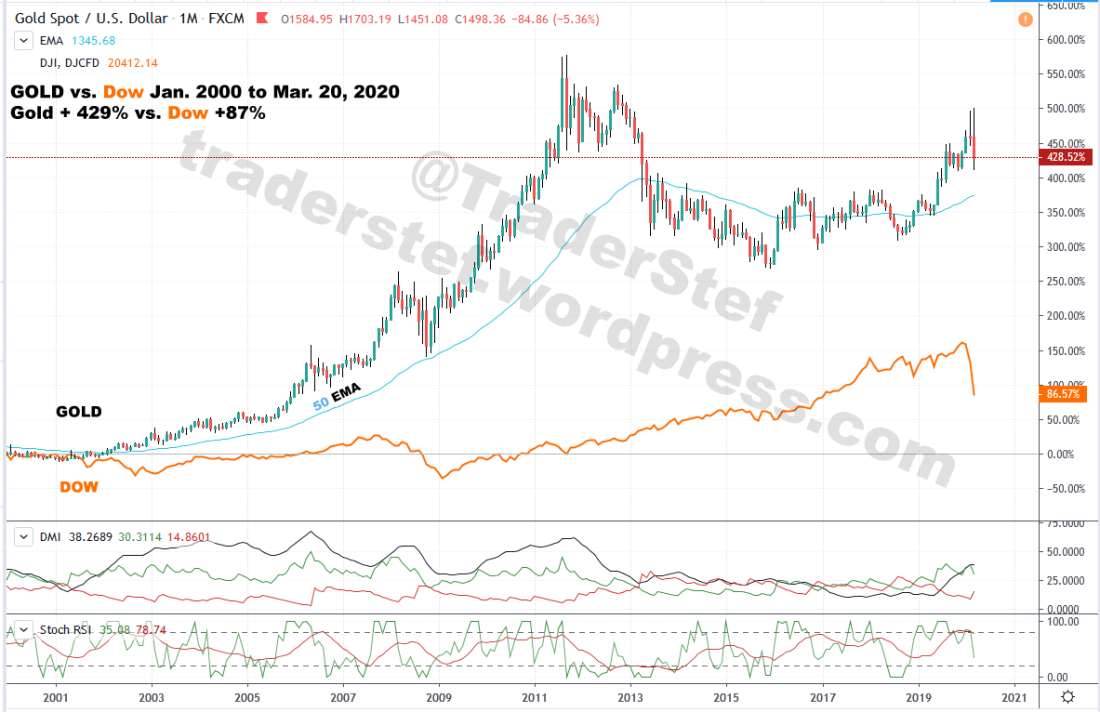